As plastic is made from oil and oil is made from dead dinosaurs, how much actual real dinosaur is there in a plastic dinosaur?

Coal and oil are called "fossil fuels" because they formed over millions of years from the remains of dead organisms buried underground. The standard answer to "what kind of dead stuff does the oil in the ground come from?" is "marine plankton and algae." In other words, there are no dinosaur fossils in those fossil fuels.

Except that's not quite right.

Most of us only see oil in its refined forms—kerosene, plastics, and the stuff that comes out of gas pumps—so it's easy to imagine the source as some uniform black bubbly material.

But fossil fuels bear fingerprints of their creation. The various characteristics of these fuels—coal, oil, and natural gas—depend on the organisms that went into it and what happened to them. It depends on where they lived, how they died, where their bodies ended up, and what kinds of temperature and pressure they experienced.

The dead matter carries its story—altered and jumbled in various ways—for millions of years. After we dig it up, we spend a lot of effort stripping the evidence of this story away, refining the complex hydrocarbons into uniform fuels. When we burn the fuels, their story is finally erased, and the Jurassic sunlight that was bound up in them is released to power our cars.[1]Through photosynthesis, organisms used sunlight to bind carbon dioxide and water into complex molecules. When we burn their oil, we finally return that CO2 and water to the atmosphere—liberating millions of years worth of stored carbon dioxide all at once. This has some consequences. 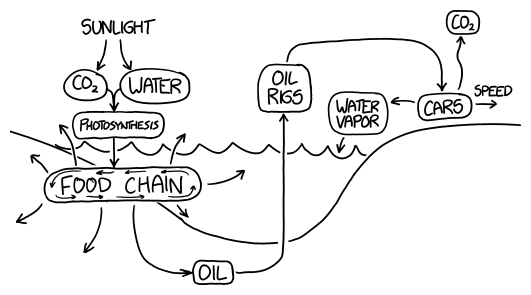 The story carried by rocks is a complicated one. Sometimes pieces are missing, discarded, or transformed in a way that misleads us. Geologists—both in academia and the oil industry—work patiently to reconstruct different aspects of these stories and understand what the evidence is telling us.[2]My favorite book about Earth science, Walter Alvarez's T. rex and the Crater of Doom, is a firsthand account of the research that determined what killed the dinosaurs. The story is told not as a contest between rival academic theories, but as the unraveling of a mystery through detective work.

Most oil comes from ocean life buried on the seabed. But the poetic idea that our fuels contain dinosaur ghosts is in some ways true as well. There are a few things required for oil to form, including quick burial of large amounts of hydrogen-rich organic matter in a low-oxygen environment.[3]Because, in a sense, oxygen will cause the fuel to burn.

These conditions are most often met in shallow seas near continental shelves, where periodic nutrient-rich upwellings from the deep sea cause blooms of plankton and algae. These temporary blooms soon burn themselves out, dying and falling to the oxygen-poor seabed as marine snow. If they're quickly buried, they may eventually form oil or gas. Land life, on the other hand, is more likely to form peat and eventually coal.

But hydrocarbon formation is a multi-step process[4]You can read more about it here. and lots of things can affect it. A huge amount of organic material washes into the ocean, and while most of it doesn't end up in oil-producing sediments, some of it does.[5]If you want to spend a day reading a bunch of articles on hydrocarbons and ocean sedimentation, you can check out a few here, here, here (paywall), here, and here. If you get tired halfway through, like I did, and want a change of pace, you can instead read an insane conspiracy theory website claiming that oil is not dead organic matter and that there's actually an infinite supply of it. This fact is apparently concealed from us by the New World Order and/or the Illuminati. Some oil fields—like Australia's—seem to have a lot of terrestrial sources. Most of this is plants, but some is certainly animals.[6]And it's worth noting that there were some aquatic dinosaurs—like Spinosaurus. 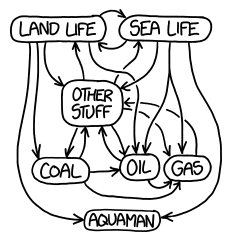 No matter where it came from, only a small fraction of the oil in your plastic dinosaur could be directly from real dinosaur corpses. If it came from a Mesozoic-era oil field fed heavily by land matter, it might contain a slightly larger share of dinosaurs; if it came from a pre-Mesozoic field sealed beneath caprock, it might contain no dinosaur at all. There's no way to know without painstakingly tracing every step of the manufacturing process of your particular toy.

In a broader sense, all water in the ocean has at some point been part of a dinosaur. When this water is used in photosynthesis, bits of it are used to build the fats and carbohydrates in the food chain—but a lot more of that water is in your body right now.

In other words, your plastic toys contain a lot less dinosaur than you do. 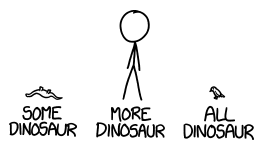