As a writer, I'm wondering what would be the cumulative energy of the hundreds of thousands of keystrokes required to write a novel.

You probably shouldn't invest in a keyboard-based generator any time soon.

People like figuring out places where we can recover "wasted" energy. Avoiding waste is a great goal, but sometimes it's hard to judge how much energy is actually moving around in a particular system. Cool-sounding ideas like the recent "Solar Freaking Roadways" campaign don't always work out when you run the numbers. On the other hand, some clever ideas for collecting waste—like recovering the energy from doors opening or cars braking—turn out to be totally practical. 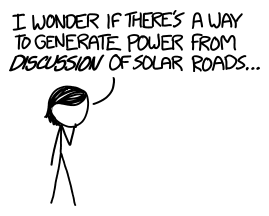 In the case of keyboards, there's a lot of engineering research into the force required to press keys, in part because so many people suffer from repetitive strain injuries. Using data from a study of rubber-dome keyboards—the most common type these days—we can estimate that the energy required to press a key is around 1.5 millijoules for a letter key and 2.5 for a big key like the enter key or spacebar.

How much is 1.5 millijoules? Well, it's enough to heat a drop of water by 1% of a degree. It's also enough to lift a squirrel 300 microns—all the way from the ground to the top of a stack of four sheets of paper! 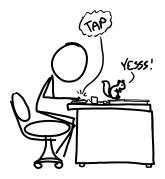 Now that we know how much energy a keypress takes, we need to figure out how many keypresses are involved in writing a novel.

A typical novel might have half a million to a million characters in it,[1]Letters, I mean, although I can think of a book series which comes close on the other kind. so typing it out would require at least that many keypresses. The amount of backspacing and rewriting varies wildly from person to person. Some people write straight through without pausing, while others rewrite every sentence endlessly.

It turns out not to make a big difference which kind of writer you are. If you write straight through without editing, you'd expend about a kilojoule. With a lot of rewrites, you might expend several kilojoules—but you'd need to rewrite every word 10 times to match the energy stored in a single AA battery.

Writing one full novel would provide enough energy to run a laptop for a total of about 15 seconds. If each novel takes you six months, you'd spend one second out of every million running off keyboard power. This would save a fraction of a penny of electricity.

Now, a few novels every six months seems like a lot of typing, but plenty of people type more. The site WhatPulse offers tools to track mouse clicks and keystrokes, and hosts a community of users who post their statistics online and compete with each other to accumulate the highest total. 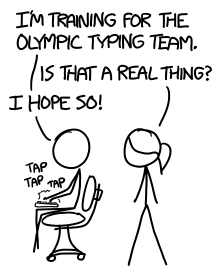 WhatPulse been running for more than a decade, and its oldest and the most active users have logged over 100 million keypresses. A heavy WhatPulse user types the equivalent of one novel every two months, and some of them manage one novel every few weeks.

However, that's still not fast enough to represent a lot of energy. To keep a laptop running from keypress power alone, you'd need to write a novel every ten seconds. To run a microwave would require one novel per second.[2]It would also require near-relativistic finger speeds, which would require impossible forces, huge amounts of extra energy for control, and would promptly destroy your hands AND the keyboard. 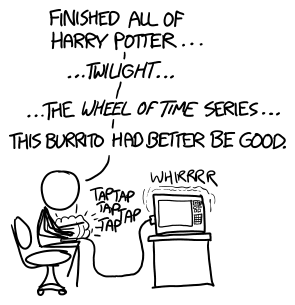 No matter how fast you type, writing isn't exercise.