What would happen if all the bodies of water on Earth magically disappeared?

As is often the case with these questions, everyone would die.

The first people to notice would be swimmers and boaters, for obvious reasons. 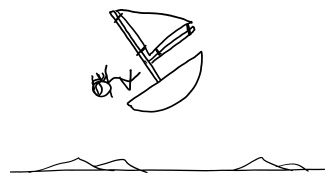 To avoid a glass half empty scenario, we'll assume the water is replaced by air.

Most people swim in water which is relatively shallow, so most of them would survive the fall to the bottom, albeit with a few broken bones.[1]Those swimming in quarries and glacial lakes, on the other hand, could easily fall to their deaths a few feet from shore. People out on the ocean, on the other hand, would be in trouble.

The ones in shallow water would hit bottom first, since they wouldn't have as far to fall. Within the first second, a large fraction of the boats in lakes, rivers, and harbors would crash into the bottom, and many of those on board would survive.

Boats out on the ocean would take longer to fall. Over the next five seconds, a wave of crashes would spread outward from the continents, as boats struck the continental shelf farther and farther from shore. These boats would be smashed to tiny fragments, killing everyone on board.

After the first six or seven seconds, there would be a brief lull in the ship destruction rate. Continental shelves drop off steeply, and most of the ships out over the deep sea would take a little longer to fall.

The Titanic sank in about two miles of water. After it disappeared beneath the surface, the two halves of the ship took between 5 and 15 minutes to reach the bottom.[2]When the Titanic bow hit the sea floor, it was moving at almost exactly the same speed as when it struck the iceberg three hours earlier. (This is not quite a coincidence.) Without the ocean there, it would have reached the bottom in about 30 seconds, striking it at airliner cruising speed.[3]Although no one has ever dropped a cruise ship from a high altitude,[citation needed] their terminal velocity at the surface is probably a little below the speed of sound. Because the air in the ocean basins would be compressed, the terminal velocity of ships near the bottom would be lower than at the surface. This compression also means that to magically replace the water, you'd need more air than you'd expect from the ocean's volume alone, since it would need a varying density profile. In other words, your water-replacement spells will need to have some calculations behind them.

Within the first minute, just about every large ship would be on the bottom. The final boat to reach the bottom would probably be a small sailboat or life raft that was crossing an ocean trench when the water vanished. Thanks to low weight and/or drag from the sails, one of these vessels could take many minutes to reach the bottom.

If there were a seaplane floating on the deep ocean, it could conceivably survive, although it would take some luck and quick thinking by the pilot. The plane would initially drop, but as it gained speed it would tend to pull into a glide. After the initial shock, the pilot would have a reasonable amount of time to try to start the engine. Thanks in part to the thicker air, it's possible a seaplane could successfully land on a smooth patch of seabed. If the engine got started, the pilot could also try to fly to shore and land on a runway.

Fish, whales, and dolphins, and nearly all marine life would die immediately. Those near the bottom would suffocate or dessicate, while those near the surface in deeper water would suffer the same fate as boats. 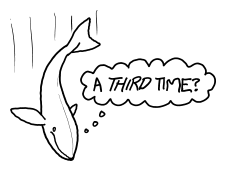 Then the really weird stuff starts.

Without evaporation from lakes and oceans feeding the water cycle, it would stop raining. Without pools of water to drink from, people and most animals would dehydrate and die in a matter of days. Within a few weeks, plants would start withering in the ever-drier air. Within months, mass forest die-offs would begin.[4]Some drought-resistant trees could survive for years, but others wouldn't.

Huge amounts of dry, dead vegetation lead inevitably to fire, and within a few years, most of the world's forests would have burned. Forests store huge amounts of CO2, and this burning would roughly double the amount of greenhouse gas in the atmosphere, accelerating global warming.

All in all, Joanna's scenario would result in virtually all life dying out pretty fast. But then things would get even worse. 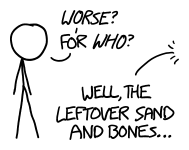 Without a water cycle to weather rocks, the carbon-silicate feedback system which acts as a long-term thermostat to stabilize climate[5]CO2 is added to the atmosphere by volcanoes (although at the moment, it's being added about ten times faster by people.) When water flows over certain rocks, chemical reactions suck CO2 from the air and eventually bury it in seafloor sediments. With less CO2, the planet gets colder. A colder planet means less evaporation, which means less weathering, which means CO2 removal slows down. This feedback loop—which operates over much longer timescales than human-caused climate change—is probably what's kept the Earth's temperature relatively stable over the last few billion years (give or take a few snowball Earths) even though the Sun has gotten hotter. would shut down. Without this feedback, volcanic CO2 would build up in our atmosphere, leading—in the long term—to scorching temperatures similar to what's happened on Venus.[6]Interestingly, because of Venus's lighter color (and thus higher reflectivity), it only absorbs about half the solar radiation that Earth does despite being substantially closer to the Sun. The thick blanket of CO2 in its atmosphere is what keeps it hot.

We were going to lose our oceans anyway. As the Sun gets hotter, eventually water will start escaping through evaporation, and—one way or another—the planet will dry out and heat up. However, the loss of the oceans never seemed like something worth worrying too much about, since it's a billion years in the future. The oceans will be here long after our species is gone.

Unless Joanna ruins everything.