What’s the fastest way to get a hand-written letter from my place in Chicago to my mother in New Jersey?

First, let's carefully consider the "walking" option. Who knows—maybe it's faster than it seems!

Since you didn't specify where in New Jersey your mother lives, I'm going to assume she's in Hackensack, because that's where Miss Teschmacher's mother lived.[1]You know, Superman falls into the pool almost headfirst. Why would Lex Luthor assume the necklace would stay on him in the water? This always bothered me. The rest of the movie is totally legit; this is the only thing that seems unrealistic.

Google Maps says that it would take 260 hours, or just under 11 days, to walk from Chicago to Hackensack.

Google takes you on an interesting route. For example, it cuts diagonally across farmer's fields, which seems strange, until you realize it's taking you along the Wabash Cannonball Trail, a 63-mile walking path that follows an old rail line. Clever!

On the other hand, Google makes some questionable decisions. When you get to Mifflinburg, Pennsylvania, Google has you walk down Old Turnpike Road to reach Lewisburg. This is strange, because[2]... as any schoolchild knows ... the Buffalo Valley trail runs right alongside the highway for this entire stretch, just a few hundred yards to the north of the road. But who knows—maybe Google has some secret reason for steering you away from what would otherwise be a perfect walking path. 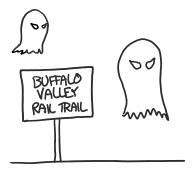 Your trip would also take you past that really weird bend in the Appalachians. Many years ago, I took my first flight across Pennsylvania, and I was totally baffled when I looked out the window and saw strange curving troughs running across the landscape. They were so smooth and regular that at first I thought they must be manmade, but they were too big and endless for that. What I was seeing was the curved troughs of the Ridge and Valley Appalachians, which curve dramatically across Pennsylvania.[3]Just a few weeks ago, researchers finally explained how that weird bend formed.

While the 10-day walk would be scenic, it's not looking like the fastest method. We'll need to try something else.

If it were 1861, you could use the Pony Express, which could move a letter over that distance in as little as 3 days. 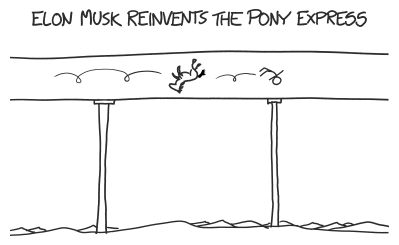 Since it's no longer 1861,[citation needed] we have better options available. FedEx offers overnight delivery, and a courier service could make the drive in a little over 12 hours.

Last year, Ed Boilan absolutely shattered the "cannonball run" record for driving from New York to Los Angeles—and broke laws in hundreds of jurisdictions in the process. His average speed was 98 mph, and while it's safe to assume he probably averaged less than this across the eastern half of his journey, if you managed to keep up his 98 mph average across your trip, you could make it from Chicago to Hackensack in 8 hours.

Airplanes are a lot faster. An airliner can cover the distance in an hour and a half, and the Concorde—back when it was still flying—could do it in 30 minutes (plus some time to take off and land).

There are other techniques, like using a rail gun to fire a message capsule down a vacuum tube, which could conceivably get your time down to 10 or 20 minutes.

But none of these beat missiles.

Over a short flight distance, an ICBM[4]In this case, an intracontinental ballistic missile. on a typical arc would take about 12 to 15 minutes to cover the distance to your mom.[5]This is probably the first time I've ever ended a sentence with those words when I wasn't making a "your mom" joke. But using depressed trajectories, a technique which should make sense to the Kerbal Space Program players out there, the time to cross the distance between you and your mother could be reduced to as little as six minutes. Of course, the letter might not be readable once the maneuver is completed, but that's ok—your mother will probably no longer be capable of reading it.

In the end, when it comes to getting a physical object to Hackensack, New Jersey as fast as possible, Lex Luthor had the right idea.

Even if not everything he said made sense.