Could a person walk the entire city of NY in their lifetime? (including inside apartments)

But what if it weren't? Can we figure out the answer from things we already know? Let's look at a few ways of estimating it.

First of all, how wide is a street? I've never seen one of those flashing crosswalk countdowns signs start with less than 10 seconds; if people walk at a meter per second, most roads are probably at least 10 meters wide.[1]There's a table from the 1892 World Almanac listing the widths of all avenues and streets in Manhattan, as well as the lengths of all the blocks, confirming that even in 1892 the streets were at least 20 meters wide. I found a copy of the table over at the blog Stuff Nobody Cares About.

Most people wouldn't have trouble walking 10 kilometers (6 miles) in a day. If the city were covered in kilometer-long streets laid down edge-to-edge, with no space between them, you could fit a thousand roads side-by-side in 10 kilometers. That means a person could walk back and forth across an entire 10km by 10km grid in, at most, 3 years.[2]On the streets. You have to add another 3 years for the avenues.

I don't know how many 10 km square swatches it takes to cover New York City, but it's probably not very many.[3]Turns out it's a little more than 1 to cover the land and water. And since NYC has some space not occupied by streets, this tells us that the answer to the first part of Asaf's question is almost certainly "yes"—purely from a geometry standpoint.[4]Another way to come at this calculation is to remember that Manhattan streets are numbered, and you never see four-digit numbers.

Here's another approach: I happen to remember that the US Postal Service employs about half a million people. NYC's population is almost 10 million people,[5]The city itself is about 8.5 million, and the metro area is about 20 million. so almost 1 out of every 35 Americans lives there.[6]I remember seeing some California politician boast that California had 14% of the country's millionaires. But 1 in 8 Americans live in California, so that's pretty close to what you'd expect. If New York also has 1 out of every 35 postal employees, that's about 15,000 people. 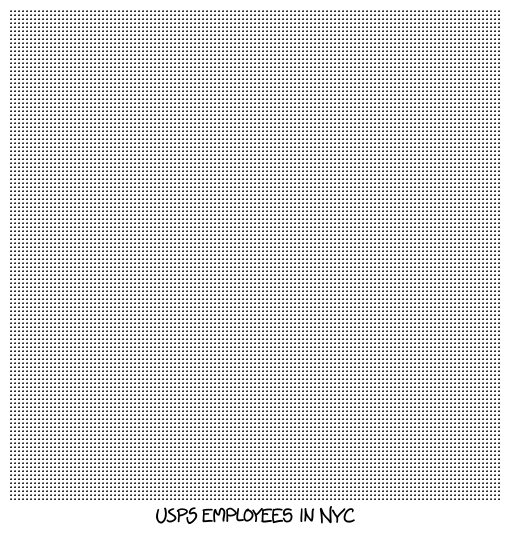 Another way: Imagine that each person lives alone in a square room measuring 10 meters by 10 meters, which is about the size of a typical two-bedroom apartment. Furthermore, let's assume that everyone's apartment is on the ground floor with at least one side facing a street. In that case, at a walking speed of 2.5 mph, it would take only 2.4 years to walk past every apartment—which Wolfram|Alpha helpfully points out is roughly 1.4 elephant gestation periods.

Any way we come at this problem, it looks like the answer is "yes"—you can walk down all the streets in New York City. And, indeed, it turns out there are 6,074 miles of road in NYC, which would take a total of a little over 100 days of walking.

Now, what about the second part of Asaf's question—walking through all the apartments?

This one is trickier. As a rule of thumb, a household is overcrowded if it has more people than rooms.[7]There are a bunch of definitions for different family sizes and methodologies, but they all end up in a pretty narrow range. But at the same time, most households don't have more than two rooms per person. Let's assume all households have 1.5 rooms per person.

If it takes 5 seconds to walk into a room and back out, then you can visit every room in New York City in 10 years. Even if you only visit rooms for eight hours a day, that's totally plausible to fit into one lifetime.

However, a word of warning to Asaf:

Under NY Penal Code §104.15, entering a dwelling without permission is a class A misdemeanor punishable by up to a year in prison.

So while it might take only 30 years to visit every apartment in New York City ... 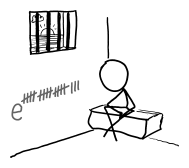 ... it could take you 2,000 millennia to serve out the resulting prison sentence.