How fast could you visit all 50 states?

—as discussed by Stephen Von Worley on Data Pointed

This week's article is a little different. Instead of answering one of your questions, I'm going to look at someone else's answer to a question, and how thinking about that answer raised some new questions of my own. Eventually, the whole thing sucked me down a rabbit hole of calculations from which I barely escaped. 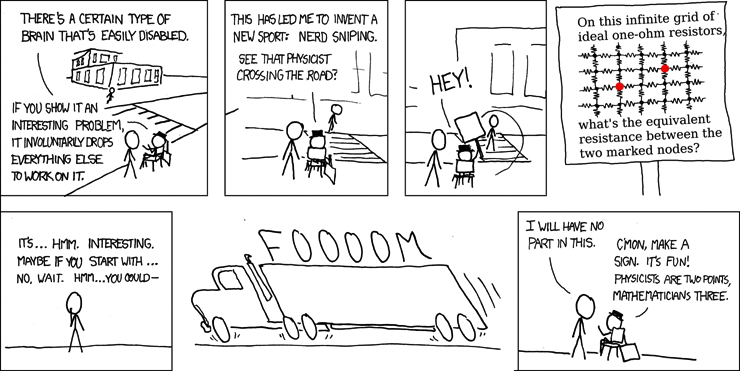 In the summer of 2012, the blog Twelve Mile Circle posted an article about the search for a 24-hour-long Google Maps route that visits as many US states as possible. They found that the maximum was about 19 or 20 states.

If you can visit 19 or 20 states in 24 hours, how long would it take to visit all 50? Stephen Von Worley read the article and did some calculating. He came up with a 6,813-mile route that visited the contiguous 48 states, then wrote an article on Data Pointed discussing how long the journey would take using different types of transportation.

And he stopped there.

Recently, someone sent me Stephen's article. I enjoyed it, but I got curious: Were there faster ways?

First of all, there are technically faster planes than the F-22. The SR-71 Blackbird is, by some measures,[1]Rocket planes are faster, but only over short distances, and usually don't take off on their own. Orbital rockets are much faster because getting to space is mainly a problem of going as fast as possible.​[2]The X-15 rocket plane, was about twice as fast as the SR-71, and is the only aircraft to fly up to space. the fastest plane. It holds the record for the fastest trip from New York to London. It's fast enough that if you fly it along the Equator going west, even with pauses to refuel, you'll see the Sun rise in the west and set in the east.[3]I just came across this positively stunning firsthand account by Bill Weaver, an SR-71 test pilot. In 1966, Weaver was flying an SR-71 at full speed, Mach 3.18, when it abruptly and catastrophically disintegrated. Somehow, he survived the breakup. He didn't eject; the plane just tore itself apart around him and scattered in all directions. In other words, he suddenly found himself flying along at Mach 3.18 ... without his plane. It's a mind-boggling story. If you relax the requirement to land—so you just need to pass over the borders into the state—an SR-71 using aerial refueling could fly Stephen's route—plus trips to Juneau and Honolulu—in about 7 hours.[4]Or possibly more. It couldn't fly his route exactly, since at full speed the plane's turning radius is something like 100 miles.

And if we're not bothering to land in each state—if we're just trying to through the state's airspace—some new possibilities open up. This is where I got thoroughly nerd-sniped.

Satellites in orbit are an order of magnitude faster than even the SR-71. An object in low Earth orbit can cross the entire US in minutes. Furthermore, a satellite in a polar orbit will eventually pass over every state, since the Earth turns slowly under its orbital path, but hitting all 50 states this way would take many days. 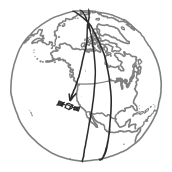 I started to wonder how many orbits were required, and whether a satellite doing carefully planned course corrections could pass over all 50 states faster than the 7+ hours needed by an aircraft.

If you allow the satellite to change course an unlimited number of times, it can just forget about orbits completely, following a twisty course that stays over the US. At that point, it simply becomes a question of how much fuel you're allowing it to have.

Instead, I started considering another version of the problem: What if your satellite that had to coast while near the US, but could fire thrusters on the far side of the Earth once per orbit, putting it on a new course for each pass? How many passes would be required to visit every state then? 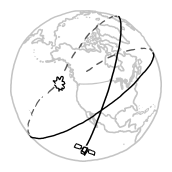 I had previously written some code for analyzing airplane routes to help me answer the question in "Flyover States" chapter in the What If book. I repurposed this code to tackle my satellite question.

For a while, the best my math could come up with was a set of six orbits that crossed all 50 states:

I decided that 6 was probably the limit; I just couldn't figure out a way to do it with 5. But I left my computer churning on the problem for an evening, searching through combinations of orbits, and yesterday morning ...

Those 5 orbits cross over all 50 states ... and DC, for good measure. They're all slightly curved, since the Earth is turning under the satellites, but it turns out that this arrangement of lines also works for the much simpler version of the question that ignores orbital motion: "How many straight (great-circle) lines does it take to intersect every state?" For both versions of the question, my best answer is a version of the arrangement above.

I don't know for sure that 5 is the absolute minimum; it's possible there's a way to do it with four, but my guess is that there isn't. Perhaps there's a way to get just the 48 contiguous states with 4 lines, but I haven't found it yet.

If you want to play with arrangements of lines, you can use the Google Earth path-drawing tool. It's a little clumsy, but it works. If anyone finds a way (or proof that it's impossible) I'd love to see it!

Bringing things back to Stephen's original question, the 5 orbits (four, really, since you could start and end over on the US side) would take just over six hours to complete, including the three maneuvers over the Indian Ocean. In other words, in a spacecraft, you could beat even the fastest airplane.

Of course, those right-angle turns would take a lot of fuel—and, as mentioned before—if you were really trying to set this record, you would just need to get as much fuel as possible and fly a space figure-8 that stayed above the country.[5]Or in a hyperloop, I guess.

Either way, one thing's for sure: In the time I spent doing all that calculation, I probably could have just visited all those states by walking.

But the calculating was fun.