Believe it or not, this wouldn't even warm you.

The temperature of the surface of the Sun is about 5,800 K,[1]Or °C. When temperatures start having many digits in them, it doesn't really matter. give or take. If you stayed there for a while, you'd be cooked to a cinder, but a nanosecond is not very long—it's enough time for light to travel almost exactly a foot.[2]A light-nanosecond is 11.8 inches (0.29981 meters), which is annoyingly close to a foot. I think it would be nice to redefine the foot as exactly 1 light nanosecond. Because we don't have enough unit confusion in the world already. 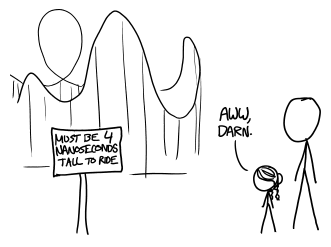 I'm going to assume you're facing toward the Sun. In general, you should avoid looking directly at the Sun, but it's hard to avoid when it takes up a full 180 degrees of your view. 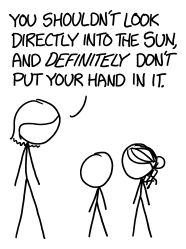 In that nanosecond, about a microjoule of energy would enter your eye.

A microjoule of light is not a lot. If you stare at a computer monitor with your eyes closed, then open them and shut them quickly, your eye will take in about as much light from the screen during your reverse blink[3]Is there a word for that? There should be a word for that. as it would during a nanosecond on the Sun's surface.

During the nanosecond on the Sun, photons from the Sun would flood into your eye and strike your retinal cells. Then, at the end of the nanosecond, you'd jump back home. At this point, the retinal cells wouldn't even have begun responding. Over the next few million nanoseconds (milliseconds) the retinal cells—having absorbed a bunch of light energy—would get into gear and start signaling your brain that something had happened. 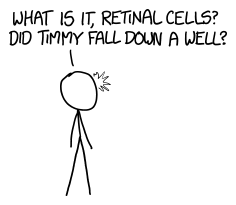 You would spend one nanosecond on the Sun, but it would take 30,000,000 nanoseconds for your brain to notice. From your point of view, all you would see was a flash. The flash would seem to last much longer than your time on the Sun, only fading as your retinal cells quieted down.

The energy absorbed by your skin would be minor—about 10-5 joules per cm2 of exposed skin. For comparison, according to the IEEE P1584 standard (as quoted on ArcAdvisor.com), holding your finger in the blue flame of a butane lighter for one second delivers about 5 joules per cm2 to the skin, which is roughly the threshold for receiving a second-degree burn. The heat during your Sun visit would be five orders of magnitude weaker. Other than the dim flash in your eyes, you wouldn't even notice.

But what if you got the coordinates wrong?

The Sun's surface is relatively cool. It's hotter than, like, Phoenix,[citation needed] but compared to the interior, it's downright chilly. The surface is a few thousand degrees, but the interior is a few million degrees.[4]The corona, the thin gas high above the surface, is also several million degrees, and no one knows why. What if you spent a nanosecond there? 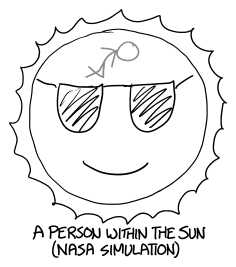 The Stefan-Boltzmann law lets us calculate how much heat you'd be exposed to while inside the Sun.[5]There's also direct pressure from the heavy particles, protons and stuff, bouncing around, but the radiation turns out to be the dominant component.

I'm going to hijack this note to ask another question: How does this transporter work, anyway?

When you teleport somewhere, presumably it does gets rid of the matter that was in the way, so you don't end up combining yourself with whatever was there. A simple solution is to have the teleporters swap matter between the two locations. Kirk gets teleported down to the planet, a Kirk-sized chunk of air gets teleported up to the Enterprise.

So what would happen if an AJ-shaped chunk of Sun-interior gets teleported to snowy Colorado, then we just left it there?

The protons inside the Sun bounce around at speeds of about 350 km/s (about half of the Sun's escape velocity at that depth, for weird and deep reasons.) Freed from their crushingly hot neighborhood, the whole collection of protons would burst outward, pouring light and heat energy into their surroundings. The energy released would be somewhere between a large bomb and a small nuclear weapon. It's not good. You would exceed the IEEE P1584B standard for second-degree burns after one femtosecond in the Sun.[6]Although it wouldn't be a second-degree burn until many picoseconds later, since the definition of a second-degree burn is one which damages some of the underlying layers of tissue—and in the first few femtoseconds, light wouldn't have time to reach the underlying tissue. A nanosecond—the time you're spending there—is 1,000,000 femtoseconds. This does not end well for you.

There's some good news: Deep in the Sun, the photons carrying energy around have very short wavelengths—they're mostly a mix of what we'd consider hard and soft X-rays.[7]<what_if_book_reference>I wonder if there are more soft or hard x-ray photons in the universe.</what_if_book_reference> This means they penetrate your body to various depths, heating your internal organs and also ionizing your DNA, causing irreversible damage before they even start burning you. Looking back, I notice that I started this paragraph with "there's some good news." I don't know why I did that.

In Greek legend, Icarus flew too close to the Sun, and the heat melted his wings and he fell to his death. But "melting" is a phase change which is a function of temperature, a measure of internal energy, which is the integral of incident power flux over time. His wings didn't melt because he flew too close to the Sun, they melted because he spent too much time there.

Visit briefly, in little hops, and you can go anywhere. 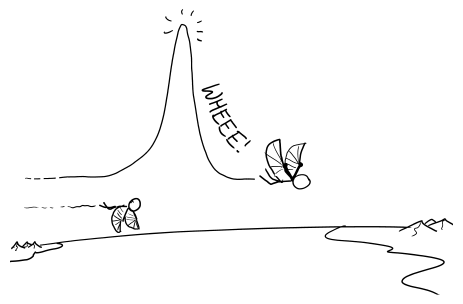