What if people's incomes appeared around them as cash in real time? How much would you need to make to be in real trouble?

The US federal minimum wage in the US is \$7.25/hour, which is about \$15,000/year for a full-time job. If you earn the minimum wage, you make a penny every 5 seconds during work hours, or every 20 seconds if you average it over your whole week.

Someone making minimum wage in pennies would earn about 30 lbs of pennies per workday. Two weeks' worth of pay in pennies would fill a small carry-on suitcase. At 150 lbs, the suitcase would probably be too heavy to pick up. However, if they were paid in quarters instead of pennies, two weeks' pay would only weigh about 3 lbs.

If paid in a typical mix of loose change,[1]The makeup of a "mix of loose change" depends on your spending habits. Lots of people have calculated this to estimate the amounts of change in a jar. One of the more careful theoretical calculation I've seen, which considers prices and sales tax, comes from Dan Kozikowski.

Since I've spent way too much time on this question over the years, for the record: If you're ever trying to guess the value of coins in a jar, my suggestion would be \$13.05/lb and \$468/gallon if the person doesn't use quarters for laundry or parking, \$9.53/lb and \$336/gallon if they do, and \$16.75/lb and \$611/gallon if they discard pennies. the US federal minimum wage is about one plastic water bottle full of coins per workday, and the median household earns three or four water bottles per workday.

A CEO of a large company might make \$40,000 per workday. Assuming an 8-hour workday, that's 130 pennies per second. If paid in a mix of loose change, the CEO would earn about a water bottle of coins per minute, and a duffel bag full of loose change every hour, or 600 water bottles per workday:

If you're a CEO working in a 300 ft2 office, the change would accumulate on the ground at a rate of about only half an inch per day. (If it were pennies, it would be more like 3" per day). It would mean frequently getting up to adjust your desk so it stayed on top of the pile, and I can't imagine your chair would be too stable, but it seems like it might be manageable.

Lugging those 150-kg duffel bags to CoinStar every hour would be a hassle. If we allowed paper money, things would get easier. A dollar bill has a volume of about 1.55 mL, which means that a CEO paid in dollar bills would only need one large-ish duffel bag for a day's pay.

If paid in \$100 bills, a CEO would only need a couple of duffel bags to carry home their year's salary.

In either case, at 60-70 lbs, a duffel bag full of bills would be a little on the heavy side. 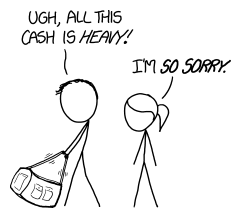 Now, there are people who make a lot more than "typical CEOs".

Mark Zuckerberg, Warren Buffett, and Bill Gates all made in the neighborhood of \$10 billion in 2013. During the workday, that's a duffel bag full of \$100 bills every half-hour.

Going back to our earlier metric, that's 25 water bottles full of change—one minimum-wage worker's daily salary—per second of the workday. 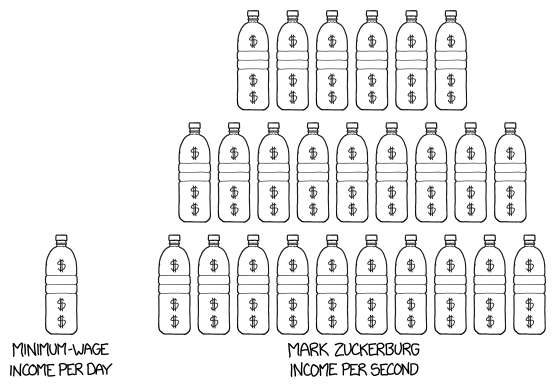 If randomly dispensed from the ceiling in the form of loose change, Mark Zuckerberg's income would pile up at an inch every minute. There would be so many coins hitting the ground per second that it would meld into white noise.[2]The Mark Zuckerberg Money Pump would require over a kilowatt of power just to hoist the coins up to his ceiling and drop them. But that's not a problem. Even a penny is worth enough to pay for the electricity to hoist itself several thousand miles upward. The downward force from the coins falling on Mark's head and shoulders would certainly be annoying, but not debilitating. It would be possible for him to walk around, but if he sat still for an hour, he'd be buried. 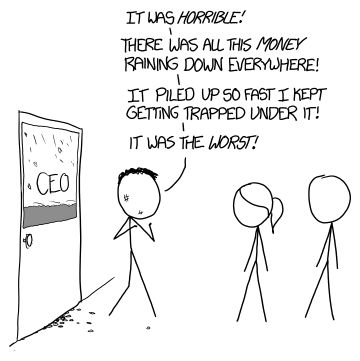 It does sound awful.