Stopping rain from falling on something with an umbrella or a tent is boring. What if you tried to stop rain with a laser that targeted and vaporized each incoming droplet before it could come within ten feet of the ground?

Stopping rain with a laser is one of those ideas that sounds totally reasonable, but if you— 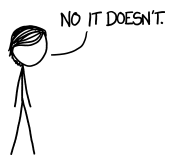 While the idea of a laser umbrella might be appealing, it—

Ok. The idea of stopping rain with a laser is a thing we're currently talking about.

It's not a very practical idea.

First, let's look at the basic energy requirements. Vaporizing a liter of water takes about 2.6 megajoules,[1]It takes more energy if the water is colder, but not much more. Heating the water up to the edge of boiling only takes a little of the 2.6 megajoules. Most of it goes into pushing it over the threshold from 100°C water to 100°C vapor. and a big rainstorm might drop half an inch of rain per hour. This is one of those places where the equation isn't complicated—you just multiply the 2.6 megajoules per liter by the rainfall rate and you get laser umbrella power requirement (watts per square meter protected). It's weird when units work out so straightforwardly: \[2.6\tfrac{\text{megajoules}}{\text{liter}}\times0.5\tfrac{\text{inches}}{\text{hour}}=9200\tfrac{\text{watts}}{\text{square meter}}\] 9 kilowatts per square meter is an order of magnitude more power than is delivered to the surface by sunlight, so your surroundings are going to heat up pretty fast. In effect, you're creating a cloud of steam around yourself, into which you're pumping more and more laser energy.

In other words, you'd be building a human-sized autoclave. Needless to say, autoclaves are not really a popular place to live.

But it gets worse! Vaporizing a droplet of water with a laser is more complicated than it sounds.[2]And to be honest, it sounds pretty complicated. There are many, many, many papers on this subject,[3]Quote from the article Explosion of a Water Droplet by Pulsed Laser Heating by J. C. Carls and J. R. Brock: "... in practice, heating a droplet to very high temperatures before substantial motion occurs ... might be difficult."

Other, out-of-context quotes from that same paper: "The droplet seems to maintain its basic shape and does not appear to be shattering", "The particles formed previously will probably be vaporized.", "By acting strangely, the equation of state is saying that all is not well", "" "Avalanche breakdown", "extremely low and sometimes negative pressures", "the most dynamic response possible", and "Notice the very high temperatures". and the general gist is that it takes a lot of energy—delivered fast—to vaporize the droplet without just splattering it apart into little droplets.

Here's a video of a droplet getting zapped by a laser pulse; you can see that it splatters the droplet, more than vaporizing it. The upshot is that cleanly vaporizing a droplet would probably take more than the already-unreasonable amounts we were considering.

Then there's the problem of targeting. In theory, this is probably solvable. Adaptive optics allow for extremely fast and precise control of beams of light. Covering an area of 100 square meters (which Zach also asked about in his full letter) would require something like 50,000 pulses per second. This is slow enough that you wouldn't run into any direct problems with relativity, but the device would—at minimum—need to be a lot more complicated than just a laser pointer on a swiveling base.

It might seem easier to forget about targeting completely and just fire lasers in random directions.[4] If you aim a laser beam in a random direction, how far will it go before it hits a drop? This is a pretty easy question to answer; it's the same as asking how far you can see in the rain, and the answer is at least several hundred meters. Unless you're trying to protect your whole neighborhood, firing powerful lasers in random directions probably won't help.

And, honestly, if you are trying to protect your whole neighborhood ...