What would happen if all of the rivers in the US were instantly frozen in the middle of the summer?

This is another question that turns out even worse than I expected. 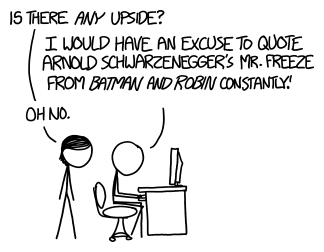 For starters, pretty much every animal in the water would die. This would wipe out several fish species completely (this site lists a number of species found only in the Mississippi and its tributaries) and seriously damage many others.

Then all the ice would start to melt. Melting ice takes a lot of heat energy, but the ice in this scenario would be spread out in thin strands across the country, so it would all melt pretty fast.[1]Strangely, solid ice usually melts faster than snow—not only in terms of weight, but in terms of inches melted per day.[2]

Or[3]Whoa, I can nest footnotes! centimeters. This seems a little counterintuitive, since ice is a lot denser than snow, so it requires a lot more energy to melt a given volume. But snow reflects a lot more light than solid ice, keeping it from absorbing energy, and its air pockets help insulate it.

As ice melts, if it stays in contact with water, the water speeds up the melting, since water can transfer heat more efficiently than air. This can be demonstrated by a simple household experiment. Snow is partly protected from this effect because it can't conduct heat in from the edges as easily. This would cause some localized cooling of the air, but we're talking about a relatively small amount of heat energy compared to the environment's overall energy budget.[4]To estimating the river volume, I found a book that collected estimates of the total world surface water volume in rivers (Chapter 2). It didn't have a breakdown of that number by continent, but it had total discharge rates by continent, so I just used that as a proxy to figure out how to apportion the water between the continents and came up with 16.5% for North America. To get a rough idea, we can apportion that water by surface area (I found a page saying Canada has 9% of the world's freshwater discharge, which seems consistent, although using two numbers from different sources like this creates large potential for error. That leaves 7.5% for the rest of the continent. Dividing up that 7.5% by land area between the US and Central America, the US has about 5%, which works out to 77 km3 of water. 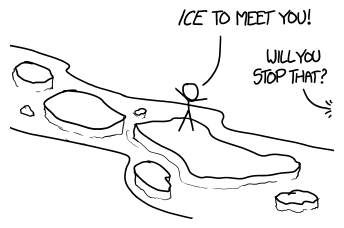 We can use data on iceberg melt rates to estimate how quickly individual rivers would melt. Small streams would melt in days in all but the coldest areas, while ice in larger rivers would take longer.

But before that could happen, things would get weird.

To help me out with this question, I talked to Charlie Hohn, a Vermont field naturalist with an interest in river behavior. I brought Zoe's question to him, and he made a lot of interesting observations.

He pointed out that the water feeding into the rivers—from tiny rivulets and raindrops and melting snow all over the watershed—would suddenly find its path blocked by a wall of ice. 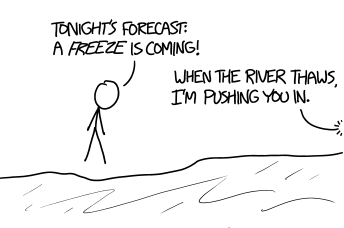 But all that water still has to go somewhere. And if the riverbed is full, it will go somewhere else.

"Any place with rain or snowmelt would have horrific flooding because the water would have nowhere to go," Charlie told me. "Water would shoot down narrow canyons, and once it hit the floodplain it would probably jump into old river channels where they exist, but in many areas that would mean towns and farms."

The problems would get worse as the ice melted and broke up, starting upstream and progressing down the river. The floating ice would pile up, damming the water and creating huge lakes.

Charlie notes that even a small ice dam can cause terrible flooding. When the Winooski river in Vermont was clogged by an ice dam in 1992, the water spilled over the banks and flooded Montpelier in a matter of minutes. And that's just a tiny river, he says. "The Winooski here is narrow enough to throw a rock across, and usually only a few feet deep. In a dry year you could wade across in summer in shorts without getting them wet. So scale that up to the Mississippi and 12-foot-thick ice."

As part of its normal meandering, the Mississippi has been trying for 150 years to jump its banks and flow down the Atchafalaya river's route. The Atchafalaya offers a steeper path to the Gulf of Mexico, but if it captured the Mississippi's flow, it would leave the major ports of New Orleans and Baton Rouge high and dry. The Army Corps of Engineers has been trying to stop it. 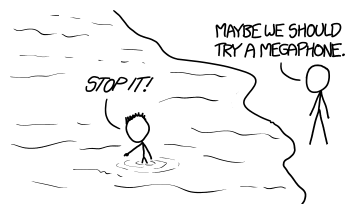 Charlie says that if the Mississippi froze solid, "you'd have the Atchafalaya disaster, without a doubt." And the problems wouldn't be limited to the Mississippi. "The California delta system would also flood, causing a collapse of most of California's water system—though if the aqueducts and reservoirs froze, it wouldn't matter that you couldn't get water from the delta."

If man-made reservoirs do freeze in this scenario (which I guess depends whether they count as "rivers") the ice could damage the dams by expanding in the turbines. Whether or not the reservoir froze,[5]We spent a while debating whether, if Lake Meade froze (and expanded), the Hoover Dam would burst due to the expansion. My gut feeling is that it wouldn't, but I'm really not sure. I think we should just try it. the dams could collapse, causing cataclysmic flooding. And where there aren't dams to collapse, the ice would create them ... and when ice dams break up, the result can be pretty spectacular.

According to Charlie, the vegetation around the rivers would handle the sudden freeze pretty well, but the effect on the broader ecosystem would be huge and complex. "If there were salmon in the rivers, the bears would feast on them when they thawed. But later, if the fishery crashed, there would be a bunch of desperate hungry bears unleashed on the environment."

He mentions that salmon spend part of their life cycle in the ocean, so some of them would survive the rivers freezing. "But if their food were gone, the fishery would still fail. Then again, with all the dams destroyed, maybe it would be a net benefit for salmon ... which is kind of sad."

Although agriculture would take a serious hit, humans would probably make it through ok. We wouldn't run out of drinking water; we get a lot of it from underground aquifers, and there would be plenty of quickly-melting ice lying around in most areas. In the worst case scenario, people could just use hair dryers to melt ice to make drinking water for only pennies per person per day. We'd probably limp through the scenario tattered but alive, buying food overseas.

At least, most of us would.

I think the most horrifying part of this summer freeze wouldn't be the large-scale, long-term devastation. It would be the immediate consequences.

As a kid, I spent summers swimming in the James River in Virginia. Now, thanks to Zoe, every time I set foot in a river ... 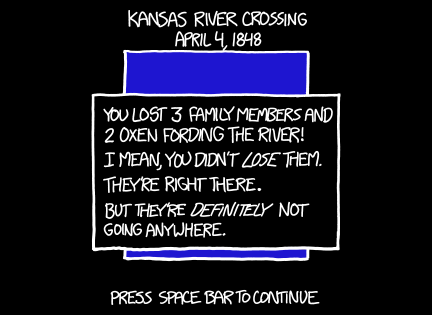