What if I made a lava lamp out of real lava? What could I use as a clear medium? How close could I stand to watch it?

This is a surprisingly reasonable idea, by What If standards.

I mean, it's not that reasonable. At the very least, I'm guessing you would lose your teaching license, and possibly some of the students in the front row. But you could do it. 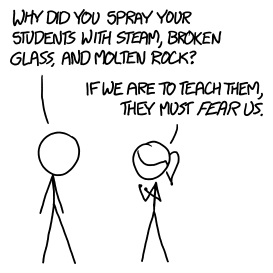 Just a warning: I'm going to be linking to a lot of videos of lava flowing and people poking it with sticks, so you may have a hard time getting to the end of the article without getting sidetracked into watching a bunch of them like I did while writing it.

You have a few choices for transparent materials that could hold the lava without rupturing and splattering half the classroom with red-hot droplets. Fused quartz glass would be a great choice. It's the same stuff they use in high-intensity lamp bulbs, the surface of which can easily get up to mid-range lava temperatures.[1]This bulb, for example, can supposedly handle bulb temperatures of up to 1000°C, which is hotter than many types of lava. Another possibility is sapphire, which stays solid up to 2,000°C, and is commonly used as a window into high-temperature chambers.[2]That link wasn't a lava video, but this is. 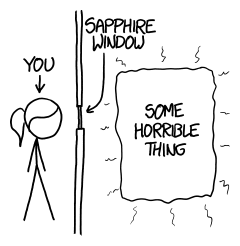 The question of what to use for the clear medium is trickier. Let's say we find a transparent glass that melts[3]Some people say glass is a liquid that flows very slowly. Other people smugly point out that this is actually wrong. Then another group of people dissects how we know it's wrong, and where this incorrect idea got started. And then at the end of the chain, a Metafilter user steps back and asks some supremely insightful questions about what's really going on here as we variously repeat and debunk these kinds of factoids. at low temperatures. Even if we ignore the impurities from the hot lava that would probably cloud the glass, we're going to have a problem.[4]And later, when the school board finds out, we'll have another.

Molten glass is transparent. So why doesn't it look transparent?[5]Which sounds sorta contradictory. "This music is loud, but it doesn't sound loud." The answer is simple: It glows. Hot objects give off blackbody radiation; molten glass glows just like molten lava does, and for the same reason.

So the problem with a lava lamp is that both halves of it will be equally bright, and it will be hard to see the lava. We could try having nothing in the top half of the lamp—after all, when it's hot enough, lava bubbles pretty well on its own. Unfortunately, the lamp itself would also be in contact with the lava. Sapphire might not melt easily, but it will glow, making it hard to see whatever the lava was doing inside.

Unless you hooked it up to a really bright bulb, this lava lamp would cool down quickly. Just like individual blobs of lava, the lamp would solidify and stop glowing within the first minute, and by the end of the class period you'd probably be able to touch it without being burned.

A solidified lava lamp is just about the most boring thing in the world. But the scenario made me wonder: If making a lamp out of molten lava wouldn't be very exciting, then what about a volcano made of lamps? 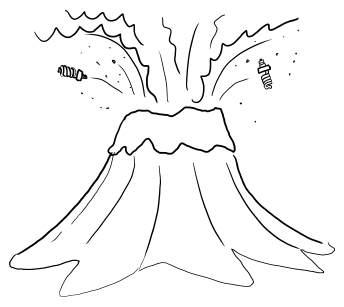 This is probably the most useless calculation I've ever done,[6]Ok, there's no way that's true. but ... what if Mount Saint Helens erupted again today, but instead of tephra,[7]The technical term for "whatever crap comes out of a volcano." it spewed compact fluorescent bulbs?

Well, if it did, the mercury released into the atmosphere would be several orders of magnitude larger than all manmade emissions combined.[8]45% of which come from gold mining. 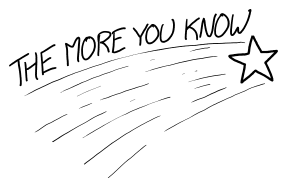 All in all, I think making a lava lamp out of lava would be kind of anticlimactic, and would much rather go find some actual lava and poke it with a stick. I also think that it's probably good that Mount Saint Helens didn't erupt compact fluorescent bulbs. And I think that if I were in Ms. Johnstone's class, I'd try to sit toward the back of the room.

Lastly, for old time's sake, I'd like to share one final link with you: The music video for Rick Astley's "Never Gonna Give You Up."