How many fairies would fly around, if each fairy is born from the first laugh of a child and fairies were immortal?

Interestingly, fairies in the Peter Pan mythology definitely don't live forever. At the end of the book, Peter comes to visit Wendy a year after their adventures. Wendy asks about Tinker Bell, and Peter says he can't remember her and assumes she's died, and Wendy observes that fairies don't live very long.[1]When she expressed a doubtful hope that Tinker Bell would be glad to see her he said, "Who is Tinker Bell?"

"O Peter," she said, shocked; but even when she explained he could not remember.

I expect he was right, for fairies don't live long, but they are so little that a short time seems a good while to them. This suggests that at any given time, there are probably be far fewer fairies than humans in the Peter Pan universe, since they have the same birth rate and shorter lifespans. 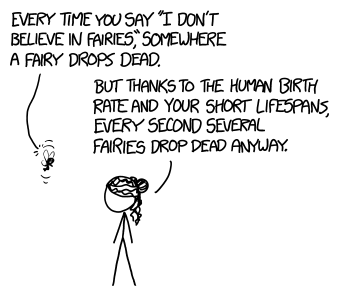 A fairy is created by every[2]Approximately, anyway, but we'll round up by assuming that all babies laugh. newborn baby. The total number of humans who have ever lived is somewhere around 100-120 billion,[3]There are various groups who have estimated this, and they all tend to come up with a number around in this range. If you take a set of estimates for ancient human population (Wikipedia has a table of them) and assume a birth rate near the biological maximum before the 20th century (35 to 45 births per 1,000, according to this paper), you can derive a similar number yourself. meaning 100-120 billion fairies have been created.

How much do all those fairies weigh? Tinker Bell, the main fairy from the Peter Pan universe, seems to be a little under six inches tall. In a scene in Hook, Tinker Bell (played by the 5 foot 9 inch Julia Roberts) fits comfortably in a 1/12 scale dollhouse, suggesting a height of 5.75 inches. As another data point, the statue of Tinker Bell at Madam Tussaud's wax museum is 5.5 inches. This suggests that fairies in Peter Pan are pretty close to 1/12th scale.

If fairies are 1/12th the size of humans, then they weigh \( \left( \tfrac{1}{12\text{th}}\right) ^3=\tfrac{1}{1728\text{th}} \) as much as us, which means Julia Roberts's Tinker Bell is probably around 35 grams.[4](two mice) As of 2015, total fairy biomass would be about 4 million tons. That's less than humans or horses, and probably comparable to the total mass of all humpback whales.[5]Fairies also probably outweigh wild birds.

At these numbers, fairies would be a minor piece of the ecosystem, although possibly a pretty annoying one. 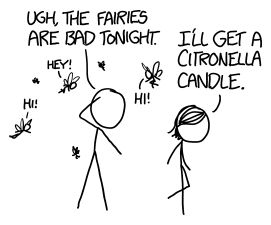 But it wasn't always the case. In the early days of our species, our high birth rates (and death rates) plus our low population mean that we would have accumulated fairies quickly. The exact numbers depend on when the modern human (fairy-generating) species developed, but by the time the last ice age was over, the accumulated fairies could have outweighed our tiny living human population 10 to 1. 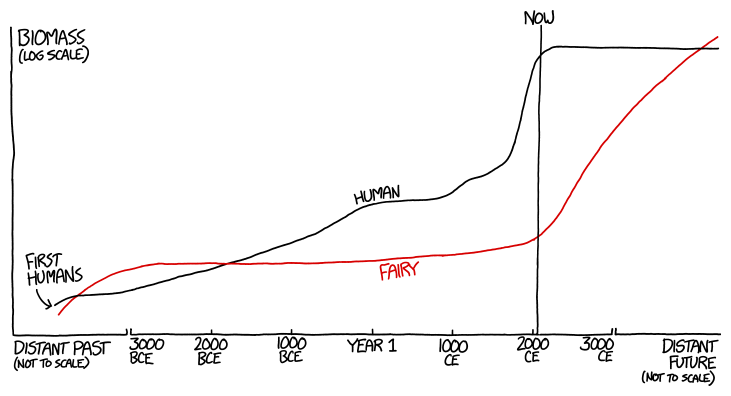 Once our population started growing following the agricultural revolution, we would have quickly outstripped fairies in terms of weight. In 2015, fairy biomass would be down to about 1.2% of human biomass, and by the mid-21st-century, they'd bottom out at less than 1%.

But as long as humans keep reproducing, the fairy population would keep growing. If we assume the human population will level off at around 9 billion partway through this century, then the share of mass occupied by fairies would continue rising steadily.

But if fairies crowd out humans, that would in turn reduce the growth rate of the fairies, slowing down the replacement process. The end result (in this idealized model) would be that the fairy population growth would taper off as the human population declined. The situation would never quite reach a stable equilibrium, because every 1,728 human births would create one human's weight in fairies, reducing the Earth's total human carrying capacity by 1. But since the rate of fairy creation would slow down as the human population shrank, the process would stretch out for a very long time.

This odd situation would only exist because fairies—in Mira's scenario—are immortal. The scenario would change dramatically if we introduced a fairy death rate. Perhaps fairies don't age or experience natural deaths, but can still die from other causes.

Eventually, civilization would start documenting the existence of fairies, and then no one would have any reason to disbelieve their existence, and the feedback loop would break down. But ecosystems aren't static. If you mess with one part, the other parts change in response. Fairies could become the dominant species, but the system they learned to dominate wouldn't be there forever.

If fairies represent most of the biomass in the ecosystem, eventually, given enough time ... 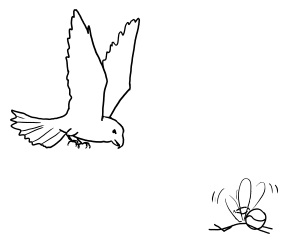 ... something will learn to eat them.