You are in a boat directly over the Mariana Trench. If you drop a 7kg bowling ball over the side, how long would it take to hit the bottom?

It is a good thing you mentioned the weight, because of a very surprising fact:

It's true. Bowling balls all have about the same volume, so they all displace the same weight in seawater—12.13 lbs, or about 5.5 kg. But their weights vary substantially, from as little as 6 lbs to a max of 16. Only the balls that weigh more than 12.13 lbs will sink.

"Hang on a moment," the serious bowlers reading this are saying, "most bowling balls are at the heavy end of that range. The usual range is more like 14-16 lbs for men and 10-14 lbs for women. Maybe the average women's ball floats, but the overall average ball surely sinks."

This is definitely true for serious bowlers, but for casual bowlers, it might be better to define the "average" ball using the distribution on the rack of balls at the local bowling alley. These house balls often list the weight on them, so rather than go to a bowling alley, I just sifted through all the Flickr photos of bowling balls and tallied up all the visible weights. The average was 10½ lbs. 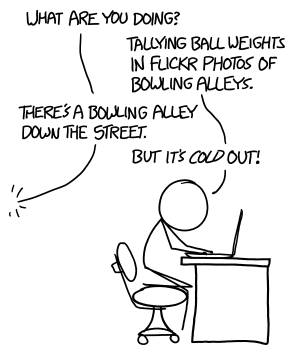 So at the very least, for most people, the average bowling ball they've picked up in their lives probably floats. If nothing else, this makes the popular simile "sank like a bowling ball"—which appears in a number of books—seem a little poorly chosen.[1]In defense of the authors of Volume 53 of North Dakota Quarterly, the simile they used is, "sank like a bowling ball in whipped cream," which is perfectly reasonable. On the other hand, How To Hook a Man (And a Baby) and The Year's Work in Lebowski Studies are on their own.

But Doug's bowling ball is 7 kg (15.5 lbs), making it plenty heavy enough to sink in the ocean. How fast will it fall?

Small falling spheres in viscous (goopy) liquids (like hair gel) exhibit weird behaviors and sometimes complex oscillation, but bowling balls falling through water are pretty straightforward. Their falling speed is determined by the drag equation and their weight (accounting for buoyancy). For Doug's bowling ball, that terminal velocity will be roughly 1.3 meters per second, which means it will take two hours and 20 minutes to reach the bottom. That's plenty of time to enjoy a two-hour movie.

But what if you got the weight wrong? What if the bowling ball you were using turned out to be 7 pounds, not 7 kilograms? Or maybe it's 10.5 pounds—the "average" bowling ball, at least according to a dubious Flickr sample.

In that case, the ball would never reach the bottom. Instead, it would drift sideways with the currents. We can track what course it would take using the Adrift.org.au ocean plastic tracking tool. The bowling ball would first drift west, past Luzon in the Philippines, then probably north along the coast of China, turning right at Japan and heading out over the Pacific.

Sometime in the summer of 2018, it would approach the coast of California. Most likely, it would follow the coast for a little while, then become swept up in the great Pacific garbage patch.

However, it's possible that it would be swept up on shore instead. If, during those three years, Doug took his boat from the Mariana islands to Los Angeles, found a nice, sheltered cove, and set up ten carefully weighted bowling pins just below the surface, then there is a tiny, tiny chance ... 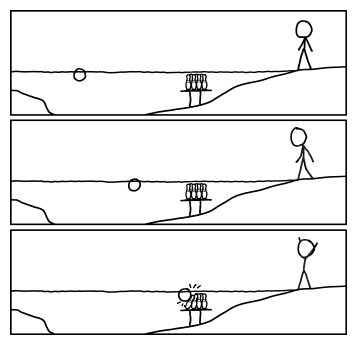 ... that he could succeed in bowling the single most improbable strike of all time.