If you made an elevator that would go to space (like the one you mentioned in the billion-story building) and built a staircase up (assuming regulated air pressure) about how long would it take to climb to the top?

A week or two, if you're a champion stair-climber. Or 12 hours if you're on a motorcycle. 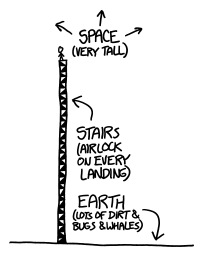 A stairway to space[1]If there's a bustle in your hedgerow, well, uh, boy, I don't know what to tell you. I guess ask it to leave? would have about half a million steps. World-champion stair-climbers[2]or "towerrunners" like Christian Riedl or Kristin Frey can travel roughly a Mount Everest's height in a day; Riedl set the half-day record last October by climbing 13,145.65 meters in 12 hours. At that pace—taking the other twelve hours to rest, eat, and sleep each day—it would take him a little over a week to reach the top.

Climbing all those stairs would burn calories, which would mean you'd need to carry food. It turns out that the most efficient food you can carry, in terms of calories per pound, is butter—which is why Arctic explorers carry so much of it.

Suppose your backpack holds 9 liters. Climbing 10 stairs burns about a calorie, which means climbing all the way up to space will burn about 72,000 calories. If you fill your backpack with butter, it would hold almost enough calories to get you to the top.

However, since it would take you weeks to climb all those stairs, you'd also need your normal dietary allowance of 2,000 calories (three sticks of butter) per day. Combining that with the 72,000 calories just from climbing the stairs, and you'd probably need to upgrade to a more serious 16-liter backpack. If you fill that backpack with butter, it will let you carry around 110,000 calories,[3]Coincidentally, about the amount you get from eating a human body. which should be enough to get you to the top if you're really dedicated.

If you didn't want to eat 35 pounds of butter,[4]For whatever weird reason. you could try getting to the top by motorcycle. Based on how quickly this rider ascends 45 stairs, a motorcycle could conceivably make it to the top in a day. 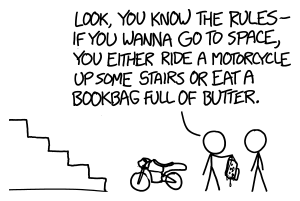 Ok, so you got to the top. Now what? Getting up to space isn't that hard, after all—the hard part is getting into orbit, and the tower doesn't help you very much with that.

So what else could you do?

Michael Longuet-Higgins was a research professor at the University of Cambridge and an expert in fluid dynamics, bubbles, and unusual types of waves.[5]Given his apparent research interests, this video would blow his mind.​[6]Or this one, or this gadget, or this. In 1953, Dr. Longuet-Higgins was shown, by a colleague, an "interesting toy" which had recently appeared on the market. This toy, "Slinky," had some unusual properties. The professor immediately set to work analyzing it, and wrote up his results in a paper.

Dr. Longuet-Higgins first determined through mathematical modeling that the rate at which the Slinky descends steps should depend only on the properties of the spring itself, and not the size or shape of the stairs. He and his colleague conducted a series of experiments "on five different flights of stairs, of various dimensions, in Trinity College, Cambridge." Their conclusion: The Slinky descended a constant rate of about 0.8 seconds per step.[7]Except on some wide, flat stairs, where the Slinky "came to rest after three or four steps at most," which gives me a wonderful mental image of two disappointed British professors at the bottom of a staircase.​[8]Sadly, this was before the invention of the StairMaster. Fun fact: After a surprise StairMaster management shakeup in 2011, for some reason not a single newspaper ran the headline "StairMaster CEO steps down".

Dr. Longuet-Higgins determined that the Slinky quickly reached a constant descent rate after first few steps. This tells us that if you placed a Slinky (similar to his) at top of the stairway to space, and gave it just the right nudge ... 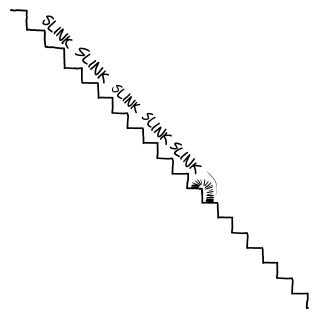 ... it would make it back to the bottom in just over five days.

Or, to put that in more appetizing units: