Would it be possible for two teams in a tug-o-war to overcome the ultimate tensile strength of an iron rod and pull it apart? How big would the teams have to be?

Tug-of-war, a simple game in which two teams try to pull a rope in opposite directions, has a surprisingly bloody history.

I don't mean that there's some kind of gruesome historical forerunner of modern tug-of-war.[1]Although it's definitely an ancient sport, so I'm sure people have come up with all kinds of horrific variations over the centuries that I don't really want to spend hours reading about. Humans seem to be creative when it comes to that kind of thing. I mean that modern tug-of-war involves a lot more death and mutilation than you might expect—precisely because people underestimate how few people it takes to break "strong" things like heavy rope.

As detailed in a riveting article in Priceonomics, recent games of tug-of-war have resulted in hundreds of serious injuries and numerous deaths—all caused, one way or another, by ropes snapping. In particular, this seems to happen when large groups of students try to set a world record for largest tug-of-war game. When a rope under many tons of tension suddenly snaps, the recoiling ends can—and do—cause a terrifying variety of injuries. 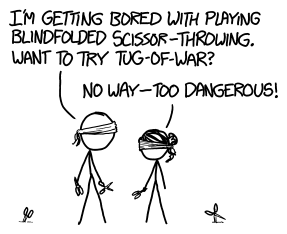 Before we answer Markus's question, it's worth noting that the physics of tug-of-war can be a little tricky. It seems like common sense that the "stronger" team has an advantage, but that's not quite right. To win, you need to resist sliding forward better than the other team. If you can't resist sliding, then increasing your arm strength means you'll just pull yourself forward. Since sliding friction is often proportional to weight, tug-of-war on many surfaces is simply a contest over who's heavier.[2]Champion tug-of-war teams focus on body angle, footwork, digging into the ground, and timing pulls to throw off the other team. The strongest team in the world would lose a tug-of-war with a six-year-old and a sack of bricks, as long as the sack had a firm grip. 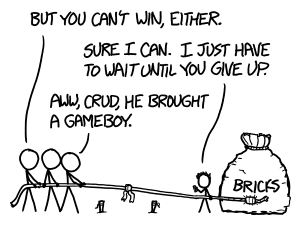 So, how much force can tug-of-war players exert?

A 2011 paper analyzing the immune systems of several "elite tug-of-war players"[3]The paper notes that "Few studies have been done to examine the effects of [the] tug-of-war sport on physiological responses," which seems likely enough to me. measured their average pull force (on a school gym floor) to be about 102.5 kilograms-force, or about 1.5x their body weight.

The ultimate tensile strength of cast iron is about 200 megapascals (MPa), so we can use a simple formula to figure out how many players would be needed to break one.

Two teams of 25 people[4]I originally wrote 25 people total, forgetting that two people pulling with 100 units of force each will produce 100 units of tension on the rope, not 200! Thank you for Gordon McDonough for pointing this out. could probably pull a half-inch iron bar apart. An inch-thick iron bar could be torn in half by teams of 101 people,[5]People often play tug-of-war with their dogs. Going by weight alone, 30 humans would probably be about evenly matched against 101 dalmatians. and a 2-inch-diameter bar would need over 400. It's hard to have a tug-of-war with something thicker than about 2 inches. Since you're not allowed to install handles on the rope,[6]Or wrap it around your hand, for reasons which will become clear if you read some of the articles on tug-of-war injuries. it has to be narrow enough to grip easily.

While "400 people" may be the limit for plain iron bars, there are much stronger substances out there. Common types of steel, for example, have a tensile strength about 10 times that of cast iron. Common half-inch rebar, for example, would in theory take teams of over 200 people to pull apart, compared to 25 for cast iron. Other substances are even stronger; a half-inch shaft made from high-grade steel or a polymer like Kevlar (or, theoretically, a solid silicon crystal) could handle the pulling force from teams of anywhere between 500 and 800 competitive tug-of-war players.

If we limit ourselves to a two-inch diameter rope, which seems to be about the maximum size for tug-of-wars,[7](William Safire returns from the grave to point out that it should really be tugs-of-war.) then the maximum number of tug-of-war players given a super-strong rope like Kevlar is in the neighborhood of 10,000.[8]Or several times that many, if they're not very athletic.

If we figured out how to manufacture large ropes out of graphene ribbons, which have tensile strengths over 10 times higher than existing materials, we could theoretically support a tug-of-war between teams of up to 100,000 players each. Such a rope would be over 200 miles long, and could stretch from New York to Washington. 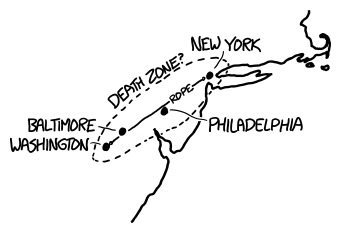 If our experience with nylon ropes failing is any indication, when the graphene finally snapped, the death toll could be enormous among both players and bystanders. Lengths of graphene would crack across the landscape like bullwhips, slicing down forests and demolishing buildings.

In the end, trying to develop stronger ropes leads only to greater danger to everyone, both participants and bystanders. In the ultimate game of tug-of-war ...

... the only winning move is not to pull.