What in my pocket actually contains more energy, my Zippo or my smartphone? What would be the best way of getting the energy from one to the other? And since I am already feeling like Bilbo in this one, is there anything else in my pocket that would have unexpected amounts of stored energy?

The Zippo lighter easily beats the phone, even though its fuel tank is barely half the size of a large phone's battery, because hydrocarbons are fantastic at storing energy. Gasoline, butane, alcohol, and fat contain a lot of chemical energy, which is why our bodies run on them.[1]I mean, the latter two, at least. You can't eat gasoline.​[2]As far as I know.​[3]Although technically swallowing gasoline may not kill you, according to Utah Poison Control specialist Brad Dahl. However, he cautions that you will find yourself "burping gasoline," which is "not real tasty." (Actual quote.)​[4]Also, if you don't rinse your throat afterward, it will give you chemical burns.

How much energy do they contain? Well, let's put it this way: A fully-charged car battery holds barely as much energy as a sandwich.

A container of butane the size of a phone battery could, in principle, power the phone about 13 times longer than the battery itself could.[5]In the case of my phone, that could give me as much as three hours. The obvious question, then, is "why doesn't my phone run on propane?" 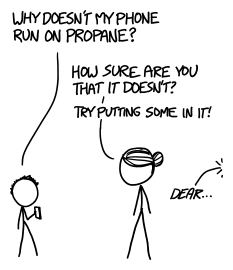 The obvious answer is "because your phone would catch fire," but that's not quite it. See, lithium-ion batteries are also extremely flammable, and a huge amount of effort has gone into making Michael Bay scenarios less common.

The truth is more complicated. People have wanted to build various kinds of "fuel cell" batteries for almost as long as we've had portable electronics. The allure of hydrocarbon energy storage continues to this day—if you do a Google search for fuel cell phone charger, you'll find news stories about new products announced every year. Many of them are no longer available.

If you really want to power your phone with butane, the current hot project—as far as I can tell from a cursory search—seems to be the kraftwerk portable USB generator, which has made over a million dollars on Kickstarter with several weeks left in its campaign. Of course, a portable battery of the same size could do a lot of the same things, but there are certainly some use cases where the butane charger offers advantages. If you place a premium on reducing weight, or have to go a long time without contact with the power grid, it could be a good option. Let's put it this way: If the phrase "power your phone on butane", makes you think, "hey, that would solve a problem I have!" then go for it. 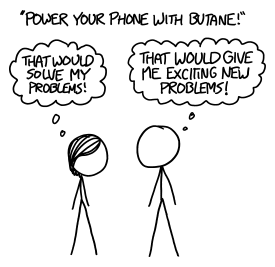 This gives us the answer to Ian's second question. The Zippo lighter has more energy, but getting it into the phone is a little difficult and requires the overhead of a fuel cell or generator. Getting the phone to start a fire, on the other hand, is quite reasonable, although it may require doing bad things to the battery.

Ian's third question was "what else in my pocket might contain more energy?" Like Gollum, I have no idea what's in your pocket,[6]Or whether you're happy to see me, for that matter. but I can guess that it might contain one thing with more energy than a battery: Your hand.

An adult man's hand weighs about a pound.[7]I wanted to put "citation needed" after that, but to my mild dismay I actually do have a citation. The hand isn't the fattiest part of the body, but if burned completely, it would probably give off about 500 watt-hours of energy, give or take. That's 50 times the energy content of the phone battery, and almost 10 times that of the Zippo. It's also about as much as a car battery.

And, for that matter, about as much as a sandwich. 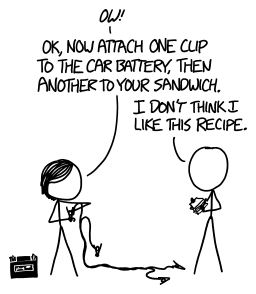