If every person on Earth aimed a laser pointer at the Moon at the same time, would it change color?

Not if we use regular laser pointers.

The first thing to consider is that not everyone can see the Moon at once. We could gather everyone in one spot, but we learned our lesson about that a few weeks ago. Instead, let’s just pick a time when the Moon is visible to as many people as possible. Since about 75% of the world’s population lives between 0°E and 120°E, we should try this while the Moon is somewhere over the Arabian Sea.

We can try to illuminate either a new moon or a full moon. The new moon is darker, making it easier to see our lasers. But the new moon is a trickier target, because it’s mostly visible during the day—washing out the effect.

Brightness aside, an ideal time would probably be 2:00 PM EST on December 27th, 2012, when a full moon will be high in the sky above Mumbai and Islamabad. At that point, the Moon will be visible to approximately five billion people—most of Asia, Europe, and Africa—about as many as can ever see it at one time.

But let’s pick a quarter moon instead, so we can see the effect on the dark side. We’ll avoid the December 21st quarter moon to avoid encouraging any Mayan nonsense, and pick the one on January 4th, 2013, half an hour after midnight (GMT). It’ll be day in East Asia but night in Africa and Europe. 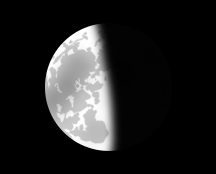 The typical red laser pointer is about 5 milliwatts, and a good one has a tight enough beam to actually hit the Moon—though it’d be spread out over a large fraction of the surface when it got there. The atmosphere would distort the beam a bit, and absorb some of it, but most of the light would make it. 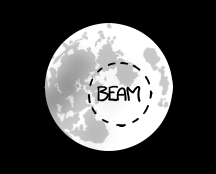 Let’s assume everyone has steady enough aim to hit the Moon, but no more than that, and the light is spread evenly across the surface.

At half an hour after midnight (GMT), everyone aims and presses the button.

This is what happens:

It makes sense, though. Sunlight bathes the Moon in a bit over a kilowatt of energy per square meter. Since the Moon’s cross-sectional area is around 10^13 square meters, it’s bathed in about 10^16 watts of sunlight—ten petawatts, or two megawatts per person—far outshining their five milliwatt laser pointer. There are varying efficiencies in each part of this system, but none of it changes that basic equation.

5 milliwatts is wimpy. We can do better.

A 1-watt laser is an extremely dangerous thing. It’s not just powerful enough to blind you—it’s capable of burning skin and setting things on fire. Obviously, they’re not legal for consumer purchase in the US.

So suppose we spend the $2 trillion to buy one-watt green lasers for everyone. (Memo to presidential candidates: this policy would win my vote.) In addition to being more powerful, green laser light is nearer to the middle of the visible spectrum, so the eye is more sensitive to it and it seems brighter.

The laser pointers we’re using put out about 150 lumens of light (more than most flashlights) in a beam 5 arc-minutes wide. This lights up the surface of the Moon with about half a lux of illumination—compared to about 130,000 lux from the sun. (Even if we aimed them all perfectly, it would only manage half a dozen lux over about 10% of the Moon’s face.)

By comparison, the full moon lights up the Earth’s surface with about one lux of illumination—which means that not only would our lasers be too weak to see from Earth, but if you were standing on the Moon, the laser light on the landscape would be fainter than Moonlight is to us on Earth.

With advances in lithium batteries and LED technology over the last ten years, the high-performance flashlight market has exploded. But it’s clear that flashlights aren’t gonna cut it. So let’s skip past all of that and give everyone a Nightsun.

You may not recognize the name, but chances are you’ve seen one in operation: It’s the searchlight mounted on police and Coast Guard helicopters. With an output on the order of 50,000 lumens, it’s capable of turning a patch ground from night to day.

The beam is several degrees wide, we’ll want some focusing lenses to get it down to the half-degree needed to hit the Moon.

It’s hard to see, but we’re making progress! The beam is providing 20 lux of illumination, outshining the ambient light on the night half by a factor of two! However, it’s quite hard to see, and it certainly hasn’t affected the light half.

Let’s swap out each Nightsun for an IMAX projector array—a 30,000-watt pair of water-cooled lamps with a combined output of over over a million lumens.

At the top of the Luxor Hotel in Las Vegas is the most powerful spotlight on Earth. Let’s give one of them to everyone.

Oh, and let’s add a lens array to each so the entire beam is focused on the Moon:

Our light is definitely visible, so we’ve accomplished our goal! Good job, team.

The Department of Defense has developed megawatt lasers, designed for destroying incoming missiles in mid-flight.

The Boeing YAL-1 was a megawatt-class chemical oxygen iodine laser mounted in a 747. It was an infrared laser, so it wasn’t directly visible, but we can imagine building a visible-light laser with similar power. Let’s give one to everyone.

Finally, we’ve managed to match the brightness of sunlight!

Ok, let’s mount a megawatt laser on every square meter of the surface of Asia. Powering this array of 50 trillion lasers would use up Earth’s oil reserves in approximately two minutes, but for those two minutes, the Moon would look like this:

The Moon shines as brightly as the midmorning sun, and by the end of the two minutes, the lunar regolith is heated to a glow.

Ok, let’s step even more firmly outside the realm of plausibility.

The most powerful laser on Earth is the confinement beam at the National Ignition Facility, a fusion research laboratory. It’s an ultraviolet laser with an output of 500 terawatts. However, it only fires in single pulses lasting a few nanoseconds, so the total energy delivered is about equivalent to a quarter-cup of gasoline.

Let’s imagine we somehow found a way to power and fire it continuously, gave one to everyone, and pointed them all at the Moon. Unfortunately, the laser energy flow would turn the atmosphere to plasma, instantly igniting the Earth’s surface and killing us all.

But let’s assume that the lasers somehow pass through the atmosphere without interacting.

Under those circumstances, it turns out Earth still catches fire. The reflected light from the Moon would be four thousand times brighter than the noonday sun. Moonlight would become bright enough to boil away Earth’s oceans in less than a year.

But forget the Earth—what would happen to the Moon?

The laser itself would exert enough radiation pressure to accelerate the Moon at about one ten millionth of a gee. This acceleration wouldn’t be noticeable in the short term, but over the years, it adds up to enough to push it free from Earth orbit.

… If radiation pressure were the only force involved.

40 megajoules of energy is enough to vaporize a kilogram of rock. Assuming Moon rocks have an average density of about 3 kg/liter, the lasers would pump out enough energy to vaporize four meters of lunar bedrock per second:

However, the actual lunar rock won’t evaporate that fast—for a reason that turns out to be very important.

When a chunk of rock is vaporized, it doesn’t just disappear. The surface layer of the Moon becomes a plasma, but that plasma is still blocking the path of the beam.

Our laser keeps pouring more and more energy into the plasma, and the plasma keeps getting hotter and hotter. The particles bounce off each other, slam into the surface of the Moon, and eventually blast away into space at a terrific speed.

This flow of material effectively turns the entire surface of the Moon into a rocket engine—and a surprisingly efficient one, too. Using lasers to blast off surface material like this is called laser ablation, and it turns out to be a promising method for spacecraft propulsion.

The Moon is massive, but slowly and surely the rock plasma jet begins to push it away from the Earth. (The jet would also scour clean the face of the Earth and destroy the lasers, but we’re pretending for the moment that they’re invulnerable.) The plasma also physically tears away the lunar surface, a complicated interaction that’s tricky to model.

But if we make the wild guess that the particles in the plasma exit at an average speed of 500 kilometers per second, then it will take a few months for the Moon to be pushed out of range of our laser. It will keep most of its mass, but escape Earth’s gravity and enter a lopsided orbit around the sun.

Technically, the Moon won’t become a new planet, under the IAU definition of a planet. Since its new orbit crosses Earth’s, it will be considered a dwarf planet like Pluto. This Earth-crossing orbit will lead to periodic unpredictable orbital perturbation.  Eventually it will either be slingshotted into the Sun, ejected toward the outer Solar System, or slammed into one of the planets—quite possibly ours. I think we can all agree that in this case, we’d deserve it.

And that, at last, is enough power.