I've long thought about putting a flamethrower on the front of a car to melt snow and ice before you drive across it. Now I've realized that a flamethrower is impractical, but what about a high-powered microwave emitter?

Believe it or not, your flamethrower idea is actually the more practical of the two. The flamethrower also has the advantage that, unlike the microwave, it won't interfere with wifi (unless you aim it directly at the router).

I'm writing this article from Boston, which is currently buried under a truly ridiculous amount of snow. We've had more snow in the past 30 days than Anchorage, Alaska usually gets in an entire winter.[1]Meanwhile, Anchorage is on Twitter wondering where their snow went and threatening revenge. Here's a neat visualization of the atmospheric pattern during these polar vortexes. Vortices. Whatever. Our transit system has broken down and our roofs[2]Tolkien prefers rooves. are collapsing. The mayor gave a press conference in which he announced, "I don't know what to say to anybody anymore. Hopefully it will stop eventually."

So snow removal is on all our minds.

But snow is hard to melt. (And we've been trying[3]I love that tweet because it sort of sounds like it comes from an alternate fairy-tale universe where cities farm snow and snow-melters form the base of the economy.) Your microwave idea certainly sounds like it should be more practical than a flamethrower. Microwaves seem clean and efficient; after all, we don't use flamethrowers in our kitchens. 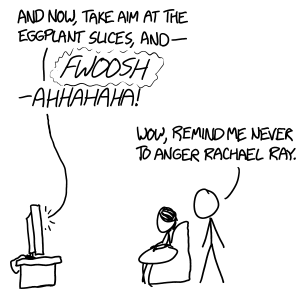 Fortunately, there are other ways to get energy into the ice. In addition to your flamethrower suggestion, you could, for example, use infrared heat lamps or lasers.[4]Pick a frequency where snow has a low albedo; otherwise, the FBI may hunt you down for lasering aircraft. But whatever you use, you'll run into another problem: It takes an awful lot of energy to melt snow.

Melting a gram of snow takes about 335 joules of energy. To put that another way, a 60-watt lightbulb is capable of melting about a pound of snow an hour.

A foot of snow contains roughly the same amount of water as an inch of rain, give or take. Let's assume you've had a decent snowstorm of about a foot[5]For the record, by this standard, Boston has had a "decent snowstorm" every few days for the past month.—meaning an inch worth of water—and that you want to melt a 9-foot-wide swath while driving along at 55 mph.

Luckily, this happens to be one of those happy physics situations where we can just multiply together every number we're looking at, and the answer turns out to be the measurement we want:

Unfortunately, it's not the answer we'd like. The nuclear reactor on an aircraft carrier, for example, produces less than 200 megawatts. To melt snow in front of your car, you'd need three of those.

What about your your original flamethrower idea?

Gasoline may have a phenomenally high energy density, but it's not high enough. No matter how big the tank on your flamethrower was, you'd run out of fuel constantly.

Gas mileage in the US is often measured in "miles per gallon" of gasoline. With your flamethrower guzzling fuel, your mileage would be about 17 feet per gallon.

You might be better off dropping the flamethrower entirely. Instead, take a cue from the rail agencies, who use jet-engine-powered snowblowers to clear train tracks.

In the end, it's easier to just move the snow out of your way. 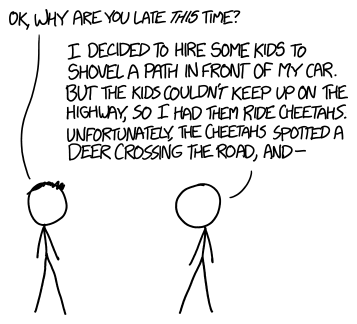