I have had a particular problem for as long as I can remember. Any time I attempt to heat left over Chinese food in a microwave, it fails to heat completely through somewhere. Usually the center but not always and usually rice, but often it will be a small section of meat. It's baffling and has made me automatically adjust heating times to over 2 minutes. In most cases this tends to heat the bowl or plate more than the food. So I suppose the question is what is the optimal time to heat left over Chinese food in the microwave, how about an 800 watt microwave?

This is a great question. Since the answer isn't too hard to find by Googling, normally I would skip it, but the answer is also something that I never really learned while growing up, so I'd like to try to answer it, for the sake of anyone else out there like me who spent years confused by microwaves.

First, the disclaimer: I am not an expert on food preparation or food safety. Actual experts on food safety can be found at US Department of Agriculture, which publishes a good FAQ page on microwave oven safety.

Now, on to James's question.

There are a couple of different effects that cause microwaves to heat food unevenly. 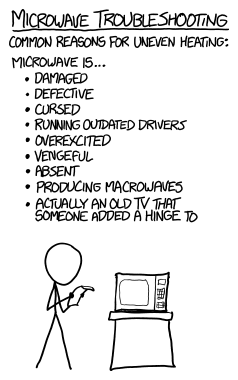 The first one is that microwaves have hot and cold spots. You can see this by filling a microwave with damp thermal paper, marshmallows, chocolate, or—possibly best of all—appalams.

The reason microwaves don't cook evenly comes straight from physics. When you continuously feed waves into a space—which is what microwaves do—you'll often have some "dead" spots: 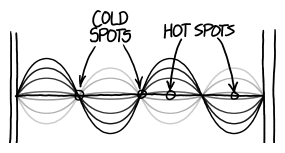 In two dimensions, you get a similar but more complicated pattern.

These dead spots are the reason microwaves are designed with rotating platters—the idea is that each part of the food will pass through at least one hot spot. Microwave designers use a lot of tricks to try to vary the pattern to minimize dead spots, but no one does it perfectly; all microwaves will heat at least a little bit unevenly.

The second major reason for cold spots in microwaved food is something touched on in last week's article: Microwaves aren't absorbed very well by ice.

At first, this doesn't seem like a problem, right? It just means that if your food is partly or entirely frozen, you just need to microwave it longer. But when you do that, something interesting happens.

When ice melts, it turns to water,[citation needed] which does absorb microwaves very well. When the first pockets of ice turn to water, they start absorbing more microwaves and heating very quickly, even though the ice around them hasn't even melted. Those melted parts can easily heat enough to start cooking the food while other parts are still frozen.

This means that if you defrost frozen meat in your microwave, it could be hot to the touch over most of its surface, but still have a solid chunk of ice in it somewhere. If it does, when you plop it on the stove,[1]Or in a pan on the stove, or whatever. the thawed parts might finish cooking before the frozen parts have even started to warm up, giving you a large chunk of raw meat in the middle of your steak.

This starts to explain some of the weird instructions commonly seen on microwavable food.

When instructions say let stand for 1-2 minutes, it's not just to protect your mouth from hot food—it's giving the hot and cold spots time to equalize, so the whole thing will be sufficiently heated throughout. And if some part of the food doesn't conduct heat well (e.g. rice) or contains a lot of chunks of ice (e.g. frozen fruit or meat) they also might tell you to stir midway through cooking. This helps to transfer the heat more evenly into the food, move food away from cold spots, and also break up chunks of ice and mix them with warmer pockets of water to help melt them.

This helps us explain why James is so perplexed. He's adjusting the obvious variable—total cooking time—and no matter what value he chooses, he's getting bad results. 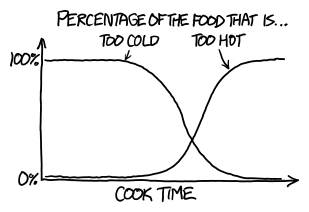 The solution is to mess with other variables. First, he can redistribute the heat by pausing halfway through microwaving to stir the food. Second, for things that are harder to stir, he can give the heat time to equalize on its own. If he microwaves his food for a short period, waits a moment, then zaps it again, the heat will have time to spread from the hot spots to the cold spots in between zaps, resulting in more evenly-heated food.

And that brings us to one last surprising[2]This was surprising to me, anyway; I used microwaves for almost 20 years before I realized it. aspect of microwaves: Power level. 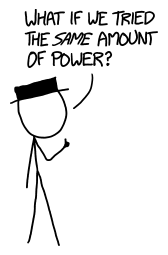 It turns out that "turning the microwave off every so often to let the food cool" is exactly what the "power level" setting does! Choosing a lower power level doesn't actually change the strength of the microwaves; it just means that the microwave generator won't be running the whole time. When you cook something on 50% power, you may notice the microwave's sound changing every so often; that's the dynamo turning on and off.[3]The length of these on/off periods (duty cycle) is surprisingly long, partly because switching off and on is hard on the magnetron. This is also the reason why, if you normally cook something for 2 minutes on 50% power, cooking it for 1:30 won't necessarily deliver 75% as much heat like you'd expect. While it's on, the microwave is running at full power. In effect, the microwave is just automating the tedious task of zapping something a bunch of times on "high" for 10 seconds each and letting it sit for a while in between.

So my advice to James is simple: Use a lower power level, stir your food partway through microwaving, and let it sit for a few minutes before you eat it.

And FYI, if you cut a grape in almost in half and microwave it, you'll create bursts of plasma. (You also might damage your microwave, so do it at your own risk.)

This has nothing to do with your question. I just wanted you to know.