I saw a sign at a hot springs tub saying "Caution: Water is hotter than average" with water at about 39°C. Although they were presumably trying to say "hotter than the average swimming pool," this got me wondering: What is the average temperature of all water on the Earth’s surface, and how does that temperature compare to 39°C?

You might be selling the sign-maker short. Whether they explicitly intended it or not, the wording on their sign hints at something kind of profound.

The sign is true in the literal sense, in that 39°C is hotter than most water you'll find on Earth. But it's also true in a deeper sense, one that ties together the concept of heat, springs, and averages.

For the most part, the temperature of groundwater in an area is equal to the year-round average air temperature of the surface. Water is a terrific absorber of energy, requiring huge amounts of it to change temperature.[1]Which is why pots of it take so long to boil. Underground reservoirs of water tend to warm up and cool down too sluggishly to respond to the comparatively brief winter-summer temperature swings.[2]It also takes a while for heat to work its way downward, so sometimes deep parts of water bodies will reach their maximum temperature when it's winter on the surface. Rock works the same way; if you drill a hole deep into the bedrock, you can see historical temperatures stacked vertically, as waves of heat and cold moving downward.

This property makes springs a useful "thermometer" for an area. Instead of spending a year measuring the temperature each day and night, and then calculating the average, you can just stick a thermometer in a spring any time of year.

If you look at a map of groundwater temperatures, you'll see it closely resembles a map of year-round average air temperatures (PDF, see page 6).

However, this rule only holds true in places where the main energy source heating the groundwater is the same one heating the air—sunlight. While this is true in most areas, in a few geologically-active spots, water is warmed far above this baseline by the flow of energy from deep within the Earth. 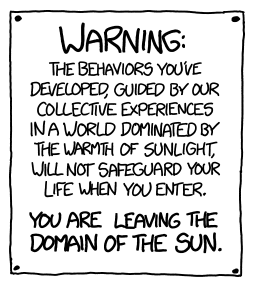 So give the signmakers some credit.