So, you're falling from a height above the tallest building in your town, and you don't have a parachute. But wait! Partway down the side of that skyscraper there's a flagpole sticking out, sans flag! You angle your descent and grab the pole just long enough to swing around so that when you let go you're now heading back up toward the sky. As gravity slows you and brings you to a halt, you reach the top of the skyscraper, where you reach out and pull yourself to safety. What's the likelihood this could happen?

If you're like me, your first thought on hearing this question was, "That's ridiculous; there's no way that could work."

Your first thought is right. But just to be sure, let's take a closer look.

Grip strength depends on a lot of factors, like hand slickness and surface material. But for the moment, let's assume Rex's hands are able to grab the pole tightly. What happens to the rest of his body? 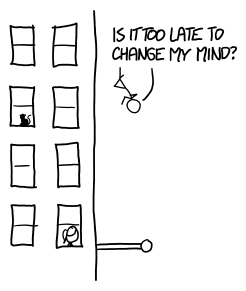 It's hard to find good numbers on how much force it takes to tear off a person's arm.[1]Which is probably a good thing, to be honest. There are threads on the question on MetaFilter and the Straight Dope message boards, and frequent discussion of the death of Robert-François Damiens,[2]Damiens was tortured to death for attempting to assassinate Louis XV, but a team of horses had trouble tearing him limb from limb. but not too much hard data.

For the record, there are lots of studies and lectures on the breaking strength of tendons, which tend to give values of around 50-150 MPa. That's stronger than skin (27 MPa) but weaker than bone (120 MPa). However, to figure out the overall strength of the arm, we need to tally up all the tendons, muscles, and tissues in the wrist, arm, and shoulder, their cross-sectional area, and figure out which parts would be put under strain in what order.

Instead, it might be easier to consider people who try to pull off this maneuver in real life: Gymnasts.

A gymnast on the uneven parallel bars pushes the human body to its limits while performing maneuvers very similar to Rex's flagpole stunt.[3]In some ways, at least. A 2009 study used 3D motion capture to measure the forces involved in an elite gymnast's routine. They found that the athlete's hands exerted a force of over 3 kN on the bar at the bottom of a swing. In other words, the gymnast was briefly supporting almost 700 lbs of weight.

Let's be generous and assume that Rex is even better than the elite gymnast in the study. (After all, the gymnast has to worry about long-term injury, while Rex's concerns are a lot more short-term). Suppose Rex's arms can handle a swing force of over 10 kN, three times more than the gymnast (and twice as much as these guys!). How will he do?

Let's see how much force Rex needs to withstand. The "tallest building in town" here in Boston is the 240-meter-tall Hancock Tower; if he jumped off the top, he'd be going nearly 100 mph by the time he was halfway down. At that speed, the force on his arms (speed squared over the radius of his turn[4]Which is effectively somewhere between 1 and 2 meters here.) would be around ... 100 kN.

Really, the numbers are just telling us what common sense told us from the start: You can't grab hold of something while going 100 mph, much less swing around it.

If you want get a more vivid intuitive sense of the forces involved, consider this: In 2006, GQ put baseball star Albert Pujols in a lab and measured his swing. They clocked the speed of his bat at 87 mph, similar to the speed of the flagpole relative to our falling person.

So if you want to pull off Rex's stunt, first go find Albert Pujols, have him swing his bat as hard as you can ... and try to grab it.

And remember: You're just trying to stop the momentum of a 31-ounce piece of wood. When you're falling past the flagpole, you're going to be catching your whole body, so it's going to be up to 100 times worse. 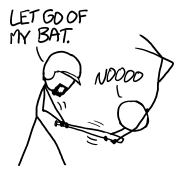