I've often joked I'd like to have my remains put into orbit. Not in a "scatter my ashes" sense, but, like, "throw my naked corpse out the airlock" sense. Honestly, my main motivation is to baffle someone in the distant future, but it's an interesting scientific question: what would happen to my body in orbit over the course of years, decades or centuries?

This isn't really relevant, but I have to ask: Is there a reason you specifically wanted your corpse to be naked? Just making things extra weird for the technicians loading up the capsule and/or throwing you out of the airlock? 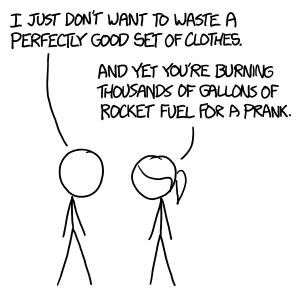 If you tried this, the first thing that would happen to your corpse would be that it would dry out. This would probably start before you made it to space; the dry, climate-controlled air in the pre-launch waiting area would help draw moisture from your body.

In the Manual of Forensic Taphonomy, Franklin Damann and David Carter outline the process of human decomposition. According to them, it takes a lot of effort to keep corpses from drying out during the embalming process.[1]The citation they give for that fact is "(C. A. Wacker, pers. comm.)," which I like to think means it was shared in a conversation that totally broke up the dinner party they were both at. In extremely dry environments like the Atacama Desert in Chile, "spontaneous mummification" can occur—and space is even drier than Chile.[2]The space tourism industry has not adopted this as a slogan. Also, "Chile: Not as Dry as Space!" was probably nixed by the Chilean tourism board.

Once your body made it to space, this process would ramp up quickly. Most of the "ecology" responsible for decomposing your corpse would be killed off quickly by the drying process (along with the lack of oxygen, temperature swings, and solar radiation levels), so your body wouldn't decay very much. Instead, you'd become a freeze-dried mummy, after losing about 80% of your body weight in water.[3]This is how much liquid you can remove from fresh animal tissue, according to lab experiments reported in Arthur C. Aufderheide's book The Scientific Study of Mummies. That makes sense; after all, according to that commonly-repeated piece of trivia, human bodies are around 70% water.

Or is it 65%? Or 80%? The exact number is a little vague, and seems to depend on who you ask. In a footnote in her wonderful book, Stiff: The Curious Lives of Human Cadavers, writer Mary Roach mentioned that she had methodically Googled the phrase "human body is <X> percent water", for X from 0 to 100. She reported a wide range of claims, including several pages asserting that we're 98% water. It's really gratifying to know I'm not the only person who spends a lot of time carefully cataloging weird stuff like that.

What happens next depends on exactly where in space you are.

If you're in an orbit that passes near the Earth, your orbit will quickly decay, and before long you'll re-enter the atmosphere and burn up.

If you're in a slightly higher orbit, you'll last longer, but you'd also be in the zone where space debris was thickest. Impacts with small bits of debris would start to leave pits and scars on your surface; they would often find these on Space Shuttle windows after a flight. Eventually, probably after a few decades, you'd probably have a violent collision with something.

Higher orbits are safer. If you were some distance away from the Earth, near where geosynchronous satellites orbit, there would be less debris to run into. Furthermore, for large, dense objects, orbits out there are stable for a very long time. You could spend centuries drifting among TV broadcast satellites. 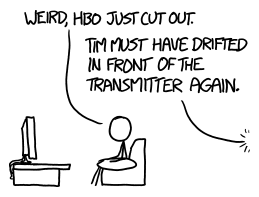 If you wanted to last even longer, you could launch yourself away from Earth completely, finding a quiet and stable orbit somewhere in interplanetary space. There, over the course of millennia, you'd be slowly baked by the Sun's radiation and pitted and powdered by micrometeorites.

But if your goal is to weird out future space travelers, that might not be the best plan. Space is big; if someone randomly stumbles on your corpse, it suggests that there must be a lot of people zipping around the solar system. And if space travel has become that common, there will be lots of corpses floating around;[4]Weird that "lots of corpses floating around" is somehow an optimistic prediction about the future of space travel. discovering yours will be more archaeologically exciting than anything. You'll be stuck in a lab or museum somewhere and contribute to someone's research paper—a bland end to your exciting prank.

Unless, of course, you happen to be found by the only people in space even weirder than you. 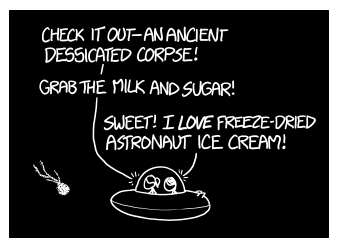