What would happen if I dug straight down, at a speed of 1 foot per second? What would kill me first?

This question is the reverse of question #64, which asked how you'd die if you rose steadily at a foot per second. Digging at the same rate would kill you more quickly. 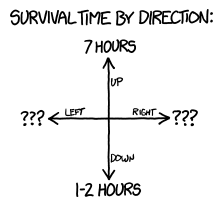 After you get through the surface layers,[1]See question #132 for more on that. temperatures rise pretty steadily as you go deeper, a trend that continues all the way to the core.

In some areas, where the hot magma[2](Lava.) is closer to the surface, the ground gets hotter more quickly.

The Southern Methodist University Geothermal Lab has produced some superb maps showing the temperature of deep rocks in different parts of the United States. If you look at the map of the 3.5 km layer, you see that at that depth, most of the US is colored greenish-yellow, representing temperatures somewhere around 100°C—with one glaring exception. In northwest Wyoming, there's a circle of ground colored bright red, where the rock is much hotter than normal. That circle is the Yellowstone supervolcano. 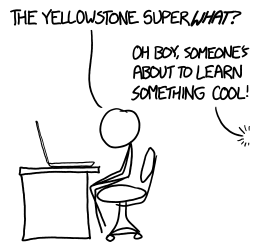 The SMU maps show that even if you avoided digging in Yellowstone, you'd quickly encounter temperatures too hot for an unprotected human. The ground typically gets hotter at an average of about 35°C per kilometer, so at a rate of a foot per second, you'd encounter lethal heat within an hour or two.

But wait a moment.

Let's say your hole is about a meter wide. At the rate you're digging, you have to remove roughly half a ton of material every second.

No human would be capable of lifting that first foot of material out of the hole so quickly, and it only gets worse after that. After a minute of digging, you'd be 60 feet down, and would have to lift all that rock and dirt a huge distance vertically to get it out of the hole. The power required to do that lifting—just after the first minute—would be roughly 150 horsepower. 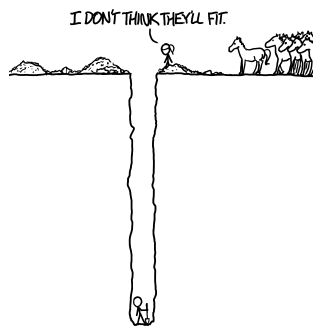 Even if you're not doing the lifting yourself, the way your question is worded makes it pretty clear that you are in this hole. Whatever process you're using is going to require huge amounts of energy to lift all that rock, and that energy is inevitably going to result in the hole being heated somehow. Even if the layer you're digging through wasn't hot when you started, it will be.

What if we assume you're protected against the heat from the ground (and the digging mechanism)? Well, in that case, the pressure would become a problem. As you go deeper, air pressure increases. Below about 5 km, the pressure is high enough that oxygen becomes toxic.

So what if you're protected against the heat, pressure, and the digging process?

Well, at that point, we've redefined the rules so much that I'm not sure it makes sense to try to calculate an answer. The question—"what would kill you if you kept digging downward"—has left the realm of physics and become fantasy.

Which, come to think of it, makes the answer perfectly clear. 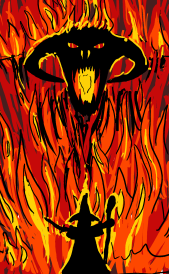