Spiders vs. the Sun

Which has a greater gravitational pull on me: the Sun, or spiders? Granted, the Sun is much bigger, but it is also much further away, and as I learned in high school physics, the gravitational force is proportional to the square of the distance.

Note: This is a spider-heavy article. I can be a little anxious about spiders myself, so my research for this article involved a lot of opening PDFs while squinting and leaning back from the screen. If you're a serious arachnophobe, you might want to skip this one.

In the literal sense, this question is totally reasonable, although it would be easy to rephrase it to be completely incoherent. 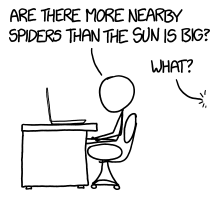 The gravitational pull from a single spider, no matter how heavy, will never beat out the Sun. The goliath bird-eating spider[1]Wikipedia helpfully notes that despite its name, it "only rarely preys on birds, with the exception of young birds." weighs as much as a large apple.[2]This is correct whether I mean the fruit or the iPhone 6+; the spider weighs about as much as each. Even if, God forbid, you were as close as possible to one of them, the pull from the Sun would still be 50 million times stronger. 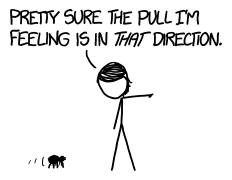 What about all the spiders in the world?

There's a well-known factoid that claims you're always within a few feet of a spider. Is this true? Arachnologist[3]Spiders, not ancient pottery.​[4]Unless the ancient pottery is full of spiders. Chris Buddle wrote a good article on this question; as you might expect, it's not literally true. Spiders don't live in the water,[5]With the exception of Argyroneta aquatica so you can get away from them by swimming, and there aren't as many spiders in buildings as in fields and forests. But if you're anywhere near the outdoors, even in the Arctic tundra, there are probably spiders within a few feet of you.

Regardless of whether the factoid is precisely true or not, there are an awful lot of spiders out there. Exactly how many is hard to say, but we can do some rough estimation. A 2009 study actually measured the total mass of spiders in sample areas in Brazil. They found one-digit numbers of milligrams of spider[6]SI unit: the "AAAAAAAAAAAAAAAAAAAAAAAAAAAA", abbreviated "AAAAAA". per square meter of forest floor.[7]That's dry mass; you have to divide by a number around 0.3 to get the live weight. If we guess that about 10% of the world's land area hosts this density of spiders, and there are none anywhere else, we come up with 200 million kilograms worldwide.[8]One survey of fields and pastures in New Zealand and England tended to find two-digit numbers of spiders per square meter. If they each weigh about a milligram, and we assume once again that about 10% of Earth's land supports that density of spiders, that gives a total spider biomass of 100 million to a billion kilograms. That agrees with our first estimate, at least.

Even if our numbers are off wildly, it's enough to answer Marina's question. If we assume the spiders are distributed evenly across the surface of the Earth, we can use Newton's shell theorem to determine their collective gravitational pull on objects outside the Earth. If you do that math, you find that the Sun's pull is stronger by 13 orders of magnitude.

Now, this calculation makes some assumptions that aren't true. Spider distributions are discrete, not continuous,[9]Spiders are quantized. and some areas have more spiders than others. What if there happen to be a lot of spiders near you?

In 2009, the Back River Wastewater Treatment Plant found themselves dealing with what they called an "extreme spider situation." An estimated 80 million orb-weaving spiders had colonized the plant, covering every surface with heavy sheets of web.[10]Which was in turn covered in heavy sheets of spider. The whole thing is detailed in a fascinating and horrifying article published by the Entomological Society of America.[12]The conclusion of the article contains this breathtaking piece of prose:

Our recommendations for amelioration included the following general points:
1) On-site personnel should be reassured that the spiders are harmless and the facility's immense shroud of silk should be presented in a positive light as a record-breaking natural history wonder.

What was the total force of gravity from all those spiders? First we need their mass; according to a paper titled Sexual Cannibalism in Orb-Weaving Spiders: An Economic Model, it's about 20 grams for males and several times that for females.[11]Not to be confused with Trade-off between pre- and postcopulatory sexual cannibalism in a wolf spider, which is a different but equally real paper. So even if you were standing next to the Black River Wastewater Treatment Plant in 2009, the pull of all the spiders inside would still be only 1/50,000,000th that of the Sun.

No matter which way you look at it, the bottom line is that we live our lives surrounded by tiny spiders on a world completely dominated by a gigantic star.

Hey, at least it's not the other way around. 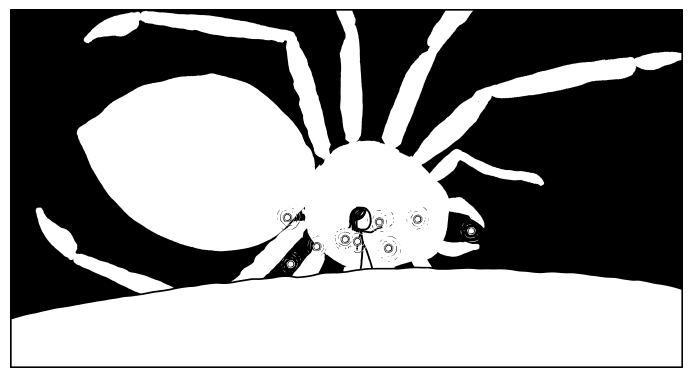