What if New Horizons hits my car?

The New Horizons spacecraft is currently flying past Pluto.[1]Ever since astrophysicist Katie Mack pointed out that "New Horizons" appears in the lyrics to A Whole New World, I've gotten it stuck in my head every time I've seen something about Pluto. For the last few days, it's been giving us our first clear look at the world, and it should be making its closest approach at the moment this article is posted. Either that, or hitting your car, I guess. 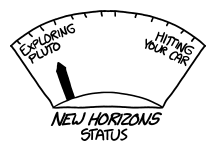 It's hard to imagine how that could happen, even if New Horizons had headed to Earth by mistake. Unless there's been an especially strange freeway accident, your car is currently within the Earth's atmosphere. All that air stops spacecraft from flying into the ground at full speed. But maybe you took a wrong turn and ended up near Charon, or maybe you drove into a freak extremely-low-pressure system, leaving no atmosphere above you. It could happen!​[2]It really, really couldn't.

New Horizons is about the size and weight of a grand piano, and is currently screaming along at about 14 kilometers per second. If it hit your car, it would be pretty bad for both vehicles.

How fast is 14 kilometers per second? Here's my favorite comparison for putting that speed in perspective: If you were standing at one end of a football field and fired a gun toward the other end, right while New Horizons flew past you, the spacecraft would reach the far end zone before the bullet made it to the 10-yard line.[3]In that same amount of time, a speeding car would travel about an inch.

This high speed means that by this afternoon, New Horizons will be on its way out of the Pluto system,[4]People often ask why New Horizons is just doing a flyby, and not sticking around to orbit Pluto. The answer is: If you can figure out a way to do that, go for it. Pluto is really far away, and to get a probe there before your career ends, you have to go really fast. When you're going that fast, it's hard to stop. (At least, if you want to stop in one piece.) and over the coming days and weeks it will let us know what it saw today. It can't talk to Earth and take photos at the same time, so right now it's spending all its time taking pictures and gathering data.

Later today, the spacecraft will pause the data-gathering for a moment to send a brief message to Earth. No results—just, "Hey, I'm still alive". If it is still alive, that is. It's flying at terrifying speed through a part of the Solar System we've never visited. There could be, say, a bunch of small rocks there.[5]In case of disaster, New Horizons has sent back a few snapshots and data dumps right before the encounter, so at least we'll have those. Or a car.

New Horizons will send the "I'm okay" message in the afternoon, but it takes light four and a half hours to get back to Earth, so it will get here around 8:53pm Eastern US time—so if you're going to have a Pluto party, that's the time to do it. You can tune in to NASA TV to watch the nervous people in mission control wait for the signal. You'll know it worked if there's lots of cheering and hugging.

For more details on the mission, check out Emily Lakdawalla's comprehensive Planetary Society post, What to expect when you're expecting a flyby, which has dates, times, and background on all the equipment. (For up-to-the-minute coverage, her Twitter feed is probably the best place to go for updates, context, and excitement.)

So what does all this mean for your car?

Passenger cars have "crumple zones," which are areas of the car designed to fold up and absorb some of the force of an impact before it reaches the passenger cabin. Unfortunately, in a hypervelocity impact, materials like metal aren't nearly strong enough to hold together. Instead of crumpling, they splash. New Horizons and your car's crumple zone would splash as bits of them passed through each other, and the resulting spray of metal would do the same to the rest of your car. From a distance, it would probably look approximately like this.

Here's the good news: NASA will have to pay for your car. Under the Convention on the International Liability for Damage Caused by Space Object, NASA and the US government would clearly be on the hook for the damage. And, since you wouldn't be considered at fault in the accident, in most states insurance companies would be legally prohibited from raising your premiums.

The situation would be slightly complicated by the fact that this would be a nuclear accident. New Horizons flies too far from the Sun to use solar panels, so it's powered by the heat from a bunch of lumps of plutonium-238. The container holding the plutonium is sturdy, since it's designed to survive atmospheric reentry (and has done so). However, it's not designed to survive entry into a Chevy. The container and the plutonium inside it would be splattered across the landscape. The US government will not only have to replace your car, it will probably have to replace much of your neighborhood.

This has actually happened before. In 1978, the Soviet satellite Kosmos 954, which carried a nuclear reactor, reentered the atmosphere and disintegrated over Canada. The Canadian government spent millions cleaning up the radioactive debris near Yellowknife. They demanded over $6 million (CAD) from the Soviets for the cleanup, and were eventually paid $3 million.

Hopefully, New Horizons is currently flying past Pluto. But don't worry; if it somehow hits your car instead, the US government will cover things. To find out which one it is—Pluto or your car—tune in to NASA TV. 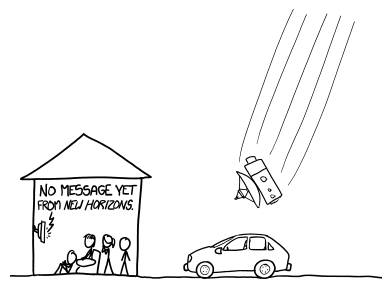 And watch your driveway.