What if you released a submarine into Jupiter's atmosphere? Would it eventually reach a point where it would float? Could it navigate? 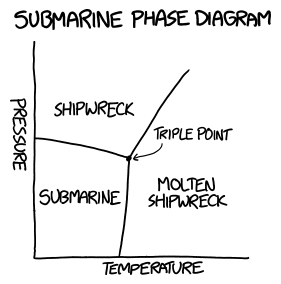 But there's another problem: Jupiter is a gas giant, but submarines—as you can figure out from etymology—go under water. 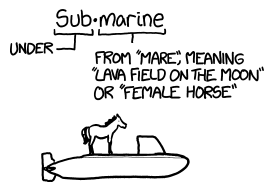 Air and water are different. This seems straightforward enough, but they're also the same in a lot of ways. They're both "fluids," and some of the same rules apply to each. In some sense, when you look up at the sky, you're looking up from the bottom of a deep sea of air.

Things float when they're less dense than the fluid around them. This works the same for balloons in air and boats in water. The late Terry Pratchett wrote a truly beautiful passage about this, in the prologue to his book Going Postal. He says that since water is in many respects a wetter form of air,[3]Sounds reasonable enough to me. as ships sink, eventually they reach a point where the water was too dense to sink any further. This layer forms an underwater surface on which shipwrecks collect, drifting around beneath the waves but far above the sea floor:

Some stricken ships have rigging; some even have sails. Many still have crew, tangled in the rigging or lashed to the wheel.

But the voyages still continue, aimlessly, with no harbour in sight, because there are currents under the ocean and so the dead ships with their skeleton crews sail on around the world, over sunken cities and between drowned mountains, until rot and shipworms eat them away and they disintegrate.

Sometimes an anchor drops, all the way to the dark, cold calmness of the abyssal plain, and disturbs the stillness of centuries by throwing up a cloud of silt.

I love that passage. It's also completely wrong. Ships sink all the way to the bottom. (Sir Terry knew this, as the rest of the passage makes clear, but he's describing how ships work on Discworld, not Earth.)

Air follows the ideal gas law. The more pressure you put on it, the smaller (and denser) it gets.

Water, on the other hand, is pretty much incompressible. When you dive into the ocean, the pressure increases as you go deeper (rising by one atmosphere every 10 meters or so) but the water's density barely changes all the way down to the sea floor.

Buoyancy depends on density, not pressure. There's a point in Jupiter's atmosphere where the pressure is equal to a little more than an Earth atmosphere—which is the pressure a submarine is used to—but the air there is barely a tenth as dense as ours. A submarine in that layer would fall even faster than it would in the air on Earth. 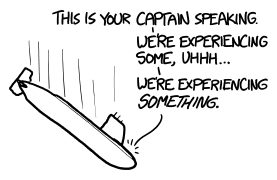 To reach a depth where it could "float" in Jupiter, the submarine would have to go halfway to the center of the planet, where the intense pressure turns the air into a metallic soup that's hotter than the surface of the Sun. The pressure there would be so high that not only would the submarine be crushed, the substances that make it up would probably be converted into new and exciting forms. It's hard to create those kinds of conditions in a lab, so we don't know a lot about how materials behave with that much pressure pushing down on them. 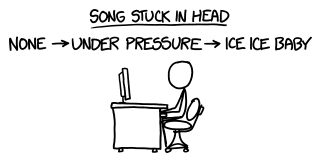 In the sea, on the other hand, the density of the fluid stays relatively constant. That means the submarine can find its appropriate pressure range and float there. In other words, submarines only work because water doesn't follow the ideal gas law.

But there's one more twist: Water sort of does obey the ideal gas law. The equations governing water under normal pressure are similar to the equation for a gas under about twenty thousand atmospheres of pressure. In a sense, this is why water seems incompressible to us—it behaves as if it's already compressed so much that an extra atmosphere or two hardly makes a difference.

So, in some ways, water and air are more similar than they seem, but in the ways that matter for a submarine, they really are different.

Which, of course, brings us back to why it's called a submarine—it operates under a "mare". A vehicle designed to operate beneath a sea of air would be called a subaerine.[5]The "gas" in "gas giant" is from the Greek word for void (χάος, kháos), so maybe a vessel (σκάφη, skáphē) that travels through a gas giant's atmosphere would be a khaoskaphe.

Which, come to think of it, is a perfectly good description of a car.