If you did fall into Jupiter's atmosphere in a submarine, what would it actually look like? What would you see before you melted or burned up?

We don't know! We've only flown spacecraft into a gas planet's atmosphere twice (both Jupiter). One had no cameras, and one went in at night (and was being disposed of, so wasn't taking pictures anyway).

If you took a submarine to Jupiter, it would burn up. Jupiter has a deep gravity well; after falling down toward it from space, you're going very fast. There's no easy way to shed that speed other than slamming into the atmosphere and letting it slow you down, but the entry is about four times faster than the Space Shuttle or Apollo Earth reentries. Only the Galileo probe has survived a Jupiter atmospheric entry.

The Galileo probe survived by being a bullet with a big heat shield, and several inches of the shield were burned away before it finished slowing down and started falling vertically by parachute. The probe only sent back about half a megabyte of data to the Galileo orbiter, and had no camera, so we don't know what it saw.

We could, I guess, try to do the same thing with a submarine—by mounting a giant heat shield on the front—but it would probably qualify as the most Kerbal vehicle ever built. 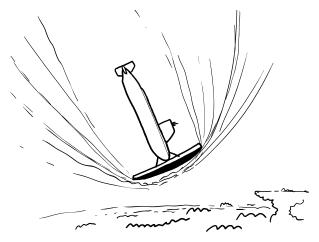 If our submarine survived, what would we see?[1]I mean, submarines don't usually have a lot of windows, but we at least have a periscope, right?

The best pictures we have of Jupiter's atmosphere are probably these carefully processed mosaics of the Great Red Spot, but they're still taken from very far away. At those resolutions, a huge Earth thunderstorm would appear as roughly one pixel. Trying to figure out what Jupiter's clouds would look like from those pictures is like using this to reconstruct these.

By combining the pictures with other science data, we've been able to put together a pretty good idea of what Jupiter's atmosphere is like, but there are some pretty big questions still unanswered which make it hard to be too confident about what it would actually look like. For example, you know the Great Red Spot? We don't know what all that red stuff is. 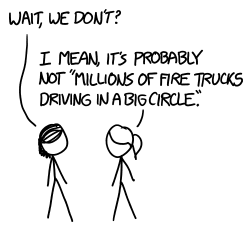 Author Michael Carroll has done a lot of thinking about planetary atmospheres, and his book Drifting on Alien Winds vividly describes of what it would be like to descend through Jupiter's clouds. He was also kind enough to answer some of my questions about Jupiter. Here's a rough sketch of what you'd see as you descended through the clouds; for more, definitely check out his book. 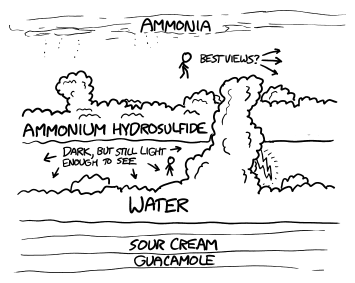 Jupiter's upper atmosphere (the part we would see before we died) has three main layers—an upper layer of haze and ammonia clouds, similar to cirrostratus clouds on Earth. Below that is a thick, reddish-brown ammonium hydrosulfide cloud layer. The lowest layer consists of white water clouds, which occasionally rise into towering thunderstorms that occasionally push through the middle layer.

Between these cloud layers, the air is probably pretty clear. At those levels, it would be less dense than the air on Earth, so you could see a long way. Thanks to Rayleigh scattering, the sky would be blue, and objects far off in the distance would fade to blue just like they do on Earth. But since Jupiter is so huge, we might not see the clouds disappear over the horizon; the towers might just fade off into the distance.

We don't really know how accurate these pictures are, though, until we send a camera to fly down into Jupiter's atmosphere and send pictures back.

Juno, scheduled to reach Jupiter next year, carries a pretty nice camera,[2]Thank you to Emily Lakdawalla for her helpful background about various spacecraft cameras, including her many thorough spreadsheets. which should give us slightly better-resolution pictures, but it still won't really give us a sense of what the cloud decks look like from within them. For that, we need to send in a probe with a camera—and there's nothing like that on the horizon. There's certainly more science value in visiting Europa than in satisfying our curiosity about the Jovian sky.

But with interplanetary cubesats soon to make their debut, who knows—maybe someone out there will put together a camera, heat shield, and parachute, and hitch a ride on the next outer planets mission. And then, finally, we'll get to look at Jupiter's clouds from both sides. 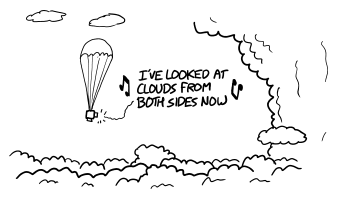