What if all of the sun's output of visible light were bundled up into a laser-like beam that had a diameter of around 1m once it reaches Earth?

Here's the situation Max is describing:

If you were standing in the path of the beam, you would obviously die pretty quickly. You wouldn't really die of anything, in the traditional sense. You would just stop being biology and start being physics.

When the beam of light hit the atmosphere, it would heat a pocket of air to millions of degrees[1]Fahrenheit, Celsius, Rankine, or Kelvin—it doesn't really matter. in a fraction of a second. That air would turn to plasma and start dumping its heat as a flood of x-rays in all directions. Those x-rays would heat up the air around them, which would turn to plasma itself and start emitting infrared light. It would be like a hydrogen bomb going off, only much more violent. 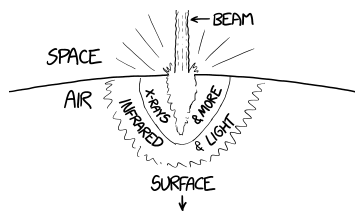 This radiation would vaporize everything in sight, turn the surrounding atmosphere to plasma, and start stripping away the Earth's surface.

But let's imagine you were standing on the far side of the Earth. You're still definitely not going to make it—things don't turn out well for the Earth in this scenario—but what, exactly, would you die from?

The Earth is big enough to protect people on the other side—at least for a little bit—from Max's sunbeam, and the seismic waves from the destruction would take a while to propogate through the planet. But the Earth isn't a perfect shield. Those wouldn't be what killed you.

Instead, you would die from twilight. 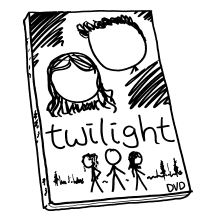 The sky is dark at night[citation needed] because the Sun is on the other side of the Earth.[citation needed] But the night sky isn't always completely dark. There's a glow in the sky before sunrise and after sunset because, even with the Sun hidden, some of the light is bent around the surface by the atmosphere.

If the sunbeam hit the Earth, x-rays, thermal radiation, and everything in between would flood into the atmosphere, so we need to learn a little about how different kinds of light interact with air.

Normal light interacts with the atmosphere through Rayleigh scattering. You may have heard of Rayleigh scattering as the answer to "why is the sky blue." This is sort of true, but honestly, a better answer to this question might be "because air is blue." Sure, it appears blue for a bunch of physics reasons, but everything appears the color it is for a bunch of physics reasons.[2]When you ask, "Why is the statue of liberty green?" the answer is something like, "The outside of the statue is copper, so it used to be copper-colored. Over time, a layer of copper carbonate formed (through oxidation), and copper carbonate is green." You don't say "The statue is green because of frequency-specific absorption and scattering by surface molecules."

When air heats up, the electrons are stripped away from their atoms, turning it to plasma. The ongoing flood of radiation from the beam has to pass through this plasma, so we need to know how transparent plasma is to different kinds of light. At this point, I'd like to mention the 1964 paper Opacity Calculations: Past and Future, by Harris L. Mayer, which contains the single best opening paragraph to a physics paper I've ever seen:

Initial steps for this symposium began a few billion years ago. As soon as the stars were formed, opacities became one of the basic subjects determining the structure of the physical world in which we live. And more recently with the development of nuclear weapons operating at temperatures of stellar interiors, opacities become as well one of the basic subjects determining the processes by which we may all die.

Compared to air, the plasma is relatively transparent to x-rays. The x-rays would pass through the plasma, heating it through effects called Compton scattering and pair production, but would be stopped quickly when they reached the non-plasma air outside the bubble. However, the steady flow of x-rays from the growing pocket of superhot air closer to the beam would turn a steadily-growing bubble of air to plasma. The fresh plasma at the edge of the bubble would give off infrared radiation, which would head out toward the horizon (along with the infrared already on the way), heating whatever it finds there. 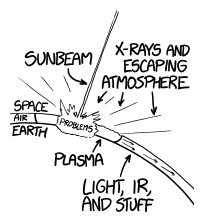 This bubble of heat and light would wrap around the Earth, heating the air and land as it went. As the air heated up, the scattering and emission from the plasma would cause the effects to propogate farther and farther around the horizon. Furthermore, the atmosphere around the beam's contact point would be blasted into space, where it would reflect the light back down around the horizon.

Exactly how quickly the radiation makes it around the Earth depends on many details of atmospheric scattering, but if the Moon happened to be half-full at the time, it might not even matter.

When Max's device kicked in, the Moon would go out, since the sunlight illuminating it would be captured and funneled into a beam. Slightly after the beam made contact with the atmosphere, the quarter moon would blink out.

When the beam from Max's device hit the Earth's atmosphere, the light from the contact point would illuminate the Moon. Depending on the Moon's position and where you were on the Earth, this reflected moonlight alone could be enough to burn you to death ... 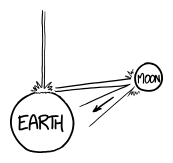 ... just as the twilight wrapped around the planet, bringing on one final sunrise.[3]Here's an image which is great for annoying a few specific groups of people: 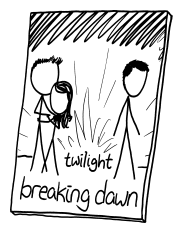 There's one thing that might prevent the Earth's total destruction. Can Max's mechanism actually track a target? If not, the Earth could be saved by its own orbital motion. If the beam was restricted to aiming at a fixed point in the sky, it would only take the Earth about three minutes to move out of the way. Everyone on the surface would still be cooked, and much of the atmosphere and surface would be lost, but the bulk of the Earth's mass would probably remain as a charred husk.

The Sun's death ray would continue out into space. Years later, if it reached another planetary system, it would be too spread out to vaporize anything outright, but it would likely be bright enough to heat up the surfaces of the planets.

Max's scenario may have doomed Earth, but if it's any consolation, we wouldn't necessarily die alone.