What if you built a siphon from the oceans on Europa to Earth? Would it flow once it's set up? (We have an idea for selling bottled Europa water.)

—A group of Google Search SREs

No, but I like where you're going with this. 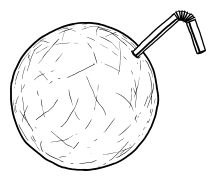 Siphons are neat—they let you pump water up and over a barrier using just a tube and gravity. You can use siphoning to empty swimming pools, fill awkwardly-shaped containers, or get up to all kinds of trouble.[1]I asked some friends to suggest which thing in their house they'd be most upset to find someone siphoning water into. Answers included: Spice drawer, gumball machine, tea collection, bottle of vitamins, watercolor paint set, bag of rice with a cell phone in it, mint-condition instant oatmeal collection, carefully tuned musical glasses, ice hotel, prizewinning sand castle, sodium action figure collection, gremlin cage, Martian soil sample, dehydrated astronaut ice cream, and rack of those water-sensing self-inflating lifeboats. 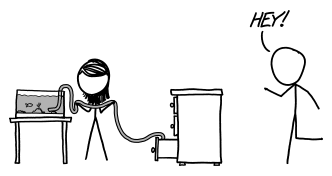 It's not necessarily obvious at first glance, but siphoning works because of air pressure. Before we answer the Europa question, it may help to go over how siphons work.

If you take a tube full of water and point the ends down, gravity will try to pull the water down, making it fall out of both sides. If the water did start to fall out, a vacuum would form in the middle, since there's no way for air to get in to fill the gap. Each column of water would then have a vacuum on one side and air on the other, which means it would be pushed back up into the tube. 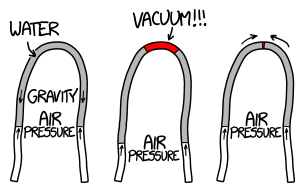 In reality, this doesn't happen; the air pressure stops the vacuum from opening up in the first place, and the water just sits there in the tube. Or, at least, it would if it were perfectly balanced.

If the water in one end is slightly lower than the other, then the column of water on that side pushes down harder against the air than the column on the other side. This imbalance causes the water to "tip" and run out of the heavier end. 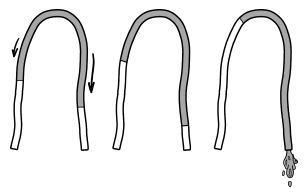 To siphon something, you can just keep feeding more water into the tube on the higher side. As long as the surface of that water is higher up than the place where the water is coming out, the siphon will keep running. 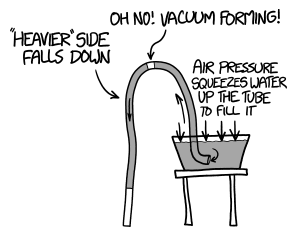 If the column of water is more than about 34 feet[2]10 meters​[3]2 giraffes high, the pressure from the weight of the water becomes too strong for Earth's air pressure to counteract, and the water does fall out from both sides and briefly create a vacuum.[4]Although as the pressure drops, the water boils away to fill it, so you can't actually get too close to a pure vacuum this way. However, if you use something like olive oil (or mercury), you can get much closer. This means that on Earth's surface, you can't siphon water over a barrier that's more than 34 feet high. In Denver, where the air pressure is lower, the limit is 28 feet. In a vacuum—in theory—you can't siphon at all.[5]In practice, it turns out siphons do work in a vacuum, at least a little bit, because the "stickiness" of the water keeps it from pulling apart in the middle.

Europa has barely any atmosphere, so you won't be able to do much siphoning. But you also can't siphon water out of the atmosphere from a planet in general. A column of atmosphere, which is miles high, pushes down only as hard as a column of water 34 feet high. The water column is smaller because water is much denser than air. As long as the stuff on top is less dense than the liquid below it, you can't use the pressure from the stuff on top to siphon the liquid up above the stuff on top.[6]Most of the time, things sort themselves into layers, with the denser ones on the bottom. Occasionally, in the Earth, layers of dense rock will end up above layers of less-dense oil. This is why—when oil wellheads break—oil can sometimes come spurting out without any help from the pumps.

Even if you could generate a lot of pressure, pumping water from Europa's surface would take some work. Europa's gravity is weaker than Earth's, which means lifting something up from the surface of Europa takes less energy, but it's still not easy. The energy required to "climb out of Europa's gravity well" is the same as the energy required to climb up 209 kilometers against Earth's surface gravity. (Earth's gravity well, by comparison, is about 6,379 kilometers "deep"—click on this comic for an illustration.)

Once you've lifted the water out of Europa's gravity well, you then have to lift it the rest of the way out of Jupiter's, which is a lot deeper. Then, you have to do more work to push the water on a trajectory where it intercepts Earth. In terms of energy, the whole task is roughly equivalent to lifting the water about 2,500 kilometers in Earth gravity: 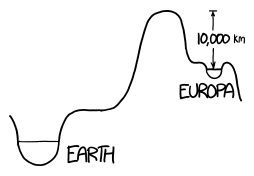 You could send the water to Earth by launching it from the surface of Europa at about 7 km/s. Conveniently, since Europa has no atmosphere, you don't need to use inefficient rockets to climb up to space. You can launch the water directly from the surface using something simpler, like a coilgun.

When the water reaches Earth, it can use atmospheric braking to slow down, and the individual bottles could be steered directly to their targets. Timing the deliveries would be tricky, sure, but it sure would be impressive if you got it right. Plus, you could totally one-up Amazon's drone delivery scheme.

At current electricity prices, the launch would cost a minimum of 50 cents (US) per bottle. Of course, getting electricity on Europa is probably a bit more expensive than getting it on Earth,[7]Or would need an awfully long cord. and setting up the purification plant and bottling operation on Europa wouldn't be cheap, to put it mildly.

All in all, you're going to have to charge an awful lot per bottle to break even on this whole operation. And if it turns out Europa's water has some weird alien pathogen in it, you might accidentally kill all your customers.[8]And, possibly, everyone else.

This may sound like your plan is pretty impractical and unrealistic, especially since there's no point to it all. Water is water. Once you've purified the water on Europa to make it drinkable, it won't be much different from water here on Earth. On the other hand, we ship water around the world from Fiji for no reason, so who knows. Maybe, with the right marketing, this idea could work. 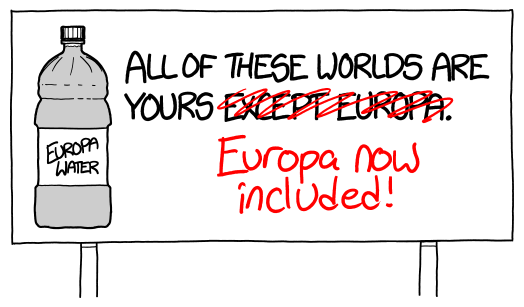