Can you use a magnifying glass and moonlight to light a fire?

At first, this sounds like a pretty easy question.

A magnifying glass concentrates light on a small spot. As many mischevious kids can tell you, a magnifying glass as small as a square inch in size can collect enough light to start a fire. A little Googling will tell you that the Sun is 400,000 times brighter than the Moon, so all we need is a 400,000-square-inch magnifying glass. Right?

Wrong. Here's the real answer: You can't start a fire with moonlight[1]Pretty sure this is a Bon Jovi song. no matter how big your magnifying glass is. The reason is kind of subtle. It involves a lot of arguments that sound wrong but aren't, and generally takes you down a rabbit hole of optics. 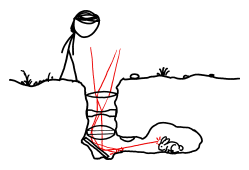 There are lots of ways to show why this is true using optics, but a simpler—if perhaps less satisfying—argument comes from thermodynamics:

Lenses and mirrors work for free; they don't take any energy to operate.[2]And, more specifically, everything they do is fully reversible—which means you can add them in without increasing the entropy of the system. If you could use lenses and mirrors to make heat flow from the Sun to a spot on the ground that's hotter than the Sun, you'd be making heat flow from a colder place to a hotter place without expending energy. The second law of thermodynamics says you can't do that. If you could, you could make a perpetual motion machine. 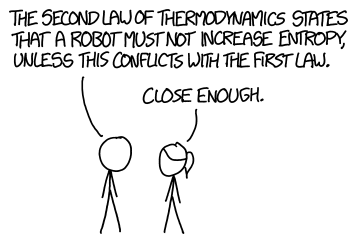 The Sun is about 5,000°C, so our rule says you can't focus sunlight with lenses and mirrors to get something any hotter than 5,000°C. The Moon's sunlit surface is a little over 100°C, so you can't focus moonlight to make something hotter than about 100°C. That's too cold to set most things on fire.

"But wait," you might say. "The Moon's light isn't like the Sun's! The Sun is a blackbody—its light output is related to its high temperature. The Moon shines with reflected sunlight, which has a "temperature" of thousands of degrees—that argument doesn't work!"

It turns out it does work, for reasons we'll get to later. But first, hang on—is that rule even correct for the Sun? Sure, the thermodynamics argument seems hard to argue with,[3]Because it's correct. but to someone with a physics background who's used to thinking of energy flow, it may seem hard to swallow. Why can't you concentrate lots of sunlight onto a point to make it hot? Lenses can concentrate light down to a tiny point, right? Why can't you just concentrate more and more of the Sun's energy down onto the same point? With over 1026 watts available, you should be able to get a point as hot as you want, right? 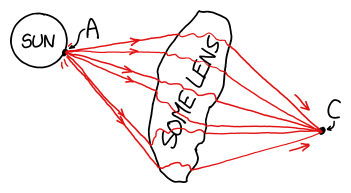 But now we have a problem. What happens if light goes back from point C toward the lens? Optical systems are reversible, so the light should be able to go back to where it came from—but how does the lens know whether the light came from B or to A?

In general, there's no way to "overlay" light beams on each other, because the whole system has to be reversible. This keeps you from squeezing more light in from a given direction, which puts a limit on how much light you can direct from a source to a target.

Maybe you can't overlay light rays, but can't you, you know, sort of smoosh them closer together, so you can fit more of them side-by-side? Then you could gather lots of smooshed beams and aim them at a target from slightly different angles.

Nope, you can't do this.[5]We already know this, of course, since earlier we said that it would let you violate the second law of thermodynamics.

It turns out that any optical system follows a law called conservation of étendue. This law says that if you have light coming into a system from a bunch of different angles and over a large "input" area, then the input area times the input angle[6]Note to nitpickers: In 3D systems, this is technically the solid angle, the 2D equivalent of the regular angle, but whatever. equals the output area times the output angle. If your light is concentrated to a smaller output area, then it must be "spread out" over a larger output angle.

In other words, you can't smoosh light beams together without also making them less parallel, which means you can't aim them at a faraway spot.

There's another way to think about this property of lenses: They only make light sources take up more of the sky; they can't make the light from any single spot brighter,[7]A popular demonstration of this: Try holding up a magnifying glass to a wall. The magnifying glass collects light from many parts of the wall and sends them to your eye, but it doesn't make the wall look brighter. because it can be shown[8]This is left as an exercise for the reader. that making the light from a given direction brighter would violate the rules of étendue.[9]My résumé says étendue is my forté. In other words, all a lens system can do is make every line of sight end on the surface of a light source, which is equivalent to making the light source surround the target.

If you're "surrounded" by the Sun's surface material, then you're effectively floating within the Sun, and will quickly reach the temperature of your surroundings.[10](Very hot)

Which gives us one last way to prove that you can't start a fire with moonlight: Buzz Aldrin is still alive. 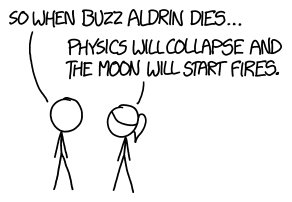