What would happen if one tried to funnel Niagara Falls through a straw?[1]This question was in reference to this Amazon review of gummy bears—but before you click, be warned that it describes the reviewer's gastrointestinal response to the candy in rather memorable detail. 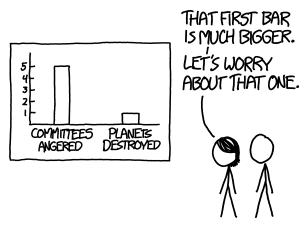 Well, that's not quite right. At the risk of stating the obvious, the real answer is, "Niagara Falls wouldn't fit through a straw."

There are limits to how fast you can push fluids through things. If you pump a fluid through a narrow opening, it speeds up. If the fluid is a gas,[3]Gasses are fluids. I know that's weird, but many things are weird. it becomes "choked" when the speed of the gas flowing through the opening reaches the speed of sound. At that point, the gas flowing through the hole can't move any faster—although you can still get more mass to flow through per second by increasing the pressure, which compresses the gas further.

For water, a different effect causes it to choke. When a fluid flows through an opening fast enough, the pressure within the fluid drops due to the Bernoulli principle. Water always "wants" to boil, but is held together by air pressure. Without enough pressure, bubbles of steam form in the water. This is called cavitation.

When the water is forced through an opening at high speed, cavitation bubbles cause it to become less dense overall. Increasing the pressure—to try to push the water through harder—only makes it boil faster. (See page 17 here for a description of this process.)[4]Valve designers try to avoid creating these steam bubbles, because after the bubbles form, they quickly collapse as the pressure rises back up past the valve, and the force from that collapse can gradually eat away at plumbing. This keeps the total amount of water making it through the opening from rising, even if the water-steam mix moves at a higher speed.

Another limit on the water flow rate comes from the speed of sound. You can't use pressure to accelerate water through an opening faster than the speed of sound (in water).[5]It's sort of like a traffic jam—forcing more cars into the back of a traffic jam won't make the ones in the front come out faster. The analogy between traffic jams and choked flows isn't perfect, but I still like it, because it's fun to imagine someone trying to solve traffic jams by using a bulldozer to push more cars into them. However, water very rarely reaches this point, because "the speed of sound in water" is very fast. If you try to make water—which is pretty heavy—go that fast, it tends to start ignoring the turns in your pipes. 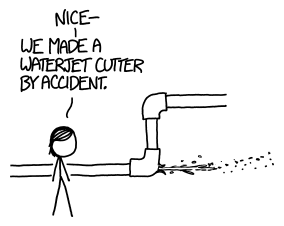 So how fast does Niagara Falls need to go to fit through a straw, and is it faster than the speed of sound? This is easy to figure out; all we need to know is the flow rate over the falls and how much area it needs to fit through.

The flow rate over Niagara Falls is at least 100,000 cubic feet per second, which is actually mandated by law. The Niagara river supplies a total of about 292,000 cubic feet per second to the falls, but much of it is diverted into tunnels to generate electric power. However, since people get mad if you turn off the world's most famous waterfall, they're required to leave at least 100,000 of those cubic feet per second flowing over the falls for everyone to look at. (50,000 at night or during the off-season). Sometime in the next few years, the falls may be turned off for maintanence. And probably to see what cool stuff they can find. 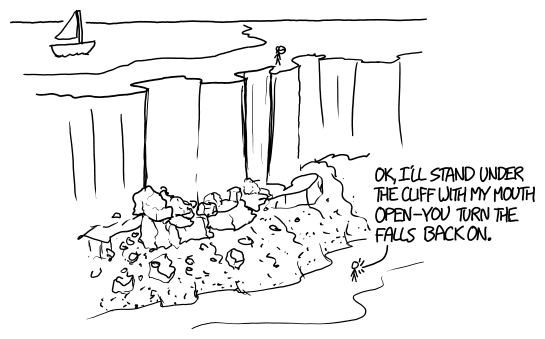 (Important note: If you divert the water into a straw, you'll be in violation of the 1950 treaty establishing the "100,000 cubic feet per second" limit. This is monitored by the International Niagara Committee, which consists of one American and one Canadian.[6]Currently, they are Aaron Thompson of Environment Canada and Brigadier General Richard Kaiser of the US Army Corps of Engineers. I'm guessing their enforcement protocol is just some variation on "filing a report," but I like to imagine that they're empowered to physically return the stolen water to the falls by any means necessary. They'll probably be upset with you, as will the other boards I mentioned earlier, so proceed at your own risk.)

A typical straw is about 7mm in diameter. To find out how fast the water flows, we just divide the flow rate by that area. If the result is greater than the speed of sound, our flow will probably be choked, which will lead to problems.

Apparently, our water will be going one-quarter of the speed of light. 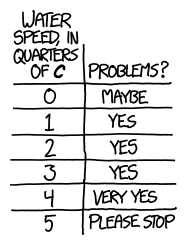 On the plus side, we don't need to worry about cavitation, since these water molecules would be going fast enough to cause all kinds of exciting nuclear reactions when they hit the walls of the straw. At those high energies, everything is a plasma anyway, so the concepts of boiling and cavitation don't even apply.

But it gets worse! The recoil from the relativistic water jet would be pretty strong. It wouldn't be enough to push the North American plate south, but it would be enough to destroy whatever device you were using to create the jet.

No machine could actually accelerate that much water to relativistic speeds. Particle accelerators can get things going that fast, but they're typically fed from a small bottle of gas. You can't just plug Niagara Falls into the accelerator input. Or, at least, if you did, the scientists would get awfully mad.

Which is for the best, since the power of the particle jet created by this scenario would be greater than the power of all the sunlight that falls on Earth. Your "waterfall" would have a power output equivalent to that of a small star, and its heat and light would quickly raise the temperature of the planet, boil away the oceans, and render the whole place uninhabitable.

And yet I bet someone would still try to go over it in a barrel. 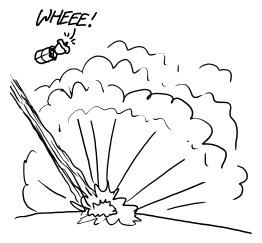