Since rainbows are caused by the refraction of the sunlight by tiny droplets of rainwater, what would rainbow look like on Earth if we had two suns like Tatooine?

A planet with double suns would have double rainbows.

Or rather, quadruple rainbows. Our rainbows here on Earth are already double rainbows—there's a second, fainter bow above the main one. You can't always see this second rainbow, since the clouds need to be just right, so people get excited when they see one. 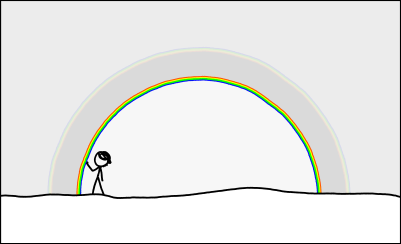 The area between the two rainbows is darker than the area outside because raindrops reflect light more strongly in certain directions. That region has a name, by the way—it's called Alexander's dark band. 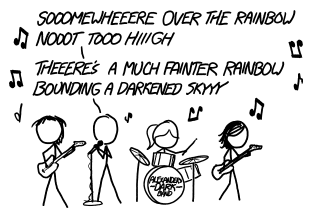 The first and second rainbows are the only ones you can see easily, but there are actually many more bows beyond those two, each one fainter than the last. Rainbows are formed by light bouncing around in raindrops, and the different bows are formed by different paths the light can take. The main rainbow is formed by the most common paths through the droplet, and other paths—where some of the light bounces around in more unusual ways—make the fainter second, third, fourth, and even fifth rainbows.

Usually, only the first and second rainbows are bright enough to see; it was only in the last five years that anyone took pictures of the third, fourth, and fifth rainbows.

Rainbows appear on the other side of the sky from the Sun, so to figure out what a double rainbow would look like on a planet with two suns, we need to figure out where the suns usually appear in the sky on that kind of planet.

There are planets with two suns out there, although we didn't know that for sure until recently. Double-star planets come in two main varieties:

If you lived on [the other kind of planet],[3]Sorry. the two Suns would spend most of the year in different parts of the sky. Depending on how big they were, they may also be very different in brightness. If you were orbiting the larger star, the smaller one might be no brighter than the Moon,[4]Which would still be bright enough to cast a rainbow! or even look like an ordinary planet or star.

Tatooine, in Star Wars, looks like it's probably a circumbinary planet. The two stars appear pretty close together in the sky and similar in color and size, so it seems reasonable to guess they're actually near one another, with Tatooine orbiting both of them. Two suns would create two overlapping rainbows. The main bow of the rainbow is a circle about 84 degrees across, centered in the sky exactly opposite the Sun.[5]This is why you never see more than half of a rainbow above the horizon. If the center of the rainbow were above the horizon, it would mean the Sun was below it behind you, so there wouldn't be sunlight to make a rainbow in the first place. The farther apart the two suns were, the farther apart the rainbows would be. If the two suns were 84 degrees apart, the main bows of the two rainbows would barely touch.

A pair of suns 84 degrees apart would be possible around [the other kind of planet], but not around Tatooine-type[6]If Star Wars had just used the other kind of planet, we could use its name for them and solve this problem. circumbinary planets. The reason is simple: A planet orbiting two stars can't get too close to them or its orbit becomes unstable. If it gets too close, the irregular tugging from the gravity of the two stars as they orbit will eventually cause the planet to crash into one of them or get flung out of the system.

For a system with two similar-sized stars, this "critical radius" is around six times the distance between the two stars.[7]This is a very rough number; it can range from four to eight depending on the exact arrangement. We've found a lot of planets close to that critical radius, which suggests that maybe they slowly migrate inward until they reach it and are ejected or destroyed. Strangely, we haven't found many big Jupiter-sized planets around binary stars in general; we should be seeing them if they're there, so the lack of them is a mystery. This means that the two suns would never get more than about 20 degrees apart in the sky: 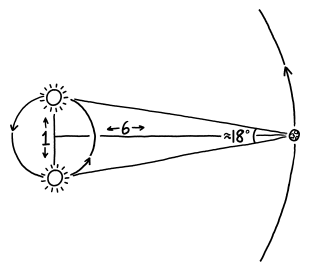 This tells us that the two rainbows in a Tatooine-like system would always overlap.[8]Assuming the raindrops are made of water, or something with similar refractive properties. The colors would blend together where the bows crossed, and the dark bands would too.

I suppose doubling all the rainbows would also double the number of pots of gold at the end of each rainbow.[9]Come to think of it, do our rainbows have one pot of gold or two? I've never really thought about it. And it's not just pots of gold; I guess we'd need to rethink all kinds of rainbow references.

Overlapping rainbows would be beautiful, but definitely a lot more complicated. 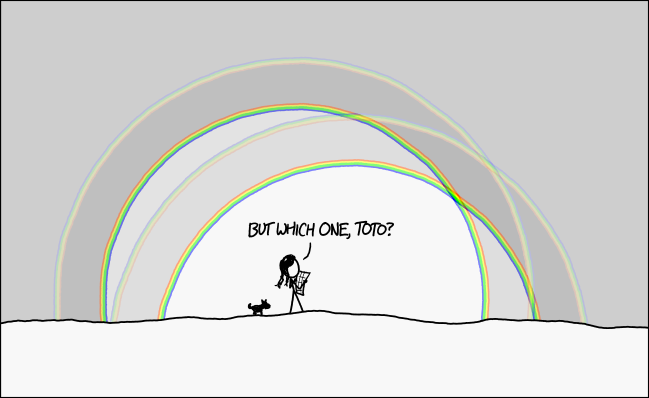