How many fireflies would it take to match the brightness of the Sun?

Not that many! I mean, it's definitely one of those gigantic numbers with lots of zeroes, but in the grand scheme of things, there aren't as many zeroes as you might expect. 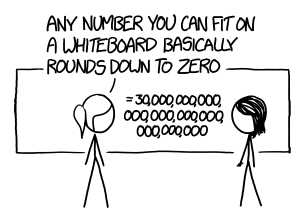 Our first question: Where does firefly light even come from?

Fireflies may look like they're full of glow-in-the-dark goo, but the light they give off actually comes from a thin layer on their surface.[1]You can see some diagrams of the organs here and here. Lots of insects have glowing surface patches, and some of those patches have been studied carefully to calculate their brightness. A 1928 paper on beetles called "headlight bugs"[2]Such a great name. found that their glowing patches, which were a little over a square millimeter in area, emitted about 0.0006 lumens of light. Fireflies have luminous organs (bright patches) that are about the same size as those of headlight bugs,[3]See this paper on some common American fireflies. and their organs tend to have a similar peak brightness per area, so this figure is a good guess for the brightness of a firefly's lantern.

Firefly lights aren't "always-on." They blink on and off, with patterns that vary from species to species and situation to situation. These flashes carry information, some of which you can decode using this delightful chart.[4]You can also use LEDs to mess with firefly patterns, which feels strangely invasive.

To get the brightest light, let's assume we're using a species with a mostly-on duty cycle—like a headlight bug. How does its 0.0006-lumen light output compare to the Sun?

In other words, per pound, fireflies are brighter than the Sun. Even though bioluminescence is millions of times less efficient than the Sun's fusion-powered glow, the Sun can't afford to be as bright because it has to last billions of times longer.[5]If you like Fermi problems—and silly equations—there's an interesting route you can take to this answer without doing any research on fireflies or the Sun at all. Instead, you can just plug this equation into Wolfram|Alpha: (5 billion years / (4 hours/day * 3 months)) / (1% * (speed of light)^2 / (3200 calories/pound)).

Let's walk through it: The first half—the numerator—is a guess for the ratio between how long the Sun has to keep glowing compared to how long a firefly does. I took a wild guess that fireflies have to light up for a few hours each night for one summer, while the Sun has to last another five billion years. The second half—the denominator—is a guess as to the ratio between the stored energy in a pound of firefly vs a pound of star. Nuclear fusion converts about 1% of the input matter to energy, so from E=mc2, the stored energy is c2 kg/kg, whereas animal matter (say, butter) is about 3,200 food calories per pound. The result should tell us the ratio between a firefly's brightness per pound and the Sun's. And the answer we get says that the fireflies are a few thousand times brighter—which is roughly what we got from working through it the other way!

It's true that we got lucky with some of our guesses, but since we made errors in both directions, they tended to cancel out. This kind of thing works more often than it seems like it should!

But wait! A mass of fireflies that big would run into problems. Besides the obvious problems with gathering that many animals in one place, the fireflies would block each others' light. The inner fireflies would be hidden behind the outer ones, and the total brightness would be limited.[6]But the light from the core fireflies wouldn't just vanish. After bouncing around a few times, it would be absorbed by neighboring fireflies, which would get warmer. This is sort of like how radiation makes its way out of the Sun's core—but in the case of the fireflies, they'd die from the heat before the process got very far. 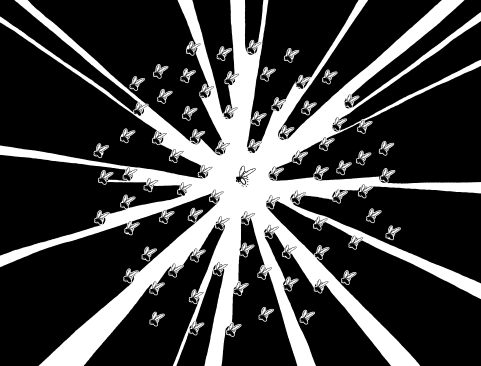 Since the only light that matters is the light at the surface, we could imagine arranging the fireflies in a hollow sphere, with their lanterns pointing outward. Or, to make thing simpler, we could imagine a single giant firefly. How big would it need to be? 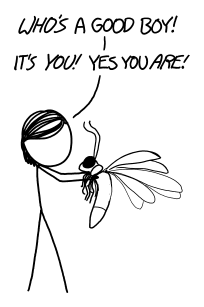 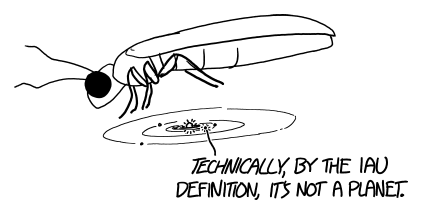 Black holes last a long time, but they eventually evaporate through Hawking radiation. When the black hole era of our universe comes to an end, black holes will evaporate one by one, with the smallest evaporating faster. Since our firefly's black hole would be the largest one in the universe, it would be the last to evaporate—a final outpost of irregularity in a universe fading toward heat death.

We should probably add that to the identification chart, just in case.