Would a toaster still work in a freezer?

—My Brother, My Brother and Me, Episode 343, discussing a Yahoo Answers question

On a recent episode of Justin, Travis, and Griffin McElroy's terrific advice podcast, My Brother, My Brother and Me, the brothers pondered a Yahoo Answers question about what would happen if you put a toaster inside a freezer. (The discussion comes around the 36-minute mark.)

They have a fun discussion of a few aspects of the problem before eventually moving on to the next question. Since they don't really settle on a final answer, I thought we could help them out by taking a closer look at the physics of freezer toasters. 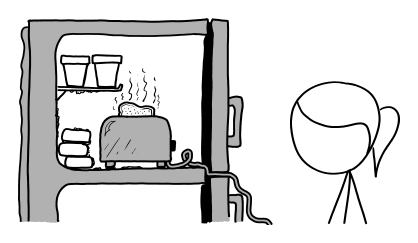 (A quick safety note: If you actually do this, keep in mind that the toaster may melt some of the ice in the freezer, leaving you with a running electrical appliance in a pool of water.)

For starters, the answer: The toaster would win. The freezer wouldn't do its job. Toasters beat freezers. 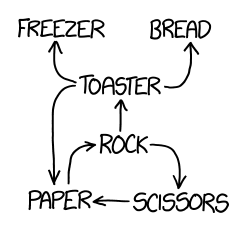 It's easy to think of a toaster and freezer as equivalent—one cools things down and the other warms them up. But toasters heat things up a lot more than freezers cool them down.

The coils in regular toasters get hot enough to glow, which means they're over about 600°C. Since the toaster is operating at such high temperatures, it would hardly notice whether the surrounding environment is 20°C (room temperature), 4°C (a fridge), or -15°C (a freezer).[1]The zero on our usual temperature scales can confuse things, since it makes it seem like going from 10° to 20° is "doubling" the temperature. But the "zero" on the Celsius scale is just a point chosen by convention. If we switch to Kelvin, which counts in degrees above absolute zero, a freezer is 260 K, a fridge is 275 K, a normal room is 295 K ... and the heating element in a toaster is 900 K.

The toaster needs to heat its coils from room temperature to somewhere over 600°C. From the toaster's point of view, a 20- or 40-degree change in starting temperature hardly matters. The coils will get hot, and then the bread will get hot, too. If the bread is colder at the start, the toaster will have to heat it a little longer to get it up to ideal toasting temperature, but it will have no trouble getting there. As anyone who's ever burned a piece of toast knows, toasters are definitely capable of heating bread to above the ideal temperature for toast.

In their discussion, the McElroys brought up another question: Even if the toaster can still toast bread at first, would it struggle to stay warm over time? If you left both the toaster and the freezer running, who would win in the long term?

The answer is that the toaster would still win. A toaster produces about a thousand watts of heat, and the cooling system in a household freezer can't remove heat that fast. In fact, since freezers are so well insulated, the inside of the freezer would probably get much hotter than the rest of the house, and eventually the toaster and/or the freezer would probably overheat.[2]Either device have a safety cutoff that stops things from actually melting down, but it's probably not wise to count on that in this situation.

Refrigerators and freezers work by soaking up heat from their interior and dumping it out the back.[3]That's why the area behind your freezer is warm, and why you can't cool a room by leaving the fridge door open. In a sense, they're more efficient than toasters. Fridges have a "coefficient of performance" of 2 or 3, which means it only takes them 1 unit of electrical energy to move 2 or 3 units of heat energy from the interior to the exterior. A toaster, on the other hand, produces 1 unit of heat from 1 unit of electricity. But since the compressor in a fridge-freezer typically only uses 100 or 150 watts when it's running,[4]You can see some real-world graphs of refrigerator power usage, courtesy people with home electricity meters, with a simple Google Image search. The distinctive on-off square-wave pattern is the compressor switching on and off throughout the day, while the big spikes are the heating element that keeps frost from building up on the coils. This power consumption is split between the fridge and the freezer, but if the fridge is already cold, most of the energy will be spent fighting with the toaster. so even with the efficiency multiplier, it can't keep up with the toaster's 1000+ watts of heat production. 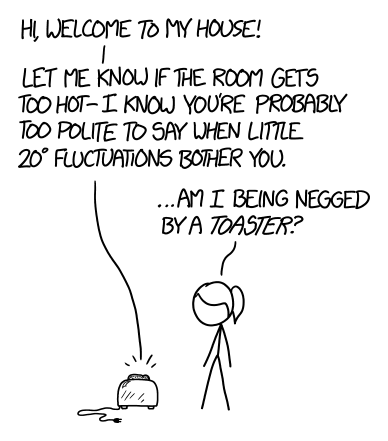 If you happen to live in the Canadian city of Winnipeg, you can check this experimentally. The winter temperature at night in Winnipeg is about the same as the inside of a freezer, so the environment there effectively simulates a freezer with infinite capacity to absorb heat. Suppose you put a toaster out on your porch one night, plugged in by an extension cord, and leave it running for a few hours, going outside every so often to collect the toast and put in some fresh bread. What will happen? Simple: You'll quickly be eaten by wolves. 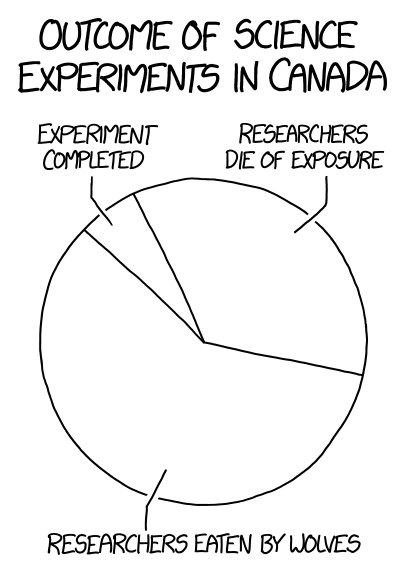 But assuming you survive the experiment, you should find that the toaster doesn't have trouble working in the cold air. It may take a bit longer to get the bread properly browned, but unless the wind is extremely strong, it should be able to manage it fine. After all, to a toaster, all weather is cold.

The difference between what humans consider "cold" and "warm" is negligible in a lot of high-temperature processes. For example, Antarctica has a well-equipped fire department. It might seem strange to worry about things getting too hot in the coldest place on Earth, but fire poses a serious threat to the researchers there. After all, the place is dry, windy, and doesn't have a lot of liquid water sitting around to douse a flame with. Sure, it's cold—but to a fire, everything is cold.

On the other hand, there are no wolves in Antarctica. So as long as you don't mind a trip—and you get clearance from the Antarctica fire department—you can go there to enjoy your outdoor freezer toast in peace. 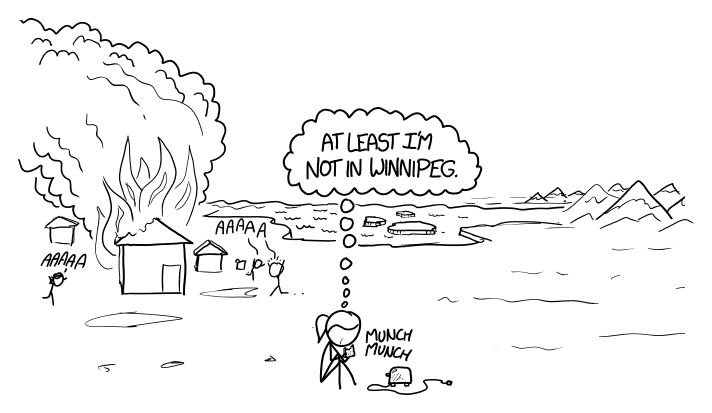