I used to work on a fisheries crew where we would use an electro-fisher backpack to momentarily stun small fish (30 - 100 mm length) so we could scoop them up with nets to identify and measure them. The larger fish tended to be stunned for slightly longer because of their larger surface area but I don't imagine this relationship would be maintained for very large animals. Could you electrofish for a blue whale? At what voltage would you have have to set the e-fisher?

So you want to give endangered whales powerful electric shocks. Great! I'm happy to help. This is definitely a very normal thing to want to do.

There are various electrofishing setups, but they all operate on the same general principle: An electric current flows through the water, and also through any fish that happen to be in the water. The electric current, through a few different physical effects, draws the fish toward one of the electrodes and/or stuns them. 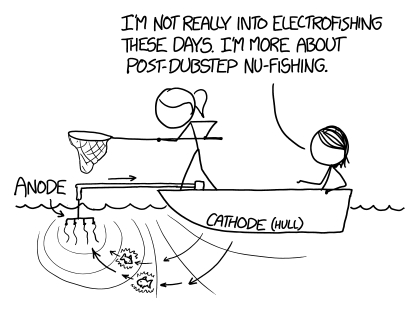 For a long time, people didn't really notice that electrofishing injured fish at all. For the most part, stunned fish seemed to be fine after a few minutes. However, they frequently suffer from internal damage which isn't obvious from the outside. The electric current causes involuntary muscle spasms, which can fracture the fish's vertebrae. As this paper shows, these kinds of spinal injuries are more common and severe in larger fish.

As you mention, for a given electrofishing setup, larger fish are usually more affected than smaller ones.[1]This can lead to larger fish being overrepresented in sampling studies. Why? Well, we don't know. In their comprehensive 2003 study Immobilization Thresholds of Electrofishing Relative to Fish Size, biologists Chad Dolan and Steve Miranda modeled the way electric currents stun fish of different sizes, but caution that "no adequate conceptual system exists to explain the effects of size on electroshock thresholds from the perspective of electric fields."

None of these studies dealt with animals anywhere near the size of whales. The largest fish in Dolan and Miranda's study were still quite small. This experiment tested larger fish up to 80cm long,[2]The fish they used in the experiment grew rapidly to a range of sizes, mainly because the larger ones kept eating their smaller siblings. but nothing whale-sized.[3]There's been at least one case of dolphin death linked to illegal electrofishing. Since we don't know exactly why larger fish respond differently, it's hard to confidently extrapolate.

Fish are typically[4]Actual quote from that paper: "The results for these tests were unsettling ... this observation was so unexpected that we stopped the experiment to recalibrate the equipment." stunned by equipment delivering about 100 µW of power per cm3 of body volume, so for a whale, that would be about 20 megawatts.

But there's a catch: Most electrofishing is done in fresh water. Unfortunately, blue whales live in the ocean,[5]I mean, unfortunately for Madeline. It's fortunate for the whales. where the salt water conducts electricity much more easily. That might seem like good news for our electrofishing plans, but it turns out to make it much more challenging.

Electrofishing works best when the water and the target animals are about equally conductive. In highly conductive saltwater, most of the current flows past the animals in the water rather than through them. This means that ocean electrofishing requires much more power. Using our simple extrapolation, instead of 20 megawatts, we might need a gigawatt. In other words, you'll need to bring a large nuclear generating station. 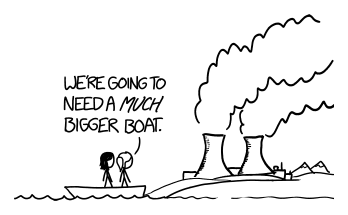 Simple extrapolation is misleading here, since we know that large animals respond to electricity differently. How differently? Well, according to an electrofishing.net post by Jan Dean, a human who fell into the water in front of a typical electrofishing boat could easily die.[6]While it sounds dangerous, people aren't often killed during electrofishing accidents. The 2000 EPA report "New Perspectives in Electrofishing" comments that "In the United States, since World War II, only about five electrocutions during electrofishing have been documented." I assume they just mean records weren't kept before World War II, but it's technically possible that the war involved so many electrofishing deaths that they need to exclude it from the stats. Blue whales, which are even larger than humans,[citation needed] would presumably fare even worse.

Electrofishing temporarily stops a fish's heart.[7]Until reading this paper, I didn't know clove oil was used as a fish anesthetic. You learn something new every day! The fish seem to recover, most of the time, but humans—and probably whales—have a harder time with cardiac arrest.

It's possible that giving blue whales massive electrical shocks isn't as good an idea as it sounded at first.

That's not to say there's no place in science for giving random electric shocks to large aquatic animals. A project at the Denver Wildlife Research Center used electrofishing-style equipment—linked to an infrared camera—to repel beavers, ducks, and geese from selected areas. Apparently, the results were "encouraging."[8]The equipment kept the beavers away, although they returned as soon as it was turned off. It also worked on ducks and geese, although they had some problems with infrared waterfowl detection. The birds would usually take flight when the equipment turned on, although if it was cold enough, they'd just sluggishly paddle away.

So electrofishing equipment probably can't help you catch blue whales. However, if you're having trouble keeping them out of your backyard pond ...

... it's possible the Denver Wildlife Research Center can help you out.