If one randomly chosen extra person were to die each second somewhere on Earth, what impact would it have on the world population?

Every second, 1.8 humans die and 4.2 humans are born. Under Mr. Petzall’s plan, the number of deaths would increase to 2.8.

This randomized culling would obviously be a big deal—it would be responsible for over a third of all deaths—but, at least for a while, our population would continue to grow.

There are about twenty countries with death rates below 4.64 per 1,000. It’s an odd bunch, including the Dominican Republic, Brunei, Singapore, Saudi Arabia, Kuwait, the Maldives, and Paraguay. These are the countries where Guy’s program would be responsible for the majority of all deaths.

The death rate in all of these countries is going to go up. It has to, because of math. It seems intuitively obvious that death rates below 10 per 1,000 are unsustainable. If fewer than one person out of every hundred dies each year (and enough are born to sustain the population) then the average person must have to wait over a hundred years to die—which is clearly not compatible with our current lifespans.

In those countries with low single-digit death rates, the rates are guaranteed to rise in the future. This includes the United States, whose death rate is 8.40 per 1,000—a number which will go up substantially as the Baby Boomers age.

A rate of one death per second isn’t enough to reverse population growth at present, but it would have been until recently. In 1950, the world’s population was only 2.52 billion. One death per second would mean 12.5 annual deaths per 1,000 people, almost triple the number in 2013. At the start of the early 20th century, this would have been enough to reverse population growth, and within a handful of decades—as population levels off—it will be again. Of course, if people die faster, this in turn has an effect on birth rates—as people change their behavior in response to the change in mortality—so the actual result would be more complicated. 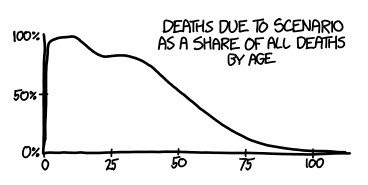 When would these deaths happen?

Given the numbers of aircraft in the air at any given time, it’s certain that some pilots would die while flying. This wouldn’t be a disaster, though, since large commercial airliners have multiple crew members who can take over.

Cars would be a different story. Since about 10 million Americans are driving at any given time, 127 will die behind the wheel each day (plus a smaller but still significant number of passengers, pedestrians, and other drivers). Interestingly, this is only a little larger than the number of Americans who die in car accidents every day already. (This number has been declining, as a percentage of population, since the 1960s, and as a percentage of miles traveled since at at least the 1920s.)

About 50 million outpatient surgery procedures are performed each year. If they’re primarily performed by one surgeon and each last an average of half an hour, then about 13 surgeons per year will unexpectedly die mid-surgery (as will 13 extra patients). This is a scary thought. But to put it in perspective, that’s about the number of surgeons who will operate on the wrong body part or wrong patient every two days. It’s not that the scenario isn’t scary. It’s just that reality is far more terrifying.

Lastly, what about our leaders?

Members of Congress die in office at a rate of two or three per year, or about five per Congress. This used to be much higher, as explained in this strangely florid paper. 29 members of Congress died during 1939 and 1940, the two years the 76th Congress was in session.  In Guy’s scenario, the current rate would double, leading to a loss of 10 per Congress. This would certainly be tragic, but it would be no higher than the levels seen as recently as the 1960s.

All in all, the losses would be dramatic, but not devastating to our species as a whole. And really, in the end, the global death rate is 100%—everyone dies. 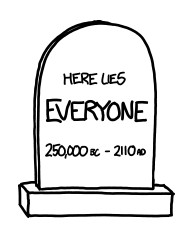 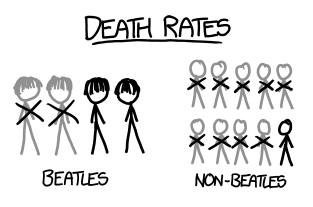