What if I took a swim in a typical spent nuclear fuel pool? Would I need to dive to actually experience a fatal amount of radiation? How long could I stay safely at the surface?

Assuming you’re a reasonably good swimmer, you could probably survive treading water anywhere from 10 to 40 hours. At that point, you would black out from fatigue and drown. This is also true for a pool without nuclear fuel in the bottom.

Spent fuel from nuclear reactors is highly radioactive. Water is good for both radiation shielding and cooling, so fuel is stored at the bottom of pools for a couple decades until it’s inert enough to be moved into dry casks. We haven’t really agreed on where to put those dry casks yet. One of these days we should probably figure that out.

Here’s the geometry of a typical fuel storage pool:

The heat wouldn't be a big problem. The water temperature in a fuel pool can in theory go as high as 50°C, but in practice they're generally between 25°C and 35°C—warmer than most pools but cooler than a hot tub.

For the kinds of radiation coming off spent nuclear fuel, every 7 centimeters of water cuts the amount of radiation in half.

The most highly radioactive fuel rods are those recently removed from a reactor. Based on the activity levels provided by Ontario Hydro in this report, this would be the region of danger for fresh fuel rods: 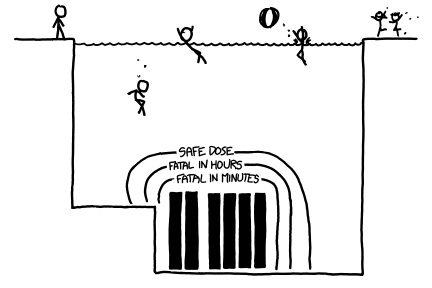 Swimming to the bottom, touching your elbows to a fresh fuel canister, and immediately swimming back up would probably be enough to kill you.

Yet outside the outer boundary, you could swim around as long as you wanted—the dose from the core would be less than the normal background dose you get walking around. In fact, as long as you were underwater, you would be shielded from most of that normal background dose. You may actually receive a lower dose of radiation treading water in a spent fuel pool than walking around on the street. 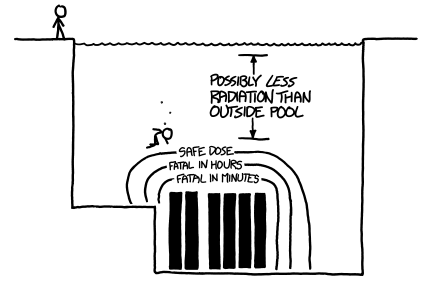 That’s if everything goes as planned. If there’s corrosion in the spent fuel rod casings, there may be some fission products in the water. They do a pretty good job of keeping the water clean, and it wouldn’t hurt you to swim in it, but it’s radioactive enough that it wouldn’t be legal to sell it as bottled water. (Which is too bad—it’d make a hell of an energy drink).

We know spent fuel pools can be safe to swim in because they’re routinely serviced by human divers.

However, these divers have to be careful.

On August 31st, 2010, a diver was servicing the spent fuel pool at the Leibstadt nuclear reactor in Switzerland. He spotted an unidentified length of tubing on the bottom of the pool and radioed his supervisor to ask what to do. He was told to put it in his tool basket, which he did. Due to bubble noise in the pool, he didn’t hear his radiation alarm.

When the tool basket was lifted from the water, the room’s radiation alarms went off. The basket was dropped back in the water and the diver left the pool. The diver’s dosimeter badges showed that he’d received a higher-than-normal whole-body dose, and the dose in his right hand was extremely high.

The object turned out to be protective tubing from a radiation monitor in the reactor core, made highly radioactive by neutron flux. It had been accidentally sheared off while a capsule was being closed in 2006. It sank to a remote corner of the pool floor, where it sat unnoticed for four years.

The tubing was so radioactive that if he’d tucked it into a tool belt or shoulder bag, where it sat close to his body, he could’ve been killed. As it was, the water protected him, and only his hand—a body part more resistant to radiation than the delicate internal organs—received a heavy dose. 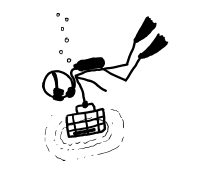 So, as far as swimming safety goes, the bottom line is that you’d probably be ok, as long as you didn’t dive to the bottom or pick up anything strange.

But just to be sure, I got in touch with a friend of mine who works at a research reactor, and asked him what he thought would happen to you if you tried to swim in their radiation containment pool.

“In our reactor?” He thought about it for a moment. “You’d die pretty quickly, before reaching the water, from gunshot wounds.”