What would happen if a hair dryer with continuous power was turned on and put in an airtight 1x1x1 meter box?

All 1875 watts have to go somewhere. No matter what happens inside the box, if there’s 1875 watts of power being used, eventually there will be 1875 watts of heat flowing out.

This is true of almost any powered device (though not necessarily those plugged into a second device. If a charger is connected to something, like a smartphone or laptop, power can be flowing from the wall through the charger into the device.)

But back to the box.

Heat will flow from the hair dryer out into the box. If we assume the dryer is indestructible, the interior of the box will keep getting hotter until the outer surface reaches about 60°C (140°F). At that temperature, the box will be losing heat to the outside as fast as the hair dryer is adding it inside, and the system will be in equilibrium. 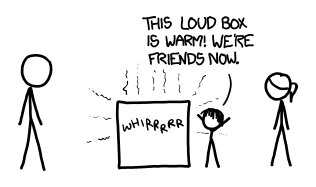 The equilibrium temperature will be a bit cooler if there’s a breeze, or if the box is sitting on a wet or metallic surface that conducts away heat quickly.

If the box is made of metal, 60°C is hot enough to burn your hand if you touch it for more than five seconds. If it’s wood, you can probably touch it for a while, but there’s a danger that parts of the box in contact with the mouth of the hair dryer will catch fire.

The inside of a box will be like an oven. The temperature it reaches will depend on the thickness of the box wall; the thicker and more insulating the wall, the higher the temperature. It wouldn’t take a very thick box to create temperatures high enough to burn out the hair dryer. 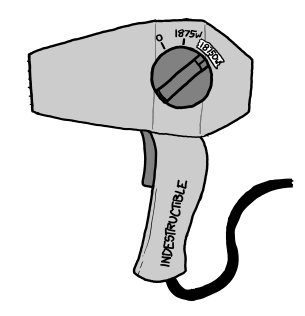 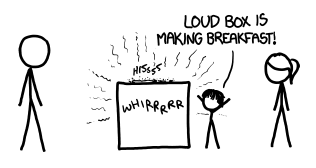 I wonder how high this dial goes. 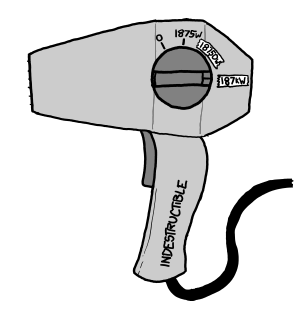 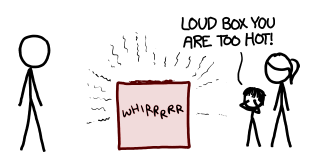 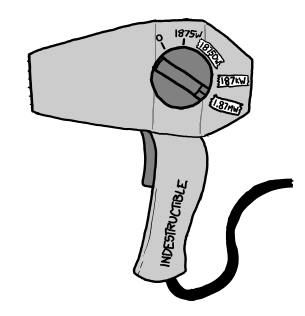 Two megawatts pumped into a laser is enough to destroy missiles. 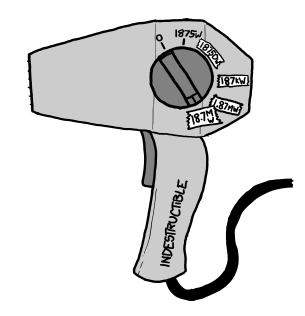 18 megawatts are flowing into the box.

The surface of the box reaches 2400°C. If it were steel, it would have melted by now. If it’s made of something like tungsten, it might conceivably last a little longer.

Just one more, then we'll stop. 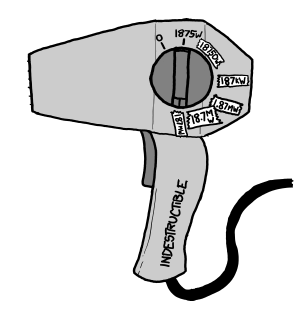 187 megawatts is enough to make the box glow white. Not a lot of box materials can survive these conditions, so we’ll have to assume the box is indestructible.

Before it can burn its way through the floor, someone throws a water balloon under it. The burst of steam launches the box out the front door and onto the sidewalk. (Note: If you’re ever trapped with me in a burning building, and I suggest an idea for how we could escape the situation, it’s probably best to ignore me.) 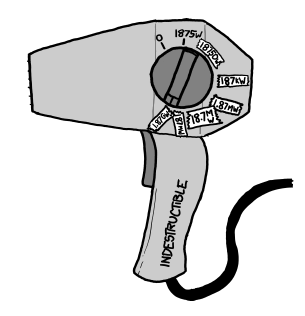 1.875 gigawatts (I lied about stopping). According to Back to the Future, the hair dryer is now drawing enough power to travel back in time. 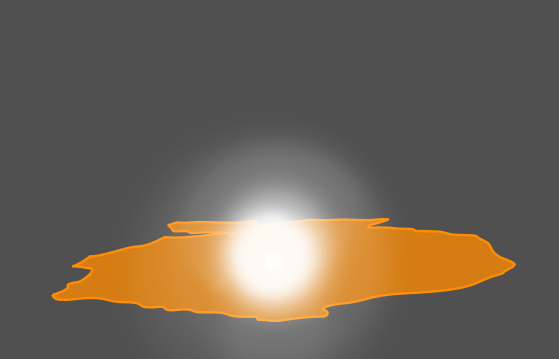 The box is blindingly bright, and you can’t get closer than a few hundred meters due to the intense heat. It sits in the middle of a growing pool of lava. Anything within 50-100 meters bursts into flame. A column of heat and smoke rise high into the air. Periodic explosions of gas beneath the box launch it into the air, and it starts fires and forms a new lava pool where it lands. 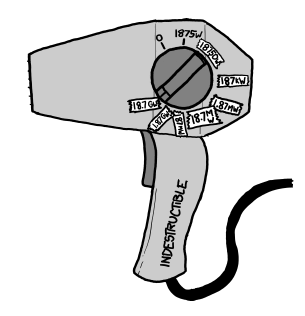 18.7 gigawatts. The conditions around the box are similar to those on the pad during a Space Shuttle launch. The box begins to be tossed around by the powerful updrafts it’s creating.

In 1914, H.G. Wells imagined devices like this in his book The World Set Free. He wrote of a type of bomb that, instead of exploding once, exploded continuously, a slow-burn inferno that started inextinguishable fires in the hearts of cities. The story eerily foreshadowed the development, 30 years later, of nuclear weapons.

The box is now soaring through the air. Each time it nears the ground, it superheats the surface, and the plume of expanding air hurls it back into the sky. 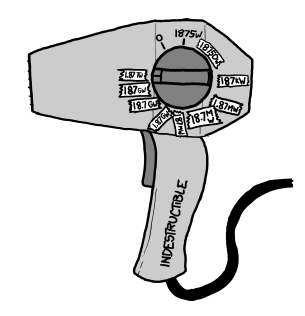 1.875 terawatts is like a house-sized stack of TNT going off every second. 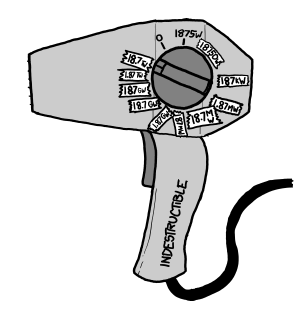 A trail of firestorms—massive conflagrations which sustain themselves by creating their own wind systems—winds its way across the landscape.

A new milestone: The hair dryer is now, impossibly, consuming more power than every other electrical device on the planet combined. 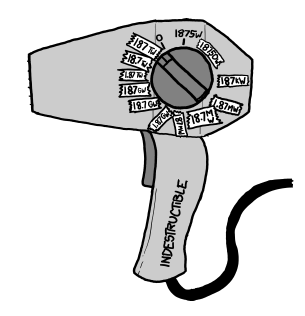 The box, soaring high above the surface, is putting out energy equivalent to three Trinity tests every second.

At this point, the pattern is obvious. This thing is going to skip around the atmosphere until it destroys the planet. 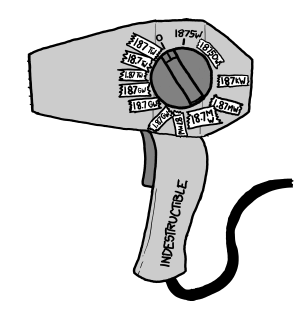 We turn the dial to zero as the box is passing over northern Canada. Rapidly cooling, it plummets to Earth, landing in Great Bear Lake with a plume of steam. And then … 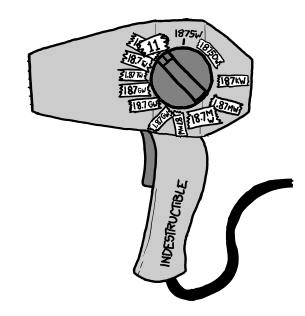 This one goes to 11. Petawatts, in this case.

The official record for fastest manmade object is the Helios 2 probe, which reached about 70 km/s in a close swing around the Sun. But it’s possible the actual holder of that title is a two-ton metal manhole cover.

The cover sat atop a shaft at an underground nuclear test site operated by Los Alamos as part of Operation Plumbbob. When the one-kiloton nuke went off below, the facility effectively became a nuclear potato cannon, giving the cap a gigantic kick. A high-speed camera trained on the lid caught only one frame of it moving upward before it vanished—which means it was moving at a minimum of 66 km/s. The cap was never found.

66 km/s is about six times escape velocity, but contrary to the linked blog’s speculation, it’s unlikely the cap ever reached space. Newton’s impact depth approximation suggests that it was either destroyed completely by impact with the air or slowed and fell back to Earth.

Our suddenly-activated hair dryer box, bobbing in lake water, undergoes a similar process. The heated steam below it expands outward, and as the box rises into the air, the entire surface of the lake turns to steam. The steam, heated to a plasma by the flood of radiation, accelerates the box faster and faster.

Rather than slam into the atmosphere like the manhole cover, the flood of radiation heats the air around it, creating a bubble of expanding plasma which offers little resistance. The box exits the atmosphere and continues away, slowly fading from second sun to dim star. Much of the Northwest Territories is burning, but the Earth has survived.

Although we may wish we hadn't. 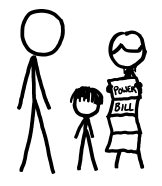