What if you somehow managed to make a stereo travel at twice the speed of sound, would it sound backwards to someone who was just casually sitting somewhere as it flies by?

Technically, anyway. It would be pretty hard to hear. 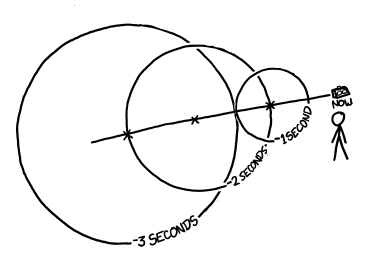 The problem is that the stereo is moving at Mach 2, which means that two seconds ago, it was over a kilometer away. It’s hard to hear music from that distance, particularly when your ears were just hit by (a) a sonic boom, and (b) pieces of a rapidly disintegrating stereo.

Wind speeds of Mach 2 would messily disassemble most consumer electronics. The force of the wind on the body of the stereo is roughly comparable to that of a dozen people standing on it: 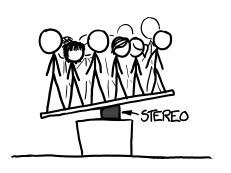 An ordinary stereo wouldn’t make it, but one with some kind of ruggedized high-strength casing might be able to survive.

If we put together a durable, heavy-duty stereo and launch it on a ballistic trajectory, it will only be traveling at supersonic speeds for the first 150 meters or so. This means that the target will hear a maximum of about a third of a second of reversed music.

This phenomenon is actually confirmed in the 2008 paper Reproduction of Virtual Sound Sources Moving at Supersonic Speeds in Wave Field Synthesis, which says that the sound wave field “contains a component carrying a time-reversed version of the source’s input signal”.

The sonic boom would be the first thing the target would hear. It would be followed by several sounds played over one another, including both reversed music (rising slightly in pitch as it fades out) and forward-playing music (which would play at half speed and an octave too low), followed by the crash of a stereo demolishing your neighbor’s shed.

Which means that if you’re playing one of those albums containing secret demonic messages, the result will be the strangest listening experience of your life: