A Mole of Moles

What would happen if you were to gather a mole (unit of measurement) of moles (the small furry critter) in one place?

Things get a bit gruesome.

"One mole" is close to the number of atoms in a gram of hydrogen. It’s also, by chance, a decent ballpark guess for the number of grains of sand on Earth.

A mole is also a type of burrowing mammal. There are a handful of types of moles, and some of them are truly horrifying.

First, let’s start with wild ballpark approximations. This is an example of what might go through my head before I even pick up a calculator, when I’m just trying to get a sense of the quantities - the kind of calculation where 10, 1, and 0.1 are all close enough that we can consider them equal:

… if anyone asks, I did not tell you it was ok to do math like this.

That’s enough to tell us that we’re talking about pile of moles on the scale of planets. It’s a pretty rough estimate, though, since it could be off by a factor of thousands in either direction.

Let’s get some better numbers.

An eastern mole (Scalopus aquaticus) weighs about 75 grams, which means a mole of moles weighs

That’s a little over half the mass of our moon.

If these moles were released onto the Earth’s surface, they’d fill it up to 80 kilometers deep—just about to the (former) edge of space: 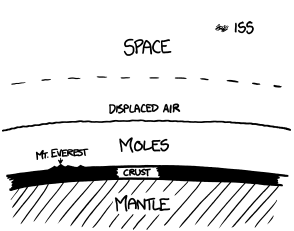 This smothering ocean of high-pressure meat would wipe out most life on the planet, which could—to reddit’s horror—threaten the integrity of the DNS system. So doing this on Earth is definitely not an option.

Instead, let’s gather the moles in interplanetary space. Gravitational attraction would pull them into a sphere. Meat doesn’t compress very well, so it would only undergo a little bit of gravitational contraction, and we’d end up with a mole planet a bit larger than the moon. 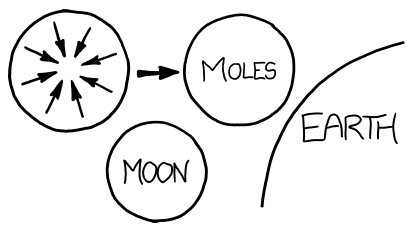 The moles would have a surface gravity about one-sixteenth as strong as Earth’s—similar to that of Pluto. The planet would start off uniformly lukewarm—probably a bit over room temperature—and the gravitational contraction would heat the deep interior by a handful of degrees.

But this is where it gets weird.

The mole planet is now a giant sphere of meat. It has a lot of latent energy (there are enough calories in the mole planet to support the Earth’s current population for 30 billion years). Normally, when organic matter decomposes, it releases much of that energy as heat. But throughout the majority of the planet’s interior, the pressure is over a hundred megapascals, which is enough to kill all bacteria and sterilize the mole remains—leaving no microorganisms to break down the mole tissues.

Closer to the surface, where the pressure is lower, there’s another obstacle to decomposition—the interior of a mole planet is low in oxygen. Without oxygen, the usual decomposition doesn’t happen, and the only bacteria that can break down the moles are those which don’t require oxygen. While inefficient, this anaerobic decomposition can unlock quite a bit of heat. If continued unchecked, it would heat the planet to a boil.

But the decomposition is self-limiting. Few bacteria can survive at temperatures above about 60 °C, so as the temperature goes up, the bacteria die off, and the decomposition slows. Throughout the planet, the mole bodies gradually break down into kerogen, a mush of organic matter which would—if the planet were hotter—eventually form oil.

The outer surface of the planet radiates heat into space and freezes. Because the moles form a literal fur coat, when frozen it insulates the interior of the planet and slows the loss of heat to space. However, the flow of heat in the liquid interior is dominated by convection. Plumes of hot meat and bubbles of trapped gases like methane—along with the air from the lungs of the deceased moles—periodically rise through the mole crust and erupt volcanically from the surface, a geyser of death blasting mole bodies free of the planet.

Eventually, after centuries or millennia of turmoil, the planet calms and cools enough that it begins to freeze all the way through. The deep interior is under such high pressure that as it cools, the water crystallizes out into exotic forms of ice such as ice III and ice V, and eventually ice II and ice IX (no relation).

All told, this is a pretty bleak picture. Let’s try an alternate approach.

I don’t have any reliable numbers for global mole population (or small mammal biomass in general), but we’ll take a shot in the dark and estimate that there are at least a few dozen mice, rats, voles, and other small mammals for every human.

There might be a billion habitable planets in our galaxy. If we colonized them, we’d certainly bring mice and rats with us. If just one in a hundred were populated with small mammals in numbers similar to Earth’s, after a few million years—not long, in evolutionary time—the total number which have ever lived would surpass Avogadro’s number.

If you want a mole of moles, build a spaceship.