Could a high-speed train run through a vertical loop, like a rollercoaster, with the passengers staying comfortable?

Since this is kind of a disappointing answer, I tried relaxing the requirements a little.

Could a high-speed train run through a vertical loop, like a rollercoaster, with the passengers staying comfortable surviving?

Could a modified and reinforced high-speed train with a jet engine on top run through a vertical loop, like a rollercoaster, with the passengers staying comfortable surviving?

The Norwegian aluminium and energy company Norsk Hydro ran a pro-education ad in which a bunch of kids build a giant roller-coaster loop on a train track as a prank. This is, of course, unrealistic, but not just for the obvious reasons. There are some problems with the whole idea of sending high-speed trains through loops.

The first issue is geometry. The biggest vertical loop which a train could conceivably go around has a radius of about 200 meters. If it’s any bigger than that, even the fastest trains will fail to complete the loop.

Unfortunately, a 200 meter loop is much too tight. Most high-speed trains are limited to vertical curves with radii no shorter than 20 kilometers. 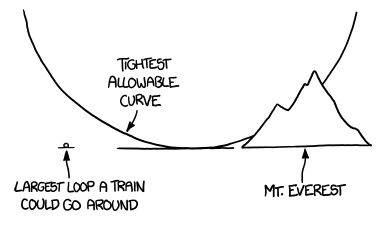 The reason for those limits isn't that trains aren't bendy enough. It's how fast they're going.

The spec sheet for the Bombardier ZEFIRO, for example, says it can handle a pretty tight vertical curve radius—just 900 meters. At the train’s top speed, that curve would create about two gees of acceleration. This might be survivable (for the passengers, at least, if not the train), but it would certainly not be comfortable.

Yet a 900 meter radius loop is still too big. Even with the engine at full power, the train wouldn’t even be able to get a quarter of the way around the loop before sliding back down.

The CGI train in the Norwegian video is an Di 4, which is shown moving about twice as fast as it can actually go. Based on its speed and number of cars, the loop appears to have a radius of about 70 meters, which is part of why it’s shown going so fast—the actual Di 4 would be just a little too slow, and would fall off the track at the top. The digital one, however, makes it around the loop in about five seconds, no problem.

But the tight loop means the passengers and train are experiencing between 9 and 15 gees. This is at the limit of what fighter pilots can handle in pressure suits. In addition to killing everyone on board, it would certainly destroy the train, to say nothing of the track. 70 meters is much too tight.

Clearly, we need a larger loop. 900 meters would be great, but our trains aren’t fast enough for that.\

But maybe we could make the train go faster ...

A 747 engine mounted atop a bullet train would probably add about 35% to its speed. Is that enough to do a 900-meter loop?

Ok, putting the jet engine on top didn’t work. Maybe we should try something different. 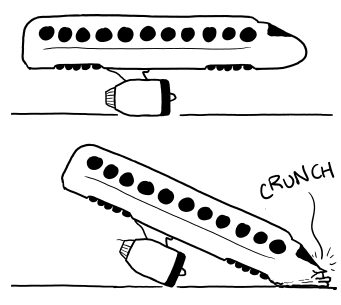 ... why did we think that would work? Forget that idea.

Clearly, we need some combination of a fast train and a medium-sized loop. The sweet spot for loop size and shape is probably something like this:

Of course, given the height, we’d probably have to build it into a small mountain: 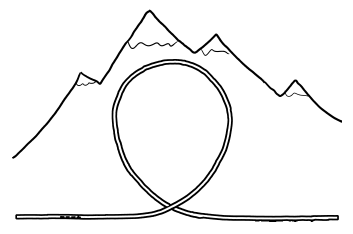 The shape of the loop, which is common in roller coasters, would spread out the g-forces more evenly, resulting in a max of only a few gees—totally survivable!

Of course, the construction costs would be astronomical, and it goes without saying that no group of kids could pull it off alone without the resources of a major government.

To any Norwegian kids reading this who were hoping to build a train loop, don't despair—there may still be a way to make this happen.

The US Vice President, Joe Biden, served in the US Senate for 36 years. In all that time, he never moved to Washington, DC. Instead, every night, he took the train home to Delaware to see his family. This is very touching, but after the first few years, I'm sure the commute got a little dull.

So, if you’re looking for a high-level backer to help you make someone’s train ride a little more exciting, you might just try talking to Joe. 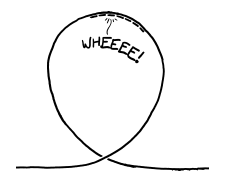