A good, professional-quality bowling ball is smoother than the Earth.

Fortunately for us, there are people who digitally scan bowling ball surfaces. 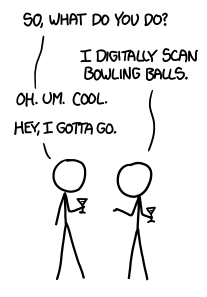 These scans (along with various measurements of ball roughness[1] tell us that a high-end bowling ball is quite smooth. If blown up to the scale of the Earth, the ridges and bumps[2] would be between 10 and 200 meters high, and the peaks would be between one and three kilometers apart:

By Earth standards, this is quite smooth; our highest mountains are 40 times higher.

What would this bowling ball world (we’ll call it “Lebowski”) be like?

For starters, bowling balls are a lot less dense than rock, so Lebowski’s surface gravity would be a quarter the strength of Earth’s:

It would also (at first) have no atmosphere. 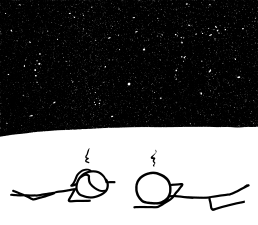 The Earth’s core is hot for two reasons: It’s still glowing from the heat of all the dust collapsing together when it formed, and it’s full of radioactive metals. Lebowski wouldn’t have either of these, so its core would start out cold.

The holes would be far too big to hold themselves open against gravity; On that scale, the polymers in the bowling ball would behave more like a liquid. In the space of about half an hour, the holes would undergo a slow-motion collapse.

As they collapsed, the material around the holes would heat to a glow. At the center of the hole, a white-hot jet of charred hydrocarbons would fountain outward into space.

When it was over, Lebowski would be left with massive scars, each marking the location where an abyss collapsed to form a molten sea. 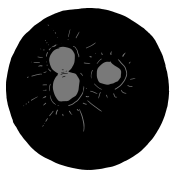 And now, thanks to this question, whenever I look at the Moon, I’ll notice the Sea of Tranquility, the Sea of Serenity, and the Sea of Crisis, and I’ll think: Finger holes.