If you call a random phone number and say “God bless you”, what are the chances that the person who answers just sneezed? On average, not just in spring or fall.

Before you pick up the phone, you should also keep in mind that there's roughly a 1 in 1,000,000,000 chance that the person you're calling just murdered someone.[1]Based on a murder rate of 4 per 100,000, the average in the US but on the high end for industrialized countries. You may want to be careful when you hand out blessings.

However, given that sneezes are far more common than murders,[2]Citation: You are alive. you're still much more likely to get someone who sneezed than to catch a killer, so this strategy is not recommended:

Compared with the murder rate, the sneezing rate doesn't get much scholarly research. The most widely-cited figure for average sneeze frequency comes from a doctor interviewed by ABC News, who pegged it at 200 sneezes per person per year.[3]Cari Nierenberg, The Perils of Sneezing, ABC News, Dec. 22, 2008

One of the few scholarly sources of data is a study which monitored the sneezing of people undergoing an induced allergic reaction.[4]Werner E. Bischoff, Michelle L. Wallis, Brian K. Tucker, Beth A. Reboussin, Michael A. Pfaller, Frederick G. Hayden, and Robert J. Sherertz, “Gesundheit!” Sneezing, Common Colds, Allergies, and Staphylococcus aureus Dispersion, J Infect Dis. (2006) 194 (8): 1119-1126 doi:10.1086/507908 To estimate the average sneezing rate, we can ignore all the real medical data they were trying to gather and just look at their control group. This group was given no allergens at all; they just sat alone in a room for a total of 176 20-minute sessions.[5]For context, that's 490 repititions of the song Hey Jude.

The subjects in the control group sneezed four times during those 58 or so hours,[6]Over 58 hours of research, four sneezes were the most interesting data points. I might've taken the 490 Hey Judes. which—assuming they only sneeze while awake—translates to about 400 sneezes per person per year.

Google Scholar turns up 5,980 articles from 2012 that mention "sneezing".[7]Google Scholar search for "sneezing" If half of these articles are from the US, and each one has an average of four authors, then if you dial the number, there's about a 1 in 10,000,000 chance that you'll get someone who just that day published an article on sneezing.

On the other hand, about 60 people are killed by lightning in the US every year.[8]Lightning fatalities by country That means there's only a 1 in 10,000,000,000,000 chance that you'll call someone in the 30 seconds after they've been struck and killed. 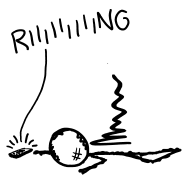 Lastly, let's suppose that, on the day this article was published, five people who read it decide to actually try this experiment. If they call numbers all day, there's about a 1 in 30,000 chance that at some point during the day, one of them will get a busy signal because the person they've called is, themselves, calling a random stranger to say "God bless you." 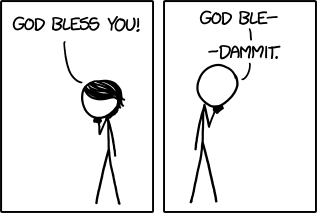 At this point, probability will give up, and they'll both be struck by lightning.