If you wanted to anchor an airplane into the ground so it wouldn't be able to take off, what would the rope have to be made out of?

Ah, the Just Cause 2 scenario.

At takeoff, a 747's four engines can each generate 281.57 kN of thrust. I have no real sense for what that number means, so let's put it in different terms:

A 747 with all engines at full could roughly balance the weight of a dangling blue whale.

With all that weight, how thick would the cable need to be?

Surprisingly, not all that thick! A cable a little over an inch in diameter would do it.[1]Bethlehem Wire Rope General Purpose Catalog

Let's suppose you don't have a cable lying around. What else could you use?

If you're into fishing, you might have some fishing line. A typical line for saltwater fishing might have a 50-100 lb strength,[2]West Marine: Selecting Fishing Line so it would take a brigade of several thousand people armed with fishing rods to restrain the plane.

If you don't have fishing line, there's one thing you probably do have: Hair.

While hair isn't as strong as steel, it's just about the strongest material in your body,[3]Examples of the Tensile Strength of Materials with a tensile strength rivaling or exceeding that of bone.[4]Properties of Textile Fibers

Based on these hair strength figures, a piece of hair three inches in diameter would be strong enough to restrain a 747.[5]If you wanted to measure the strength of a strand of hair, you could use the device described by US Patent #4628742A, "Tensile strength tester for hair"

Hairs that big around are hard to come by.[6]... I hope. Since most of us have many small hairs, instead of one big hair ... 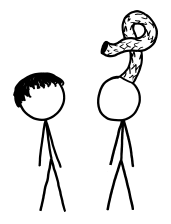 ... we'd need to get a lot of hairs and bundle them together. Given that individual hairs can support about 50 grams of weight, we'd need roughly 20 heads of hair to restrain the aircraft.

Conclusion: Restraining a plane with a cable would be pretty easy.

Further conclusion: Blue whales are not typically covered in hair,[8]Although they are mammals, most whales do not have coats of hair like land mammals typically do but if we transplanted the hair from at least 20 human heads onto a blue whale ... 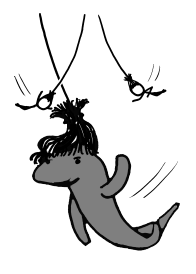 ... it would have enough hair to perform acrobatics at a circus.