What if a huge mountain—Denali, say—had the bottom inch of its base disappear? What would happen from the impact of the mountain falling 1 inch? What about 1 foot? What if the mountain's base were raised to the present height of the summit, and then the whole thing were allowed to drop to the earth?

The one-inch gap would take about 70 milliseconds to close. Don't stick your hand in. 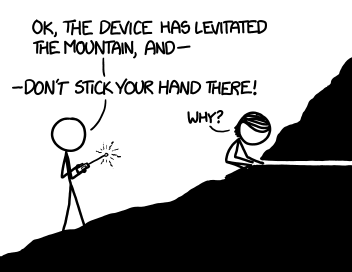 The impact could trigger an earthquake. Denali (also known as Mount McKinley) is a mountain in Alaska that sits just to the south of a major fault line.[1]Roger A. Hansen, Earthquake and Seismic Monitoring in Denali National Park, National Park Service This fault is active,[2]Alaska Earthquake Information Center, M 7.9 Denali Fault earthquake of November 3, 2002 and we know that drilling can trigger earthquakes.[3]Van der elst NJ, Savage HM, Keranen KM, Abers GA. Enhanced remote earthquake triggering at fluid-injection sites in the midwestern United States. Science. 2013;341(6142):164-7. Earthquakes can happen at any time, so there's always a chance that dropping a mountain any distance could trigger one. So could kicking a tree. The only way to find out for sure would be to try it.[4]This article has an awful lot of citations.

Assuming it didn't trigger an earthquake, the impact wouldn't be all that dramatic. If you were standing on the mountain when it happened, you'd definitely feel a jolt, but it probably wouldn't even be enough to knock you down. 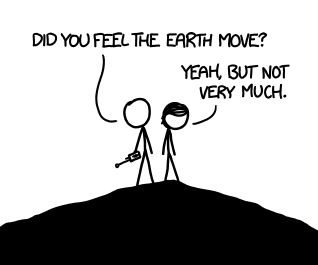 When the mountain hit the ground, the rock under it would be damaged, but only a little. The granite base is strong enough to hold up under the tremendous resting weight of a mountain;[5]Citation: The rock was holding up a mountain when you got there. the shockwave from dropping it an inch doesn't add too much pressure on top of that, and the rock would survive with a little minor cracking.

People nearby would definitely feel the impact, and probably hear it; the sound would likely resemble the crack of a lightning strike (if you were standing near the mountain) fading into a long, deep rumble.[6]Citation: A dream I had once. The vibration would be equivalent to that of a 3.5-magnitude earthquake[7]For more on the specific seismic details, see Stein, Seth, and Michael Wysession. "Earthquakes." An Introduction to Seismology, Earthquakes, and Earth Structure. Malden, MA: Blackwell Pub., 2003. 241. Print.; at worst, it would knock a few pictures off the wall if you happened to be living next to the mountain. Frankly, I'd be more worried about debris flying out of the gap.[8]If your magical mountain-cutter put air in the space where the rock used to be, you should avoid standing near the crack when it falls. The air will come jetting out from the closing crack, spraying rocks and dust at speeds approaching, or even—thanks to some fun heat-related effects—exceeding, Mach 1.

Dropping from a height of one foot wouldn't be all that different. 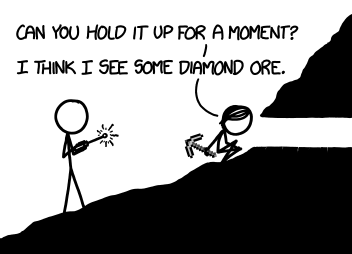 The mountain would hit the ground at 2.5 m/s, or roughly walking speed. The shockwave from that impact would be in the range of 50 megapascals of pressure,[9]You can calculate the peak pressure of the compressive strain wave in the rock using the Joukowsky equation, which says that the peak pressure of the compressive wave in a material is (material's density)x(speed at impact)x(the speed of sound in the material). This equation is is normally used in fluid mechanics, but it works fine here, too! which granite can handle without too much trouble.[10]Bhat HS, Sammis CG, Rosakis AJ. The Micromechanics of Westerley Granite at Large Compressive Loads. Pure Appl. Geophys. 2011;168(12):2181-2198. [11]"... for a plane shock wave ... granite will stand a compressive stress of 3000-4000 MPa elastically before failing." Persson, Per-Anders, Roger Holmberg, and Jaimin Lee. Rock Blasting and Explosives Engineering. Boca Raton, FL: CRC, 1994. 5-6. Print.

Ok. Let's jump straight to the end of John-Clark's question: 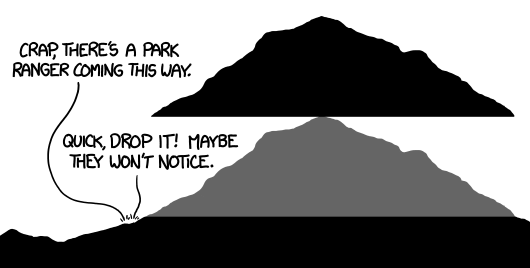 After falling from summit height to base height—about 5 kilometers—the mountain would be moving at roughly the speed of sound.

The last two impacts were pretty minor. This one wouldn't be. The jolt to the ground would be as violent as in a magnitude 7 earthquake.[12]In addition, there's a good chance that a shock this large will release some existing seismic energy; see: U.S. Congress, Office of Technology Assessment, Seismic Verification of Nuclear Testing Treaties, P. 715, OTA-ISC-361 (Washington, DC: U.S. Government Printing Office, May 1988). There wouldn't exactly be a crater, but the mountain would definitely not be shaped like it used to be. The pressure from the impact would be high enough to produce some unusual geologic strutures. If you put a lump of coal under the meteor, the impact would be enough to convert it to diamond (and, unfortunately, smash it to bits).[13]French B. M. (1998) Traces of Catastrophe: A Handbook of Shock-Metamorphic Effects in Terrestrial Meteorite Impact Structures., Chapter 4, LPI Contribution No. 954,Lunar and Planetary Institute, Houston. 120 pp

The good news is that, the last time a magnitude 7+ earthquake hit Denali, no one was killed.[2]Alaska Earthquake Information Center, M 7.9 Denali Fault earthquake of November 3, 2002 Let's just hope nobody is on the mountain itself when we do this.

We'd need to lift the mountain out of the atmosphere, out past the orbit of the GPS satellites, to the very outer limits of the Earth's gravity well. Then we let go. 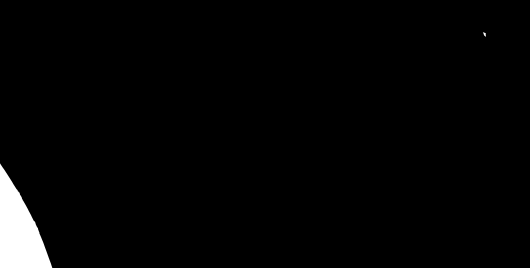 It would hit Alaska at 10 kilometers per second.

The Last Frontier would not fare well. A 50-mile-wide crater would have obliterated Denali National Park. Anchorage would be buried under three meters of gravel.[14]Purdue University ImpactEarth asteroid impact simulator The shaking, combined with the debris falling into the ocean, would cause tsunamis across the Pacific. Across North America, the ground would tremble. A wind would sweep in from the northwest. The sky would darken.

In 1815, Mount Tambora erupted in the largest volcanic event in recorded history. The resulting global veil of aerosols made 1816 the "year without a summer". Snow fell in Massachusetts in June, ice formed on rivers in Pennsylvania in August, and frost killed most of the spring crops. The cooling effects lingered for several years.

The Alaska impact would be far worse. Over the next few months, the skies around the globe fill with dust. Summer is canceled and winter arrives. Global temperatures would drop by 5 to 20 degrees Celsius and stay that way for a year or more.[15]Covey, C, S Thompson, P Weissman, and M Maccracken. "Global Climatic Effects Of Atmospheric Dust From An Asteroid Or Comet Impact On Earth." Global and Planetary Change 9, no. 3-4 (1994): 263-273.

On the plus side, we would not be engulfed in a global firestorm. When the Chicxulub comet hit the Yucatan peninsula 65 million years ago, it blasted molten debris into space. This debris fell back to Earth around the world, heating the atmosphere and igniting global firestorms. These may have played a role in the mass extinctions.[16]I don't have a citation for this. But, c'mon, it's a 'global firestorm'. Can you really imagine that every species made it through unscathed?

However, our mountain would carry only about 10% of the energy of the Chicxulub impactor, which means that it wouldn't be capable of igniting global firestorms.[17]Osinski, G. R., and E. Pierazzo. "Environmental Effects of Impact Events." In Impact Cratering Processes and Products.. Chicester: Wiley, 2012. 151. The firestorms would, in fact, only cover some of North America. So that's a relief.

The northern hemisphere would be covered in ice, but our species would probably manage to limp through. Civilization, on the other hand, might well collapse. A total collapse of modern civilization would be a serious blow to the already sluggish economy, and the economic damage could amount to $80 trillion per year (the total value of all human goods and services). All in all, it would have serious implications for the upcoming elections.

And that's that. We've dropped the mountain from as high as it can be dropped, and I hope John-Clark is proud of the resulting devastation. Thanks for reading, and—

Dropping it from higher up won't do anything; there won't be enough force pulling it toward the— 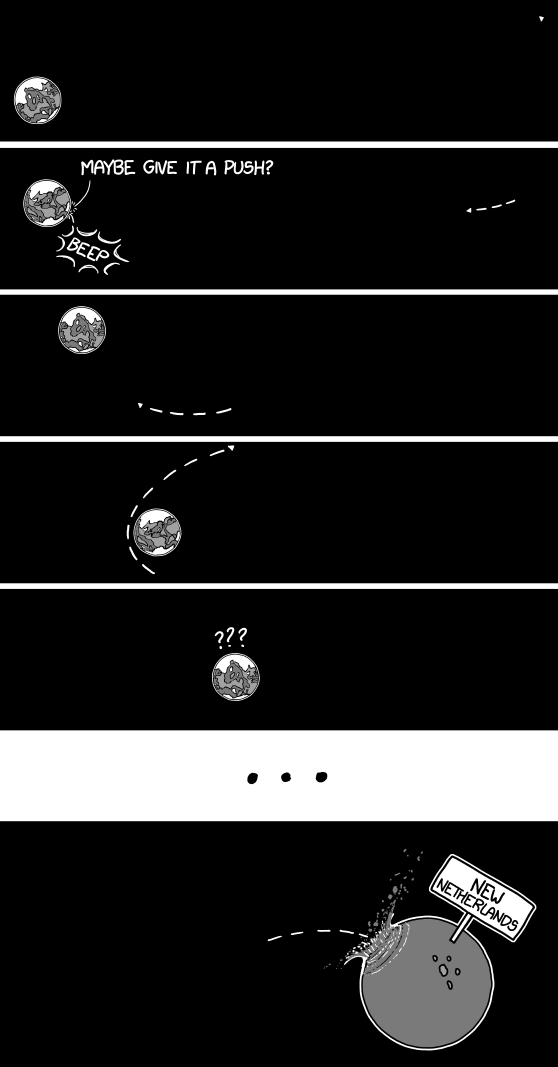