How fast can you hit a speed bump while driving and live?

First, a disclaimer: After reading this article, don't try to drive over speed bumps at high speeds. Here are some reasons:

• You could hit and kill someone.
• It can destroy your tires, suspension, and potentially your entire car.
• Have you read any of the other articles on this blog?

If that's not enough, here are some quotes from medical journals on spinal injury from speed bumps:

Examination of the thoracolumbar X-ray and computed tomography displayed compression fractures in four patients ... Posterior instrumentation was applied ... All patients recovered well except for the one with cervical fracture.[1]Speed bump–induced spinal column injury

Incorporation of the buttocks with realistic properties diminished the first vertical natural frequency from ~12 to 5.5 Hz, in agreement with the literature.[3]Source: The 2nd American Conference on Human Vibration.

(That last one isn't directly related to speed bump injuries, but I wanted to include it anyway.)

Speed bumps are designed to make drivers to slow down. Going over a typical speed bump at 5 miles per hour[4]Like anyone with a physics background, I do all my calculations in SI units, but I've gotten too many US speeding tickets to write this article in anything but miles per hour; it's just been burned into my brain. Sorry! results in a gentle bounce, while hitting one at 20 delivers a sizable jolt. It's natural to assume that hitting a speed bump at 60 would deliver a proportionally larger jolt, but it probably wouldn't.

As those quotes attest, it's true that people are occasionally injured by speed bumps. However, nearly all of those injuries happen to a very specific category of people: Those sitting in hard seats in the backs of buses, riding on poorly-maintained roads.

When you're driving a car, the two main things protecting you from bumps in the road are the tires and the suspension. No matter how fast you hit a speed bump, unless the bump is particularly large, enough of the jolt will be absorbed by these two systems that you probably won't be hurt.

Absorbing the shock won't necessarily be good for those systems. In the case of the tires, they may absorb it by exploding.[5]Citation: Just Google "hit a curb at 60". If the bump is large enough, it may permanently damage a lot of important parts of the car.

The typical speed bump is between three and four inches tall. That's also about how thick an average tire's cushion is (the separation between the bottom of the rims and the ground).[6]Citation: There are cars everywhere. Go outside with a ruler and check. This means that if a car hits a small speed bump, the rim won't actually touch the bump; the tire will just be compressed.

The typical sedan has a top speed of around 120 miles per hour. Hitting a speed bump at that speed would, in one way or another, probably result in losing control of the car and crashing.[7]At high speeds, you can easily lose control even without hitting a bump. Joey Huneycutt's 220 mph crash left his Camaro a burned-out hulk. However, the jolt itself probably wouldn't be fatal.

If you hit a larger speed bump—like a speed hump or speed table—your car might not fare so well.[8]Youtube: Speed bump in Dubai + flying Gallardo

How fast would you have to go to definitely die?

Let's consider what would happen if a car went were going faster than its top speed.

The average modern car is limited to a top speed of around 120 mph, and the fastest can go about 200.[9]The Bentley Continental Flying Spur has a top speed of 199.64 miles per hour.

While most passenger cars have some kind of artificial speed limits imposed by the engine computer, the ultimate physical limit to a car's top speed comes from air resistance. This type of drag increases up with the square of speed; at some point, a car doesn't have enough engine power to push through the air any faster.

If you did force a sedan to go faster than its top speed—perhaps by re-using the magical accelerator from the relativistic baseball—the speed bump would be the least of your problems.

Cars generate lift. The air flowing around a car exerts all kinds of forces on it. 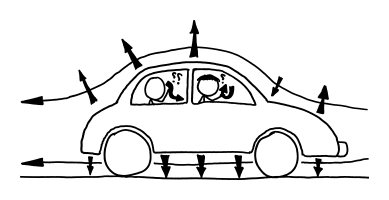 The lift forces are relatively minor at normal highway speeds, but at higher speeds they become substantial.

In a Formula One car equipped with airfoils, this force pushes downward, holding the car against the track. In a sedan, they lift it up.[10]Parker, Barry R.. "Aerodynamic Design." In The Isaac Newton school of driving: physics and your car. Baltimore, MD: Johns Hopkins University Press, 2003. 155.

Among NASCAR fans, there's frequently talk of a 200-mph "liftoff speed" if the car starts to spin.[11]The Myth of the 200-mph "Lift-Off Speed" Other branches of auto racing have seen spectacular[12]Youtube: Porsche 911 GT2 (or GT1) crash backflip crashes[13]Youtube: Mercedes CLR-GTR Le Mans Flip when the aerodynamics don't work out as planned.

The bottom line is that at somewhere in the range of 150-300 mph, a typical sedan will lift off the ground, tumble, and crash ... before you even hit the speed bump.

If you kept the car from taking off, the force of the wind at those speeds would strip away the the hood, side panels, and windows. At higher speeds, the car itself would be disassembled, or even burn up like a spacecraft reentering the atmosphere.

In the state of Pennsylvania, drivers may have $2 added to their speeding ticket for every mile per hour by which they break the speed limit.[14]NHTSA, Summary of State Speed Laws, 2007

Therefore, if you drove a car over a Philadelphia speed bump at 90% of the speed of light, in addition to destroying the city ... 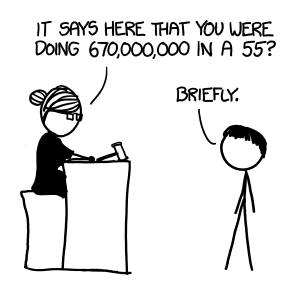