What if I jumped out of an airplane with a couple of tanks of helium and one huge, un-inflated balloon? Then, while falling, I release the helium and fill the balloon. How long of a fall would I need in order for the balloon to slow me enough that I could land safely?

Falling from great heights is dangerous.[citation needed] A balloon could actually help save you, although a regular helium one from a party obviously won't do the trick. 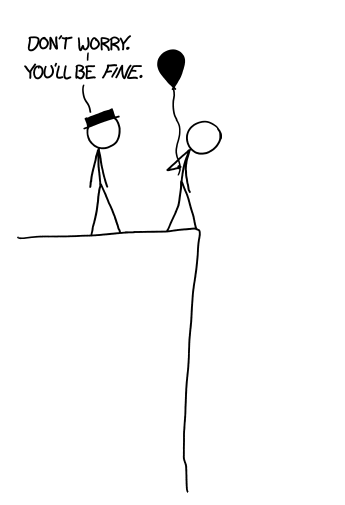 If the balloon is large enough, you don't even need the helium. A balloon will act as a parachute, slowing your fall to non-fatal speeds.

Avoiding a high-speed landing is, unsurprisingly, the key to survival. As one medical paper[1]De Haven H. Mechanical analysis of survival in falls from heights of fifty to one hundred and fifty feet. Injury Prevention. 6(1):62-b-68. put it,

It is, of course, obvious that speed, or height of fall, is not in itself injurious ... but a high rate of change of velocity, such as occurs after a 10 story fall onto concrete, is another matter.

... which is just a wordy version of the old saying, "It's not the fall that kills you, it's the sudden stop at the end."

To act as a parachute, a balloon filled with air, rather than helium, would have to be 10 to 20 meters across—far too big to be inflated with portable tanks. A powerful fan could be used to fill it with ambient air, but at that point, you may as well just use a parachute.

It doesn't take too many helium balloons to lift a person. In 1982, Larry Walters flew across Los Angeles in a lawn chair lifted by weather balloons, eventually reaching several miles in altitude. After passing through LAX airspace, he descended by shooting some of the balloons with a pellet gun.

On landing, Walters was arrested, although the authorities had some trouble figuring out what to charge him with. At the time, an FAA safety inspector told the New York Times, "We know he broke some part of the Federal Aviation Act, and as soon as we decide which part it is, some type of charge will be filed."[2]ARMCHAIR AIRMAN SAYS FLIGHT FULFILLED HIS LIFELONG DREAM, New York Times, July 4, 1982

A relatively small helium balloon—certainly smaller than a parachute—will suffice slow your fall, but it still has to be huge by party balloon standards. The biggest consumer rental helium tanks are about 250 cubic feet, and you'd need to empty at least 10 of them to put enough air in the balloon to support your weight.

You'd have to do it quickly. The compressed helium cylinders are smooth and often quite heavy, which means they have a high terminal velocity. You'll only have a few minutes to use up all the cylinders. (As soon as you emptied one, you could drop it.)

You can't get around this problem by moving your starting point higher. Since the upper atmosphere is pretty thin, anything dropped from the stratosphere up will accelerate to very high speeds until it hits the lower atmosphere, then fall slowly the rest of the way. This is true of everything from small meteors[3]By the time meteors hit the Earth, they have slowed down to a few hundred miles per hour. to Felix Baumgartner.[4]Jason Martinez, Falling Faster than the Speed of Sound, Wolfram Blog, October 24, 2012 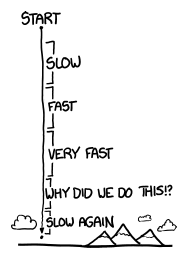 But if you inflated the balloons quickly, possibly by connecting many canisters to it at once, you'd be able to slow your fall. Just don't use too much helium, or you'll end up floating at 16,000 feet like Larry Walters.

While researching this article,[5]Additionally, while researching impact speeds for this article, I came across a discussion on the Straight Dope Message Boards about survivable fall heights. One poster compared a fall from height to being hit by a bus. Another user, a medical examiner, replied that this was a bad comparison:

"When hit by a car, the vast majority of people are not run over; they are run under. The lower legs break, sending them into the air. They usually strike the hood of the car, often with the back of the head impacting the windshield, "starring" the windshield, possibly leaving a few hairs in the glass. They then go over the top of the car. They are still alive, although with broken legs, and maybe with head pain from the nonfatal windshield impact. They die when they hit the ground. They die from head injury."

The lesson: Don't mess with medical examiners. They're apparently pretty hardcore. I managed to lock up my copy of Mathematica several times on balloon-related differential equations, and subsequently got my IP address banned from Wolfram|Alpha for making too many requests. The ban-appeal form asked me to explain what task I was performing that necessitated so many queries, so this is what I put: 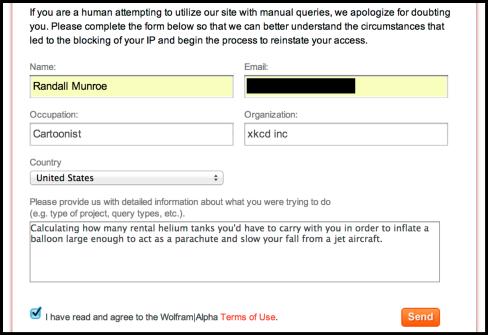 I hope they understand.