If you suddenly began rising steadily at one foot per second, how exactly would you die? Would you freeze or suffocate first? Or something else?

Did you bring a coat?

A foot per second isn't that fast—it's substantially slower than a typical elevator.[1]Otis: About Elevators It would take you 5-7 seconds to rise out of arms' reach, depending how tall your friends are. 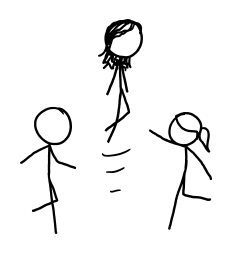 After 30 seconds, you'd be 30 feet—9 meters—off the ground. Judging from What-If #44, this is getting close to your last chance for a friend to throw you a sandwich or water bottle or something.[2]Not that it will help, ultimately. 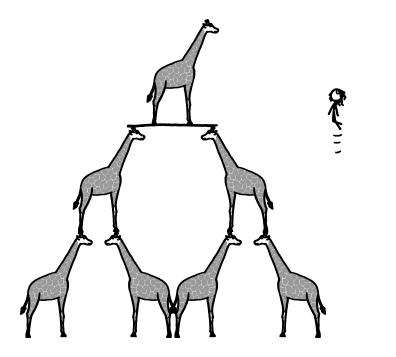 After a minute or two you would be above the trees. You'd still be about as comfortable as you were on the ground. If it's a breezy day, it will probably get chillier thanks to the steadier wind above the treeline.[3]For this article, I'm going to assume a typical atmosphere temperature profile. It can, of course, vary quite a bit.

After 10 minutes you would be above all but the tallest skyscrapers, and after 25 minutes you'd pass the spire of the Empire State Building. 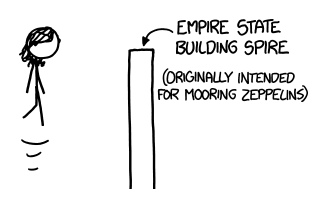 The air at these heights is about 3% thinner than it is at the surface. Fortunately, your body handles air pressure changes like that all the time. Your ears may pop, but you wouldn't really notice anything else.

Air pressure changes quickly with height. Surprisingly, when you're standing on the ground, air pressure is even measurably lower at your head than at your feet. If your phone has a barometer in it, as a lot of new Android phones do, you can download an app and actually see the pressure difference between your head and your feet.

A foot per second is pretty close to a kilometer per hour, so after an hour, you'll be about a kilometer off the ground. At this point, you definitely start to get chilly. If you have a coat, you'll still be ok, though you might also notice the wind picking up.

At about two hours and two kilometers, the temperature would drop below freezing. The wind would also, most likely, be picking up. If you have any exposed skin, this is where frostbite starts to become a concern.[4]National Weather Service: Wind Chill Temperature Index

Starting at this point, the air pressure would drop below what you'd experience in an airliner cabin,[5]... which are typically kept pressurized at about 70%-80% of sea level pressure, judging from the barometer in my phone. and the effects would start to become more significant, but unless you had a warm coat, the temperature would be a bigger problem.

Over the next two hours, the air would drop to below-zero[6]Either unit.​[7]Not Kelvin, though. temperatures. Assuming for a moment that you survived the oxygen deprivation, at some point you'd freeze to death. But when?

The scholarly authorities on freezing to death seem to be, unsurprisingly, Canadians. The most widely-used model for human survival in cold air was developed by Peter Tikuisis and John Frim for the Defence and Civil Institute of Environmental Medicine in Ontario.[8]Prediction of Survival Time in Cold Air—see page 24 for the relevant tables.

According to their model, the main factor in the cause of death would be your clothes. If you were nude, you'd probably succumb to hypothermia somewhere around the five hour mark, before your oxygen ran out.[9]And frankly, this really raises more questions than it answers. If you were bundled up, you may be frostbitten, but you would probably survive ...

Above 8,000 meters—above the tops of all but the highest mountains—the oxygen content in the air is too low to support human life. Near this zone, you would experience a range of symptoms, possibly including confusion, dizziness, clumsiness, impaired vision, and nausea.

As you approach the Death Zone, your blood oxygen content would plummet. Your veins are supposed to bring low-oxygen blood back to your lungs to be refilled with oxygen. But in the Death Zone, there's so little oxygen in the air that your veins lose oxygen to the air instead of gaining it.[10]Linda D. Pendleton, When Humans Fly High: What Pilots Should Know About High-Altitude Physiology, Hypoxia, and Rapid Decompression

The result would be a rapid loss of consciousness and death. This would happen around the seven hour mark; the chances are very slim that you would make it to eight.

And two million years later, your frozen body, still moving along steadily at a foot per second, would pass through the heliopause into interstellar space—the same boundary that Voyager just crossed.[11]Again.

Clyde Tombaugh, the astronomer who discovered Pluto, died in 1997. A portion of his remains were placed on New Horizons spacecraft, which will fly past Pluto and then continue out of the Solar System.

It's true that your hypothetical foot-per-second trip would be cold, unpleasant, and rapidly fatal. But when the Sun becomes a red giant in four billion years and consumes the Earth, you and Clyde would be the only ones to escape.