If winds reached 500 mph, would it pick up a human?

Some things don't work like they do in the movies. Getting shot doesn't really make someone fly backward. The vacuum of space doesn't make your skin explode.

But high wind can definitely pick up a person. In fact, if you were standing in the parking lot, the wind wouldn't just pick you up—it would also peel the pavement from the ground!

It wouldn't be strong enough to peel your skin off. Humans can survive blasts of 500 mph wind, which is important because pilots sometimes need to eject from airplanes at those speeds.

In the 1940s, the US government put pilots in wind tunnels to learn how they reacted to high winds. Have you ever been curious what happens to a person's face in 457 mph winds? Well, you can watch a video of one of those wind tunnel tests here. (That test was conducted at NASA Langley Research Center, where I worked before I started drawing internet comics for a living.)

Luckily, he's strapped into that chair. He wouldn't be able to stand up in those winds! If he tried, he would go flying backward down the tunnel.

High wind is really powerful. In a paper in the journal Weather, J. F. R. McIlveen showed how to calculate the force of wind on the human body.[1]McIlveen, J. F. R.. "The Everyday Effects Of Wind Drag On People." Weather 57, no. 11 (2002): 410-413. The calculations on page 2 show how far you'd have to lean to stay upright in wind of various speeds.

When wind speed rises above about 120 mph, it's no longer possible to stay upright no matter how far you lean; you'll start to slide backward across the ground,[2]When Hurricane Isabel hit Virginia in 2003, I had the bright idea of standing on a skateboard with a poncho held up like a sail, so the wind would blow me down the street. But the moment I got the sail up, the wind fell quiet.

Later, I learned that people die from doing that. Oops. then quickly go head over heels and start to tumble.

You wouldn't necessarily be thrown very high. If the wind were perfectly level, you'd tumble along the surface, bouncing against the ground. However, if there were any updrafts, you could easily be lifted up and carried away.

The good news is that 500 mph winds are rare. The strongest hurricanes have wind speeds around 200 mph with gusts up to 250.[3]Courtney, J.; Buchan, S.; Cerveny, R.S.; Bessemoulin, P.; Peterson, T.C.; Rubiera Torres, J.M.; Beven, J.; King, J.; Trerwin, B.; Rancourt, K.. 2012 "Documentation and verification of the world extreme wind gust record: 113.3 m s–1 on Barrow Island, Australia, during passage of tropical cyclone Olivia." Australian Meterological and Oceanographic Journal, 62 (1). 1-9. Tornadoes can reach 300 mph.[4]It's difficult to get accurate measurements of surface winds since those tornadoes destroy most measuring equipment! 300 is a far cry from 500; the force from a 500 mph wind is several times stronger than the force from a 300 mph wind.

Another way to experience 500 mph winds is to trigger a hypercane.[6]Limits on Hurricane Intensity A hypercane is an exotic type of hurricane with 500 mph winds spinning in a very tight vortex just a few miles across.

Hypercanes can't exist on Earth right now. To form, they require ocean temperatures of about 50°C. No matter how much we warm the planet, we're not going to get the temperature that high any time soon.

When an asteroid or comet—coincidentally, one about the size of the recently-named 4942 Munroe—hit Mexico 65 million years ago, it punched a hole in the crust and left behind a sea of lava.[7]Christeson, Gail L., Gareth S. Collins, Joanna V. Morgan, Sean P.S. Gulick, Penny J. Barton, and Michael R. Warner. "Mantle Deformation Beneath The Chicxulub Impact Crater." Earth and Planetary Science Letters 284, no. 1-2 (2009): 249-257. When water flowed back in to fill the hole, it would have been heated by contact with the molten rock. This might have created the conditions for hypercanes to form, and one paper suggests that these storms could have lifted a large amount of dust and debris into the upper atmosphere—thus contributing to a global winter and extinction of the dinosaurs.[8]Emanuel, Kerry A., Kevin Speer, Richard Rotunno, Ramesh Srivastava, and Mario Molina. "Hypercanes: A Possible Link In Global Extinction Scenarios." Journal of Geophysical Research 100, no. D7 (1995): 13755-13765. 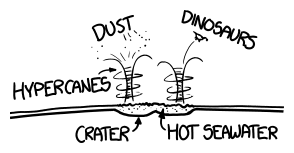 In short, the answer to Grey's question is yes—500 mph winds would send you flying through the air. But don't worry about that. Instead, worry about is the thing that created the 500 mph winds. Odds are, that's what's going to kill you. 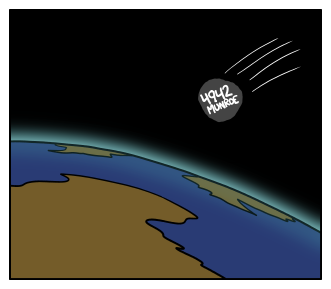