How long would it take for people to notice their weight gain if the mean radius of the world expanded by 1cm every second? (Assuming the average composition of rock were maintained.)

The Earth is not, currently, expanding.[1]Yes, I have a citation for this.

"In conclusion, no statistically significant present expansion rate is detected by our study within the current measurement uncertainty of 0.2 mm yr−1."

People have long suggested that it might be. Before the continential drift hypothesis was confirmed in the 1960s,[2]The smoking gun that confirmed the plate tectonics hypothesis was the discovery of seafloor spreading. The way seafloor spreading and magnetic pole reversal neatly confirmed each other is one of my favorite examples of scientific discovery at work. people had noticed that the continents fit together. Various ideas were put forward to explain this, including the idea that the ocean basins were rifts that opened in the surface of a previously-smooth Earth as it expanded. This theory was never very widespread,[3]It turns out it's kind of dumb. although it still periodically makes the rounds on YouTube.

To avoid the problem of rifts in the ground, let's imagine all the matter in the Earth, from the crust to the core, starts expanding uniformly. To avoid another Drain the Oceans scenario, we'll assume the ocean expands, too.[4]As it turns out, the ocean is expanding, since it's getting warmer. This is (currently) the main way global warming is raising the sea level. All human structures will stay. 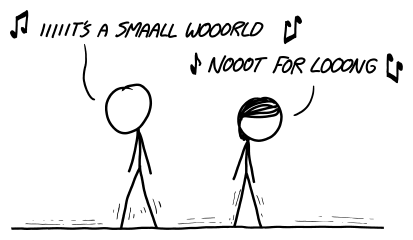 As the Earth started expanding, you'd feel a slight jolt, and might even lose your balance for a moment. This would be very brief. Since you're moving steadily upward at 1 cm/s, you woudn't feel any kind of ongoing acceleration. For the rest of the day, you wouldn't notice much of anything.

After the first day, the Earth would have expanded by 864 meters. 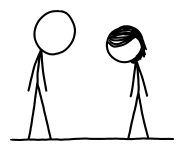 Gravity would take a long time to increase. If you weighed 70 kilograms when the expansion started, you'd weigh 70.01 at the end of the day.

What about our roads and bridges? Eventually, they would have to break up, right?

Not as quickly as you might think. Here's a puzzle I once heard:

Imagine you tied a rope tightly around the Earth, so it was hugging the surface all the way around. 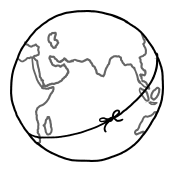 Now imagine you wanted to raise the rope one meter off the ground.

How much extra length will you need to add to the rope?

Though it may seem like you'd need miles of rope, the answer is 6.28 meters. Circumference is proportional to radius, so if you increase radius by 1 unit, you increase circumference by 2π units.

Stretching a 40,000-kilometer line an extra 6.28 meters is pretty negligible. Even after a day, the extra 5.4 kilometers would be handled easily by virtually all structures. Concrete expands and contracts by more than that every day.[5]Lawrence Grybosky, Thermal Expansion and Contraction

After the initial jolt, one of the first effects you'd notice would be that your GPS would stop working. The satellites would stay in roughly the same orbits, but the delicate timing that the GPS system is based on would be completely ruined within hours. GPS timing is incredibly precise; of all the problems in engineering, it's one of the only ones in which engineers have been forced to include both special and general relativity in their calculations.

Most other clocks would keep working fine. However, if you have a very precise pendulum clock, you might notice something odd—by the end of the day, it would be three seconds ahead of where it should be.

You might notice the difference in weight on a scale, but it's not a big deal. Gravity varies by this much between different cities already. This is a good thing to keep in mind if you buy a digital scale. If your scale has a precision of more than two decimal places, you need to calibrate it with a test weight—the force of gravity at the scale factory isn't necessarily the same as the force of gravity at your house.

While you might not notice the increased gravity just yet, you'd notice the expansion. After a month, you'd see a lot of cracks opening up in long concrete structures and the failure of elevated roads and old bridges. Most buildings would probably be ok, although those anchored firmly into bedrock might start to behave unpredictably.[7]Just what you want in a skyscraper.

At this point, astronauts on the ISS would start getting worried. Not only would the ground (and atmosphere) be rising toward them, but the increased gravity would also cause their orbit to slowly shrink. They'd need to evacuate quickly; they'd have at most a few months before the station reentered the atmosphere and deorbited.

After a year, gravity would be 5% stronger. You'd probably notice the weight gain, and you'd definitely notice the failure of roads, bridges, power lines, satellites, and undersea cables. Your pendulum clock would now be ahead by five days.

What about the atmosphere?

If the atmosphere isn't growing like the land and water are, air pressure would start dropping. This is due to a combination of factors. As gravity increases, then air gets heavier. But since that air is spread out over a larger area, the overall effect would be decreasing air pressure.

On the other hand, if the atmosphere is also expanding, surface air pressure would rise. After years had passed, the top of Mt. Everest would no longer be in the "death zone".[8]See What-If #64. On the other hand, since you'd be heavier—and the mountain would be taller—climbing would be more work.

After five years, gravity would be 25% stronger. If you weighed 70 kg when the expansion started, you'd weigh 88 kg now.

Most of our infrastructure would have collapsed. The cause of the collapse would be the expanding ground below them, not the increased gravity. Surprisingly, most skyscrapers would hold up fine under much higher gravity.[9]Although I wouldn't trust the elevators. For most of them, the limiting factor isn't weight, but wind.

After 10 years, gravity would be 50% stronger. In the scenario where the atmosphere isn't expanding, the air would become thin enough to be difficult to breathe even at sea level. In the other scenario, we'd be ok for a little while longer.

After 40 years, Earth's surface gravity would have tripled.[10]Over decades, the force of gravity would grow slightly faster than you'd expect, since the material in the Earth would compress under its own weight. The pressure inside planets is roughly proportional to the square of their surface area, so the Earth's core would be squeezed tightly. At this point, even the strongest humans would only be able to walk with great difficulty. Breathing would be difficult. Trees would collapse. Crops wouldn't stand up under their own weight. Virtually every mountainside would see massive landslides as material sought out a shallower angle of repose.

Geologic activity would also accelerate. Most of the Earth's heat is provided by radioactive decay of minerals in the crust and mantle,[12]Although some radioactive elements, like uranium, are heavy, they get squeezed out of the lower layers because their atoms don't mesh well with the rock lattices at those depths. For more, see this chapter and this article. and more Earth means more heat. Since the volume expands faster than the surface area, the overall heat flowing out per square meter will increase.

It's not actually enough to substantially warm the planet—Earth's surface temperature is dominated by the atmosphere and the Sun—but it would lead to more volcanoes, more earthquakes, and faster tectonic movement. This would be similar to the situation on Earth billions of years ago, when we had more radioactive material and thus a hotter mantle.

More active plate tectonics might be good for life. Plate tectonics play a key role in stabilizing the Earth's climate, and planets smaller than Earth (like Mars) don't have enough internal heat to sustain long-term geologic activity. A larger planet would allow for more geologic activity, which is why some scientists think that exoplanets slightly larger than Earth ("super-Earths") could be more friendly to life than Earth-sized ones.[11]Sasselov, Dimitar D.. The life of super-Earths: how the hunt for alien worlds and artificial cells will revolutionize life on our planet. New York: Basic Books, 2012.

After 100 years, we'd be experiencing over six gees of gravity. Not only would we be unable to move around to find food, but our hearts would be unable to pump blood to our brains. Only small insects (and sea animals) would be physically able to move around. Perhaps humans could survive in specially-built controlled-pressure domes, moving around by keeping most of our bodies submerged in water. 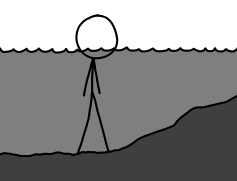 Breathing in this situation would be difficult. It's hard to suck in air against the weight of the water, which is why snorkels can only work when your lungs are near the surface.

Outside of low-pressure domes, the air would become unbreathable for a different reason. At somewhere around 6 atmospheres, even ordinary air becomes toxic.[13]R.M. Franz and P.C. Schutte, Barometric hazards within the context of deep-level mining, The Journal of The South African Institute of Mining and Metallurgy Even if we'd managed to survive all the other problems, by 100 years, we'd be dead from oxygen toxicity. Toxicity aside, breathing dense air is difficult simply because it's heavy.

When would the Earth eventually become a black hole?

It's hard to answer that, because the premise of the question is that the radius is steadily expanding while the density stays the same—whereas a black hole, the density increases.

The dynamics of really huge rocky planets aren't often analyzed, since there's no obvious way that they could form; anything that large will have enough gravity to gather hydrogen and helium during planet formation and become a gas giant.

At some point, our growing Earth would reach the point where adding more mass causes it to contract, rather than expand. After this point, it would collapse into something like a sputtering white dwarf or neutron star, and then—if its mass kept increasing—eventually become a black hole.

But before it gets that far ...

It's a shame humans wouldn't live this long, because at this point, something really neat would happen.

As the Earth grows, the Moon would, like all our satellites, gradually spiral inward.[14]Plummer, H. C., Note on the motion about an attracting centre of slowly increasing mass, Monthly Notices of the Royal Astronomical Society, Vol. 66, p.83 After several centuries, it would be close enough to the swollen Earth that the tidal forces between Earth and the Moon would be stronger than the gravitational forces holding the Moon together.

When the Moon passed this boundary—called the Roche limit—it would gradually break apart ...

... and Earth would, for a short time, have rings.